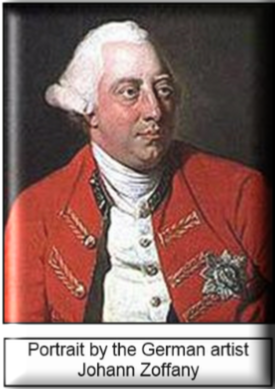 n was one of the longest in British history, and certainly one of the most eventful. The first twenty years (G3a) were dominated by the War of American Independence; the second (G3b) by the French Revolution and the Revolutionary Wars; and the third, as we shall see, by the Napoleonic Wars - not to mention continuing troubles in Ireland. The last twenty years of his reign were marred, however, by a complete mental breakdown. In 1810 his condition, which had started as early as 1756 and worsened over the years, became so severe that his son, the Prince of Wales was appointed Prince Regent to represent the monarch in the affairs of the state.

As we shall see, in the year the king was relieved of his official duties, the French leader, Napoleon Bonaparte was at the height of his power.  Having crowned himself emperor in 1804, he had embarked on a campaign of conquest which, by 1810, had virtually placed the whole of Europe under his authority, directly or by puppet monarchs - a number from his own family. A string of brilliant victories, notably at the battles of Austerlitz, Jena and Friedland, had crushed the resistance of Austria and Prussia, and forced Russia into an uneasy partnership. Furthermore, his Continental System, a blockade of British commerce set up in 1806, was calculated to bring Britain to its knees, the one enemy he had so far failed to bring to heel.

Throughout these final years George III remained as popular, if not more so, with the British public. Having become a symbol of national resistance during the latter stages of the French Revolution, and the wars that this spawned, he was now seen as a father figure, a guardian of the country’s freedom against the French tyranny that had engulfed continental Europe. And there was, too, a great deal of public sympathy over the bouts of illness that he suffered, and for his genuine fatherly concern over the unseemly conduct of his degenerate son and heir, the Prince of Wales, (not to mention the behaviour of his other sons and that of his own brothers!). “Farmer George”, as he was affectionately known, had become one with his people.

As we have seen, that had not always been the case. In coming to the throne in 1760 his determination to take an active part in government put him at odds with his parliament and people. Out of step with the times, he sought a conspicuous role in government at a time when the Glorious Revolution and the reigns of two German-speaking, “Hanovarian” kings had put Britain firmly on the path towards a constitutional monarchy. Taking a leaf out of the politician’s book, he used bribery and patronage to form his own party in parliament, the so-called “King’s Friends”.

It was by such means that he was able to play such a significant role in the dispute with the American colonists. He ignored their protests and opposed compromise at every step, fully endorsing, if he did not initiate, the punitive measures which eventually led to their rebellion. It is hardly surprising that he should regard the eventual victory of the colonists as a personal failure and even contemplate abdication. And this attempt to reassert royal authority came to the fore as late as 1801 when he forced his able minister William Pitt to resign rather than agree to Catholic emancipation, a move which Pitt rightly saw as a necessary corollary to the union with Ireland and the hope of putting an end to rebellion. It was an opportunity missed, and one which would have gone a long way to ease the problems which had bedevilled Anglo-Irish relations throughout his reign.

However, under Pitt’s second ministry, starting in 1804, the king took little if any part in the affairs of state, mainly due, no doubt, to his deteriorating health. Indeed, it was during this period that cabinet government really took hold, with its principle of collective responsibility and allegiance to the prime minister rather than the monarchy. Now freed from controversy, and helped along by victories such as those of Trafalgar and Waterloo, George was viewed in even greater esteem. It was not difficult to see why. A decent family man who was devoted to his wife and children (all fifteen of them!), he possessed the common touch and, unlike his predecessors, spoke the language of his people. Nor could his loyalty and devotion to duty be ever questioned. Despite his early attempts to be a 17th century monarch, his

motives were always well-intentioned. Throughout his long reign he had the welfare of his country and his subjects at heart. “I glory in the name of Britain”, he once said, and he was true to his word.

And he was, too, a man of culture. Today, the British Museum houses his collection of books - some 65,000 - and in 1768 he founded and helped towards the cost of the Royal Academy of Art. He was also the first British monarch to take a real interest in science, including astronomy, and his nickname “Farmer George” was well earned. He carried out experiments in agriculture on his Richmond and Windsor estates, and contributed to Arthur Young’s Annals of Agriculture. It was indeed sad that the last years of his life should be passed in such torment. Apart from being permanently deranged, he eventually became both blind and deaf before he died at Windsor towards the end of January 1820. 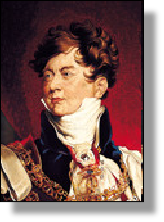 It was during these troubled, twilight years of his life that his eldest son, whom he despised so much, became Prince Regent, and took over the duties of the monarch. As we shall see, he was hardly a popular figure with the public and the bulk of parliament. His gambling, drinking and womanizing, not to mention his incredibly extravagant life-style, hardly endeared him to his people at a time of increasing economic hardship. In politics, too, he had gone out of his way to associate with Charles James Fox and his Whig allies, his father’s adversaries. It must be said, however, that his waywardness might be accounted for in part, at least, by the strict upbringing he had endured at the hands of his father.

Ironically enough, his “reign” was marked by a triumphant end to the Napoleonic Wars. Napoleon, his army devastated by its retreat from Moscow in 1812, was overwhelmed at the Battle of the Nations in 1813, and then, following his return from Elba, was finally defeated at the Battle of Waterloo. The British general the Duke of Wellington led the Allies to victory following his success in the Peninsular War. The Congress of Vienna confirmed the rise of Russia, reinstated Austria and Prussia as great powers, and recognised Great Britain as possessing the world’s greatest sea power and colonial empire.

But alongside these triumphs went a host of domestic problems. The cost of the prolonged period of war brought economic disaster. There was mass unemployment, and widespread poverty, exacerbated by the Corn Law of 1815, which kept out foreign grain and drove up the cost of bread. And the downside effects of the Industrial Revolution were beginning to be felt. Whilst the rich grew richer the poor grew poorer. The Luddite movement of 1811 was aimed at destroying the steam-driven machines which, on the land and in the factories, were steadily replacing manual labour and skills. In 1817, it would seem, there was even an attempt upon the life of the Prince Regent. Meanwhile, the demand for electoral reform culminated in the Peterloo Massacre of 1819, and the passing of repressive laws to stifle further dissent.

To this period (1803-1820) belongs some of the most famous names in literature, including (all in the Index) the poets Goethe, Wordsworth, Keats, Shelley and Byron. Also worthy of note are the scientists Humboldt and Davy, the painters Goya and Turner, the philosophers Hegel and Schelling, and the brilliant composer Beethoven.