xxxxxThe Scottish civil engineer Thomas Telford began work as a stonemason, but, after working in Edinburgh, London and Portsmouth, acquired a remarkable understanding of civil engineering. During a long career he constructed roads, bridges and canals throughout Great Britain. He is particularly remembered for his building of the Caledonian Canal in Scotland. This waterway, begun in 1803, required the construction of 23 miles of canal, and was in use by 1822. But his greatest single accomplishment was the suspension bridge over the Menai Straits in north Wales, begun in 1819. When completed in 1826 it was the world’s longest bridge, spanning a distance of 580 ft. In his road-building programme he introduced new methods, insisting above all upon a foundation of heavy stone blocks. As we shall see, his contemporary and fellow Scotsman John Loudon McAdam, put forward his own, cheaper method of road construction and, until the advent of the motor car and heavier vehicles, this proved the more popular. 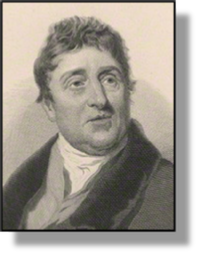 xxxxxThe Scotsman Thomas Telford, the son of a shepherd, was born in Westerkirk, Dumfries, and began work as an apprentice to a stonemason. He worked for a time in Edinburgh and then, at the age of 25, moved to London. Here, under the direction of the architect William Chambers, he assisted in building extensions to Somerset House. Two years later he found employment in Portsmouth dockyard and, by this time, being both ambitious and hard working, he had virtually taught himself civic engineering. There followed a long and distinguished career during which he gained a worldwide reputation for his construction of roads, bridges, and canals. In recognition of his achievements, he was appointed the first president of the British Institution of Civil Engineers when it was founded in 1818.

xxxxxHis first major appointment, taken up in 1786, was as the official surveyor for the County of Shropshire. It was while there that he built three bridges over the River Severn, the one at Buildwas being made of cast iron. Then, as engineer to the Ellesmere Canal Company from 1793, he built impressive aqueducts over the Ceirog and Dee valleys in Wales, using for the first time large troughs made up of cast-iron plates and held firmly in masonry. In 1803 he returned to Scotland to assist in the development of the Scottish Highlands. Apart from harbour works, including improvements at Aberdeen 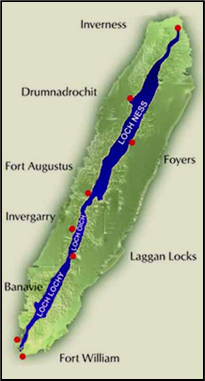 and Dundee, he built some 900 miles of roadway - notably the road from Carlisle to Edinburgh - and constructed around 120 technically advanced bridges. His oldest surviving metal bridge, built in 1814, is over the River Spey at Criagellachie. 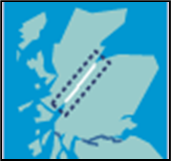 xxxxxBut his biggest challenge in Scotland was his overall responsibility for the building of the Caledonian Canal, begun in 1803. This waterway, surveyed by James Watt, and running entirely across northern Scotland from the south west to the north east, was opened in 1822, though it was not finally completed until 1847. Over 60 miles long, it required the making of 23 miles of canal to link up a chain of lochs which included Lochy, Oich and Ness. Until it became too narrow to take the size of modern vessels, this canal, linking as it does the North Atlantic with the North Sea, was extensively used, and proved of great commercial importance.

xxxxxBut Telford’s greatest single achievement was the designing and building of the suspension bridge over the Menai Straits, thereby connecting the island of Anglesey with the Welsh mainland at Bangor. He began this work in 1819 after completing a road improvement scheme from Shrewsbury to 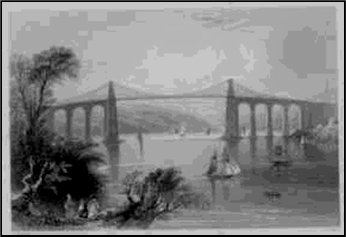 Holyhead. The two-lane bridge across the straits, one of the first bridges to use the suspension method, was an impressive feat of engineering and the finest of its day. The roadway was supported by means of sixteen chain cables slung from masonry towers at either end. The chains themselves were made up of 935 wrought iron bars bolted together by iron pins. Spanning a distance of 580 feet, it was the world’s longest bridge when opened in 1826. It is still in service today, but has obviously been updated. In 1893 its timber deck was replaced by a steel one, and in 1939 the wrought iron chains, somewhat corroded, were exchanged for steel cables. (The first modern chain suspension bridge was built in Pennsylvania by the American James Finley in 1796.)

xxxxxAmong his many other works was a new tunnel for the Trent and Mersey Canal at Harecastle, Staffordshire, a new canal from Wolverhampton to Nantwich, and the St. Katharine Docks in London. And in the summer of 1808 he worked in Sweden, advising on the building of the Gota Canal.

xxxxxYet another of Telford’s notable contributions to Britain’s transport system, and in many ways the most significant, was the marked improvements he introduced in road-building techniques - alongside his fellow Scotsman and engineer John Loudon McAdam. Over his long career he rebuilt many Roman roads, and he constructed a number of new highways. Construction was made up of three levels - a foundation of heavy stone blocks (the “Telford base”), covered with a six inch course of compacted smaller stones, and topped with an inch or more of gravel. The centre of the road was raised, as in a crown, to ensure good drainage.

xxxxxIncidentally, Telford’s basic design in road-making almost certainly owed a great deal to the French engineer Pierre-Marie-Jérome Trésaguet (1716-1796). He served for many years in his country’s Bridges and Highways Department, and in 1775 he produced a detailed account of a method of road building based on successive layers of broken stones. This account was circulated to many parts of Europe, including Britain and Sweden. ……

xxxxx…… Likewise Telford’s bridge structure was somewhat modelled on that of the first bridge to be built of iron, Coalbrookdale Bridge, constructed in 1779 by Abraham Darby. In 1795 during severe flooding, this bridge was the only one in the area to survive because it had no stone pillars and the flood waters simply flowed through it. This fact did not go unnoticed by Telford. ……

xxxxx…… And one famous suspension bridge that Telford did not design was that which today spans the Avon Gorge at Clifton near Bristol. He submitted a design for it but, as we shall see, it was the one put forward by the great engineer Isambard Kingdom Brunel which was adopted in preference. However, in 1963 the new town of Telford, built in Shropshire, England, some 20 miles north-west of Birmingham, was named after him.

xxxxxAnother Scottish engineer who did pioneer work in road building at this time was John Loudon McAdam (1756-1836). After making a fortune working for his uncle, a New York merchant, he came back to Scotland in 1783 and carried out experiments at his own expense to find a better method of making roads. He came up with the idea that an earth foundation was quite acceptable provided one used three good layers of broken granite and small stones, well rammed down, and a totally dependable drainage system. Relatively cheap in material and quick to make, it proved popular in Britain, Europe and the United States, but with the coming of motor traffic the surface had to be sealed with tar or asphalt, and the foundation proved too weak as vehicles became heavier. For many years he worked as a surveyor general of roads for Bristol and district, and in 1827 was put in charge of all major roads in Britain. 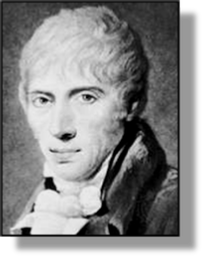 xxxxxAnother great road builder at this time was the Scottish engineer John Loudon McAdam (1756-1836). Unlike Telford, who placed emphasis upon a firm, deep foundation, McAdam argued that a foundation made of earth was sufficient provided that it was well drained. He laid down an 8 inch layer of broken granite and small stones, bound together with gravel or slag and rammed directly down onto an earth base. At the same time, however, he ensured adequate and rapid drainage to roadside ditches by building the road surface higher than the surrounding ground and giving it a marked camber. Relatively cheap in material and quick to make, by the end of the 19th century this method, known as “macadamization”, had been generally adopted for most main roads in Europe and the United States. His method of road construction was described in his Remarks on the Present System of Road Making, written in 1816, and his Practical Essay on the Scientific Repair and Preservation of Roads, published in 1819. 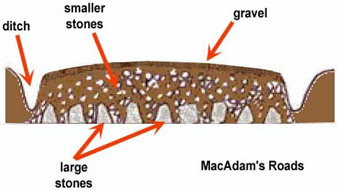 xxxxxHowever, with the coming of the motor age, rubber tyres loosened the small stones, and other means had to be found, such as hot tar or asphalt cement, to seal the surface (hence the name “tarmac”). And at a later date the sheer weight of vehicles using the roads required a foundation more in keeping with Telford’s more demanding technique.

xxxxxMcAdam was born in Ayr. He emigrated to the United States at the age of fourteen, and made a fortune working for his uncle, a merchant in New York. He returned to Scotland thirteen years later and, taking an interest in road construction, carried out a series of experiments at his own expense. He was appointed highway commissioner for Bristol in 1806 and, such was his success, that four years later he was made surveyor-general of all the roads in the Bristol area, and in 1827 was put in charge of all the major roads in Britain. In this capacity he played a large part in ensuring that public roads became the responsibility of the government and were financed out of taxes. 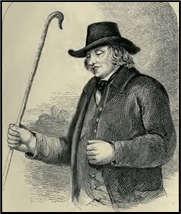 xxxxxIncidentally, a road builder extraordinaire was the Englishman John Metcalf, who died in 1810. Blind from the age of six - caused by smallpox - he nonetheless led a full and active life. Known locally as Blind Jack of Knaresborough, he earned his living by playing the violin and taking on various jobs. In about 1765 he turned his hand to road making and, over the next 30 years, organised the building of some 180 miles of road in his native Yorkshire and surrounding counties. At one time, having to cross an area of marshland, he overcame the problem by laying down a series of rafts made out of bundles of heather.