xxxxxAs we have seen, the Union of Kalmar in 1397 (R2) united the kingdoms of Norway, Sweden and Denmark under a single monarch. Then in 1524 (H8), by the Treaty of Malmo, Sweden gained its independence and, given leaders like Gustavus Adolphus and Charles XII, went on to become an important European power until its defeat by the Russians at the Battle of Poltava in 1709. A century later, faced with no heir to their throne, the Swedes chose one of Napoleon’s Marshals, Jean-Baptiste Bernadotte, as their crown prince Charles John. He assumed power in 1810 and, changing his allegiance, promptly came to terms with Russia, Britain and Prussia, promising them his support in exchange for their agreeing to his seizure of Norway. After helping in the defeat of Napoleon in 1813, he attacked Denmark and forced them to give up Norway by the Treaty of Kiel in January 1814. Norway managed to achieve internal self-government, but did not gain independence from Sweden until 1905. 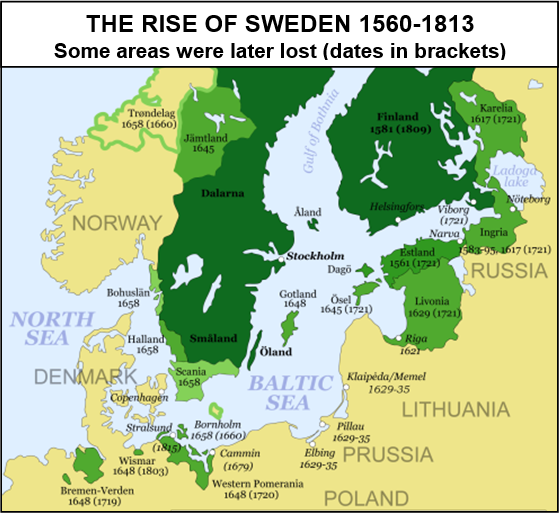 xxxxxAs we have seen, by the Union of Kalmar in 1397 (R2), Denmark, for many years the most powerful and successful of the Scandinavian countries, managed to unite the kingdoms of Norway, Sweden and Denmark under a single monarch - Eric of Pomerania. This union survived for well over a century, but there was constant conflict between the Danes and the Swedes, and eventually Sweden, under its able leader Gustav Vasa, achieved independence by the Treaty of Malmo in 1524 (H8). The next 200 years saw the rise of Sweden as a great power (see map). Gustavus Adolphus and Charles XII made their country a major force in European politics (illustrated), but following the Battle of Poltava in 1709, when the Swedes were soundly defeated by the Russians, the days of greatness were over. The Swedish empire was dismembered. Russia took control of a large part of Finland, and most of the German provinces were given over to Britain, Hanover or Prussia. Some sort of parliamentary system was introduced and, for many years, this led to bitter in-fighting between the parties known as the “Hats” and “Caps”.

xxxxxThe coming of the Napoleonic Wars brought changes to Scandinavia. The union of Denmark and Norway tried to remain neutral in the war between France and Great Britain but, being obliged to join Napoleon’s blockade of British ports - the so-called Continental System - both countries paid a heavy price. Quite apart from the British seizure of the entire Danish fleet in 1807, the blockade spelled economic disaster for both countries. The ban on grain, fish and timber exports led to an economic slump and widespread hunger. With the defeat of Napoleon at the Battle of Leipzig in 1813, ports could be reopened to British trade, but it took many years to recover. Furthermore, by then many influential groups in Norway were looking for a way out of their country’s dependence upon Denmark. However, the idea of Norwegian independence received no support from the great powers. Indeed, with their connivance, as we shall see, the country was in the hands of a new master - Sweden - by July 1814. 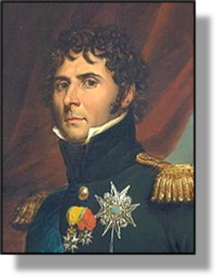 xxxxxSweden’s take-over of Norway was due to a change of leadership in 1809. In that year a palace revolution overthrew the insane Gustav IV, and put the infirm and childless Charles XIII on the throne. Then the Riksdag, in favour of keeping on good terms with the French and impressed by the leadership qualities of one of Napoleon’s marshals, Jean-Baptiste Bernadotte (1763-1844) elected him crown prince. Taking the name of Karl Johan (Charles John) he arrived in Sweden in October 1810. Bernadotte had served Napoleon well in a number of his campaigns, but at one time he was suspected of plotting against his Emperor, though this was never proved. Now, as the virtual ruler of Sweden, he was able to show his true colours. Reckoning that the retaking of Finland - ceded to Russia in 1809 - would be too difficult an undertaking, and that, in any case, Napoleon was heading for defeat, he set out to acquire Norway as part of his new domain. In 1812 he made an alliance with Tsar Alexander, promising Sweden’s support in exchange for his agreeing to his seizure of Norway. Thus when Napoleon invaded Russia in June of that year, he sided with the Tsar and later that year even met him to discuss the possibility of his returning to France and playing a leading role once Napoleon had been defeated - an idea that the French were hardly likely to accept!

xxxxxIn the spring of 1813 Charles John then approached the British and the Prussian governments, offering the same terms - support against Napoleon in exchange for their acquiescence in his take-over of Norway. Both agreed, and in the final offensive against France he was appointed the commander in chief of the northern allied army made up of Swedish, Prussian and Russian forces. In this campaign, however, which ended with the Battle of Leipzig in October 1813, he kept in reserve a substantial part of his army - including the bulk of his Swedish troops - and, once the French had been defeated, led it against Denmark, attacking from the south. The Danes had no chance against such a force and in January 1814 King Frederick VI was obliged to accept the Treaty of Kiel.

xxxxxBy this treaty, Denmark had to cede Norway to Sweden, held since 1388. Though it retained the old Norwegian dependencies of Iceland, the Faroes, and Greenland, this treaty was a bitter blow for Denmark. It was never again to hold such a dominant position in the Baltic region. However, the Danes did make a last-minute effort to retain Norway. In collusion with Christian Frederick, governor of Norway, an assembly was convened at Eidsvoll, some 40 miles north of Oslo (then called Christiania). This drew up a constitution in May and elected Christian Frederick to the Norwegian throne. This outward show of rebellion against the Treaty hardly deterred the Swedes. They invaded Norway two months later and quickly took control of the country. Christian Frederick lost his throne - along with Danish hopes of a reunion - but the constitution survived. On coming to power, Charles John - known later as Charles XIV - accepted the document drawn up at Eidsvoll with only minor modifications, thereby giving Norway a constitutional monarchy and a government responsible for its own national affairs. Having acquired this element of political freedom, the remainder of the century was to be taken up with the struggle for complete independence. This was eventually achieved in 1905, but not before a number of constitutional crises.

xxxxxIncidentally, Charles John became king of Sweden and Norway (Charles XIV) upon the death of Charles XIII in February 1818. Good relations with both Russia and Great Britain ensured a long period 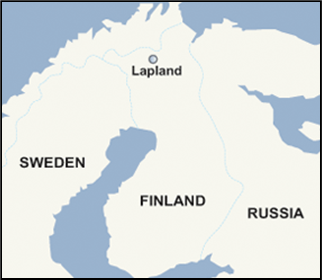 of peace, and his domestic reforms helped to expand trade and agriculture. His rule, autocratic in style, aroused a fair amount of opposition in both countries, but he remained in power by dint of his firm administration, and was the founder of the present royal dynasty of Sweden.

xxxxxIn its bid for a national identity, Finland fared no better than her Baltic neighbours. Having been a dependency of Sweden for some 500 years, Russia began to seize parts of the country, first under Peter the Great in 1721 and then during the reign of Empress Elizabeth in 1743.

xxxxxThen in 1809, during the Napoleonic Wars, Sweden was forced to cede the whole country to Tsar Alexander, and the rest of the 19th century witnessed a long and bitter uphill struggle by the Finns to throw off Russian domination. Following the Russian Revolution of 1917, a republic was eventually declared in 1919. 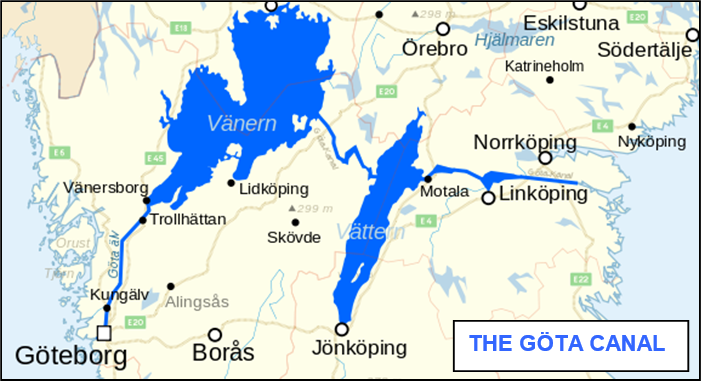 xxxxxIt was during the reign of Charles XIV that the Göta Canal was completed. The idea of a waterway that crossed southern Sweden from west to east was first considered during the reign of Gustavus Vasa in the 16th century, but the work was not begun in earnest until the early 1800s. Made up of a succession of rivers and lakes linked together by canals, it provided inland navigation from the port of Göteborg on the west coast to Söderköping on the Baltic. Some 60,000 men, digging by hand, were employed in the construction of the 50 miles of artificial waterways needed, and the work was finally completed in 1832. Sweden’s two largest lakes, Lake Vänern and Lake Vättern, form part of the system, and there are 58 locks along its way.

xxxxxThe Scottish civil engineer Thomas Telford, who began work on the Caledonian Canal in Scotland in 1803, was invited over to Sweden to give his advice. He spent six weeks during the summer of 1808, working out a detailed layout of the canal and the siting of its many locks.

xxxxxThe total distance from Göteborg to Stockholm via the Göta Canal is 347 miles compared with 590 miles by sea. However, since the introduction of steam vessels and the railway, the canal has lost much of its commercial importance. It is still used for local trading, but it now serves as a major tourist attraction with voyages along it taking three days.

Finland and the Göta Canal