xxxxxIt was in 1804 that the French weaver Joseph Marie Jacquard patented his automated loom, using a punched-card system to determine the order of the threads in the warp. Later he developed this method further, producing a programme which could repeat the pattern required. This new means of weaving patterned fabrics enabled the fast and accurate production of more intricate designs. Workers in the industry, fearing unemployment, destroyed some of these machines, but by 1812 some 11,000 were in use in France alone. Later, in the mid-1830s, the punched-card system was used by the English mathematician Charles Babbage when he constructed his “Analytical Engine”, the forerunner of the modern digital computer. In fact, perforated cards were used in the early computers, developed in the 1940s. 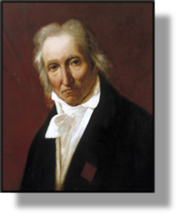 xxxxxJoseph Marie Jacquard was born in Lyon, the son of a poor silk weaver. He assisted his father and, when he died, inherited his two looms. He opened up a small weaving business, but struggled to make a living. It was around 1790 that he began working on an automated loom, but the French Revolution put paid to his research. He fought on the side of the Revolutionaries, and it was not until the turn of the century that he eventually came up with an ingenious punched-card system which determined the order of the threads in the warp. Patented in 1804, this innovation proved so successful in the weaving of patterned fabrics that on later machines he fitted the perforated cards into a continuous loop. This provided a complete programme which not only repeated the pattern, but could also be used over and over again.

xxxxxThe Jacquard loom, the basis of the modern automatic version, meant that weavers had no longer to intervene in the production of a fabric once the pattern had been planned and “punched out”. Furthermore, this automatic control enabled the introduction of more intricate patterns, all achieved accurately and at high speed. Not surprisingly this invention was seen as a threat by the workers in the industry. In Lyon and other centres, machines were smashed for fear of unemployment. Nonetheless, within ten years over 11,000 such looms were at work in France, and many were employed in other countries. 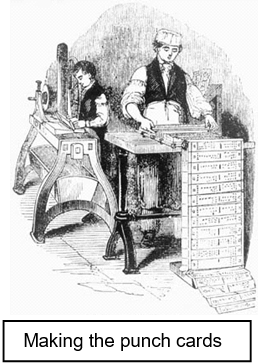 xxxxxJacquard did well out of it. His loom impressed Napoleon and he was granted a state pension as well as a royalty on each machine. Later, in 1819, he was awarded a gold medal and the Cross of the Legion of Honour.

xxxxxThe use of punched cards (illustrated here) was a break-through of some significance. As we shall see, the English mathematician Charles Babbage saw them working on one of Jacquard’s looms and used the idea in the mid-1830s when he was working on what he called his “Analytical Engine”, a mechanical device that proved the precursor of the modern digital computer. He used the cards as a sort of memory unit. Nothing much came of this idea at the time, but, in fact, punched cards were used in the very early computers which came into use during the 1940s, and were developed further until largely replaced by electronic devices some twenty years later. 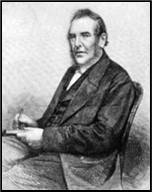 xxxxxMeanwhile, the method was put to good use in some other areas. In about 1848, for example, the Welsh engineer and tool-maker Richard Roberts (1789-1864) 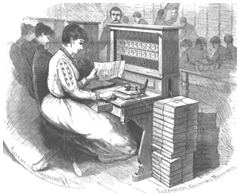 (illustrated) invented an automated machine for putting holes in steel plates, using punched cards to determine the size and pattern of the holes. Later, in the United States, the statistician Herman Hollerith (1860-1929) employed perforated cards in a machine of his own making (illustrated) in order to sort out data from the 1890 census. The analysis was achieved in less than half the time taken at the previous census, conducted ten years earlier.

xxxxxIncidentally, the first “Jacquard loom” - as noted above - was not viewed kindly by his fellow weavers in Lyon. They smashed it up and threatened Jacquard himself. He wrote at the time: "The iron was sold for scrap iron, the wood for kindling, while I was delivered over to universal ignominy”. But there was a happy ending. Later, in 1840, a statue was built in his memory, and erected on the very spot where his revolutionary loom had been destroyed.