xxxxxNapoleon’s Berlin Decree of 1806, and his Milan Decree the following year, closed all Europe to British trade. Known as the Continental System, this was seen as a means of ruining the British economy, and bringing Britain to the peace table, cap in hand. But the British, masters of the sea, were in a good position to retaliate and did so with a blockade of all continental ports. This created serious economic hardship for France and her allies, and first Portugal and then Russia decided not to enforce the blockade. As a result, Napoleon invaded and occupied Portugal in 1808, but was then faced with the Peninsula War, a serious strain on his resources. Then in 1812 his invasion of Russia ended in the disastrous retreat from Moscow, and marked the beginning of the end for the French emperor. Thus his Continental System had brought both economic and military failure. But in the meantime the British also ran into trouble. Their assumed right to search all ships as part of their continental blockade, angered the Americans and led to a conflict between the two countries, the indecisive War of 1812.

THE BERLIN DECREE AND THE CONTINENTAL SYSTEM 1806 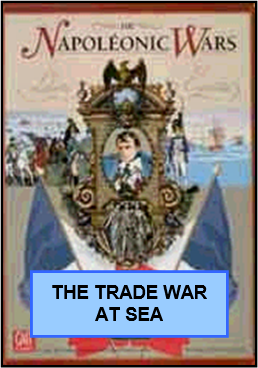 xxxxxAs we have seen, it was after the decisive defeat of the Prussians at the Battles of Jena and Auerstadt that Napoleon entered Berlin in October 1806. It was here in the following month that he announced his Berlin Decree, closing all continental ports to British vessels, and placing a blockade on all their ports, both for neutral states as well as French allies. Known as the Continental System, this was an ambitious scheme designed to bring about the collapse of Britain by means of a stranglehold on its vital overseas trade. Immune as the British were from direct military attack, these measures were seen by Napoleon as the one and only way to bring Britain to heel. He envisaged that this system, rigorously enforced, would ruin the British economy, bankrupt the country, and bring the British government to the peace table, cap in hand.

xxxxxNapoleon’s economic strategy was not without effect. It certainly did put a strain on the British economy. Initially there was a loss of exports, and a fall in gold reserves, but there were plenty of holes in the system and a great deal of smuggling developed. Furthermore, the British ruled the waves - after if not before the Battle of Trafalgar - and they had it in their power to retaliate against such maritime restrictions. There followed, therefore, a series of measures and counter-measures. By an Order in Council in January 1807, the British prohibited the vessels of all neutral nations from trading between French ports or between ports of any nation allied to France. And to add weight to their words, in September of that year a British fleet bombarded Copenhagen and seized the Danish fleet in an attempt to prevent Denmark from joining the system. And this was followed two months later by a second Order in Council placing a blockade upon all French ports and those of her allies. 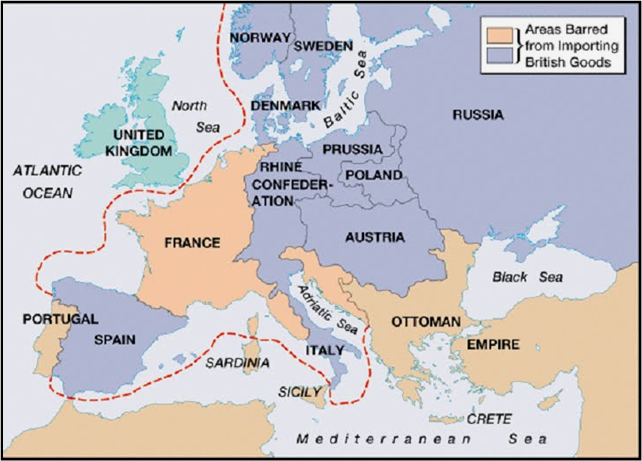 xxxxxBy way of reprisal, Napoleon issued the Milan Decree in December 1807. This went so far as to declare that any vessel, from whatever nation, that had been stopped by the British or visited a British port, was to be regarded as a British vessel and treated as such. And when the British countered this by demanding that all neutral ships had to stop at a British port to be inspected and permitted to proceed, Napoleon reserved the right to seize any such vessel. By now, no vessel could avoid becoming embroiled in the trade war being waged on the high seas between the French and the British. Indeed, as we shall see, it was the right claimed by the British to search neutral vessels, together with their practice of “impressment” - seizing seamen from these vessels for service in the Royal Navy - that so angered the Americans and brought them into a conflict with the British, the indecisive War of 1812.

xxxxxBut long before this war came about, fighting had again erupted on the European continent. Whereas the British had begun to compensate for their loss of exports by opening up new, untapped markets in their colonial possessions, there was no such solution for the other countries of Europe. For them, including France, the British blockade brought severe hardship. The lack of colonial raw materials affected industries across the continent, and Atlantic ports, such as Amsterdam and Bordeaux, were badly hit. No amount of smuggling could remedy the situation. Soon there was open defiance. Portugal, a maritime country dependent upon trade - particularly with Great Britain - ignored the ban and in 1808, as we shall see, was invaded and occupied by Napoleon as a result. The Peninsula War which followed proved a constant and serious drain upon French financial and military resources, and contributed in no small measure to Napoleon’s downfall. And an event of even greater consequence occurred in 1810 when Russia, facing an economic crisis, withdrew from the Continental System. This led to Napoleon’s invasion and disastrous retreat from Moscow in 1812, a debacle that marked the beginning of the end for the French Emperor. 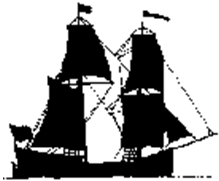 xxxxxThus the Continental System, the most promising means, it was thought, whereby France could rid itself of its one persistent enemy, not only failed economically but also backfired militarily. The Berlin Decree and subsequent economic sanctions carried with them the seeds of Napoleon’s final destruction on the battlefield. His empire, like many before it, began to crumble from within, proving once again that nationalism is a powerful historical force.