xxxxxIn 1813 the Swiss writer Johann Rudolf Wyss completed and published The Swiss Family Robinson. This adventure story, based on a manuscript written by his father, Johann David Wyss, and imitative of Daniel Defoe’s Robinson Crusoe, tells of a family’s experiences after being shipwrecked on an uninhabited tropical island. Despite its similarities to Defoe’s epic, it became a children’s classic and, translated into many languages, became one of the most popular stories ever written. 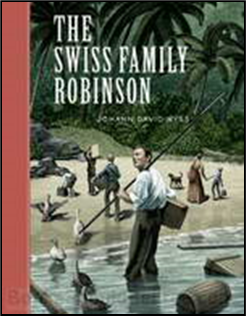 xxxxxIt was in 1813 that the Swiss writer named Johann Rudolf Wyss published The Swiss Family Robinson and, with this single volume, became famous overnight. Inxfact this tale of adventure, which was an immediate success and became one of the most popular stories ever written, was not entirely his work. He did the editing and wrote the ending, but it was based on a manuscript written by his father, Johann David Wyss (1743-1818), a pastor in Bern.

xxxxxIn his turn, Wyss the Elder, compiling it to entertain his four sons, had taken the main thrust of his story deliberately from Daniel Defoe’s Robinson Crusoe. It tells of the many ordeals faced by a family - and the commendable way it copes with them - after being shipwrecked on an uninhabited tropical island. There are clearly similarities with Defoe’s epic, but it had a wider appeal, had merits of its own, and, translated into many languages, became a children’s classic far and wide.

xxxxxBut Johann Rudolf Wyss was not without ability in his own right. He taught philosophy at Bern, collected and published Swiss tales and folklore, and in 1811 was the author of the Swiss national anthem, "Rufst du, mein Vaterland" (“When you call, my fatherland”). Sung to the tune of “God save the King”, it was replaced in 1961 by “The Swiss Psalm”.