xxxxxAs we have seen, the Battle of Leipzig in October 1813 marked the end of Napoleon’s empire. Despite putting up stubborn resistance, by March 1814 the Allies were in Paris, and he was forced to abdicate the following month. He was banned to the island of Elba, just off the north-west coast of Italy, but in March 1815 returned to France and, with the support of his former general, Marshal Ney, reached Paris. He remained in power for the next “Hundred Days”, but his offer to rule as a constitutional monarch, maintaining the peace, was rejected by the European powers then meeting at Vienna. As we shall see, he was eventually defeated at the Battle of Waterloo in June 1815.

NAPOLEON’S ESCAPE FROM ELBA AND HIS “HUNDRED DAYS”, March - June 1815 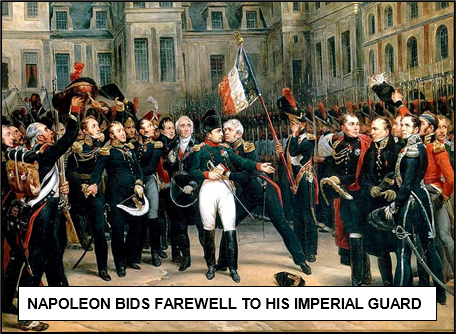 xxxxxAs we have seen, with the defeat of the French at the Battle of Leipzig in October 1813, Napoleon’s empire began to crumble. French rule was overthrown east of the Rhine, and in the west there was open defiance. By early 1814 Holland and Switzerland had renounced their allegiance, the British had captured Bordeaux, and the allies had crossed into northern France. But even at this late hour, Napoleon - continuing to show his military skill - won four battles before the invading armies eventually reached Paris at the end of March. Early the next month, however, learning that he had been deposed by the senate, he stood down in favour of Louis XVIII. Byxthe Treaty of Fontainebleau, held a week later (11th April), Napoleon abdicated and, retaining his title, was made sovereign ruler of Elba, (arrowed on map), a small island off the north-west coast of Italy. After a somewhat harrowing journey, during which he narrowly escaped assassination, he took up his new appointment at the beginning of May. At the end of that 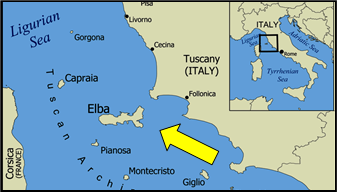 month the Congress of Vienna was convened to work out the peace settlement. To all intents and purposes the Napoleonic Wars were over once and for all.

xxxxxThe island of Elba was rather a small kingdom for one who had held sway over the greater part of Europe! Situated six miles off the west coast of Italy, it was 86 square miles in size, and had a population of around 50,000. He was permitted a personal escort of 400 volunteers, together with a household staff, and an annual income of two million francs, but his wife and son (François Charles Joseph Bonaparte) were put in the custody of Marie’s father, the emperor of Austria. He never saw either of them again.

xxxxxNo sooner had he arrived on the island than he was introducing political and economic reforms, but he also kept a wary eye on developments in France. There, he learnt, there was widespread discontent. The people may well have been pleased to see the last of the Emperor, but the return of the Bourbons in the person of Louis XVIII meant that the ideals of the Revolution were put on hold, and its achievements were in jeopardy. The émigrés who flocked back to France reopened the old class divisions, and the hatred and mistrust they had engendered. And on a personal note, the French government was refusing to pay his allowance, and there was talk at Vienna of his being moved out of Europe for security reasons. If he were going to make a comeback, then the sooner he made it the better. By mid-February he had made up his mind.

xxxxxOn the first day of March Napoleon landed at Cannes with a small contingent of his bodyguard and, travelling swiftly through the foothills of the Alps, reached Grenoble in four days. Here he called for the support of the French people, promising to save them from the tyranny of “priests and nobles”. In Paris, Louis XVIII, duly alarmed, sent General Ney to arrest Napoleon. Ney promised to “bring him back in an iron cage”, but when he met his erstwhile “Emperor” the memory of past glories proved too great to resist - both he and his men rallied to his side. So began Napoleon’s triumphant march to the capital. He arrived there just twenty-four hours after the king had made his escape to Ghent, and he was enthusiastically greeted as the people’s deliverer. Some of his former marshals, such as Devout and Soult, openly pledged their support, but others, however, kept their distance. They, like a large number of the public, were republicans at heart.

xxxxxIncidentally, the moving scene above - The Farewell of Fontainebleau - in which Napoleon reminds his Imperial Guard of the past glories and victories they had achieved together, was captured on canvas by the French artist Antoine Alphonse Montfort (1802-1884). Among the number of poets who were inspired by this event was the Englishman Lord Byron. ……

xxxxx……  Just 25 miles south of Elba lies the uninhabited island of Monte Cristo. This supplied the title of the hero in Alexandre Dumas’ historical romance The Count of Monte Cristo, published by the French novelist in 1844.

xxxxxNapoleon’s arrival in Paris on the 20th March 1815 marked the start of his return to power, his so-called “Hundred Days” (to the 29th June). Having promised the French people individual freedom and a greater share in government at a mass meeting in the capital - the so-called Champ de Mai - he held out to Europe’s monarchs the promise of peace. He would 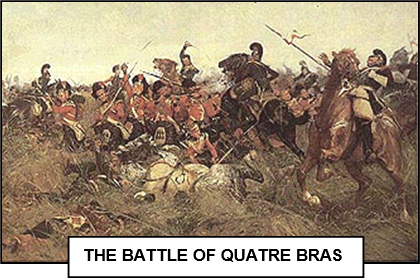 be a constitutional monarch, he solemnly declared, and faithfully observe the conditions laid down by the Treaty of Paris. But the powers assembled at Vienna would have none of it. He was immediately outlawed, a new alliance was formed, and the Duke of Wellington was appointed supreme commander of the Allied forces. Such a response, it must be said, hardly came as a surprise to Napoleon who, in fact, had already started to form a sizeable army. There was no shortage of veterans to answer his call to arms, their numbers bolstered by the return of thousands of prisoners released from Russia. By June he had a fighting force of 125,000 men.

xxxxxThat month Napoleon went on the offensive, searching out his enemies in Belgium before the Austrian and Russian forces were able to arrive in France. The Prussian army, led by Blücher, was at Liège, and the British were at Brussels. Hexhimself took on the Prussians, and on the 16th June defeated them at the Battle of Ligny. Onxthe same day Marshal Ney met an Anglo-Dutch force at the Battle of Quatre Bras. The result was indecisive, however, and the British commander, Wellington, withdrew his troops to a better position close to the village of Waterloo, nine miles south of Brussels. It was there, as we shall see (1815), that, two days later, Napoleon and Ney joined forces and prepared to take on the Anglo-Dutch army. It was seen by both sides as the deciding battle, in fact, and so it proved to be.

xxxxxIncidentally, MarshalXMichel Ney (1769-1815) was one of Napoleon’s most outstanding generals. He fought with distinction at the Battles of Jena, Eylau and Friedland, and for the courage he showed as rearguard commander during the retreat from Moscow, Napoleon dubbed him “the bravest of the brave”. He was wounded at Leipzig and, following the collapse of the Empire, swore allegiance to the Bourbon dynasty. For deserting his monarch and fighting for Napoleon at the Battles of Quatre Bras and Waterloo, he was subsequently found guilty of treason and shot. ……

xxxxx…… After his execution a rumour circulated that, in fact, the men of the firing squad had fired blanks and that Ney, having feigned death by bursting a bag of red liquid against his body, had then been helped to escape by members of the army. There is no real evidence to support this, but in November 1846 a school teacher named Peter Ney of Third Creek, North Carolina, claimed, on his death-bed, that

he was the one and only Marshal Ney! ……

xxxxx…… Duringxthe Hundred Days, another of Napoleon’s former generals, the brilliant cavalry commander Joachim Murat (1767-1815), having deserted Napoleon after the Battle of Leipzig, attempted to re-conquer Italy and keep his throne as king of Naples, but he was defeated at the Battle of Tolentino. He escaped to Corsica, but was later captured and shot.