Street lighting by gas comes to London in 1807.

The US Military Academy is established at West Point in the state of New York in 1802. The French academy is founded by Napoleon at Fontainebleau the following year, but has been at St. Cyr in Brittany since 1946.

The French physician René Laennec (1781-1826) invents the stethoscope in 1817 and, after using it, publishes his findings

Hansard, the work of the printer Thomas Hansard.

ThexBritish diplomat Lord Amherst, sent on a commercial mission to Peking in 1816, refuses to kowtow to the Emperor (bow low in

an act of submission) and the mission is a failure.

ThexPrado in Madrid is completed under Ferdinand VII in 1819 and is opened to the public as the Royal Museum of Painting. It becomes known as the National Museum of Spain in 1868.

In 1803 a large fireball is seen hurtling over the town of L’Aigle in Normandy, France.

There follows a violent explosion and thousands of

fall to the ground.

A carriage way across the Simplon Pass, ordered by Napoleon, is completed 1807. 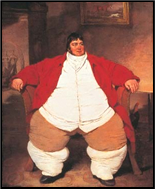 The Englishman Daniel Lambert, famous for his size (52 stone) and a

waistline of 112 inches, dies in 1809. His coffin had to be mounted on wheels. His gravestone stated that in personal greatness he had no equal!

(1776-1839) gives up her comfortable life and goes to live among the Druzes of western Syria (in today’s Lebanon).

The Krupp iron works, destined to become famous for its production of German armaments, is founded at Essen in 1811.

, is shot dead in the lobby of the House of

Commons by John Bellingham, a man with a grudge against the government - 11th May, 1812.

A short tale by the American story-teller Washington Irving (1783-1859) published in his Sketch Book of Geoffrey Crayon, Gent. in 1819, introduces the henpecked husband known as Rip Van Winkle. Chased from home by his wife, he steals a drink and this puts him to sleep for twenty years. He sleeps through the American War of Independence and wakes up to find that his wife is dead and

and no one in his village recognises him. 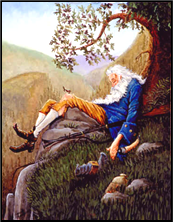 Whilexstudying at Oxford in 1815, John Russell (born in Dartmouth, England, in 1795), acquires a terrier dog named Trump from a milkman. He crossed it with a Devon hunt terrier and created the Jack Russell breed. Later in life he became a parson so the breed is sometimes known as a Parson Russell. A founder member

1814 Missionaries arrive in New Zealand to convert the natives. 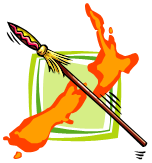 Aprilx1815. The eruption of Tambora volcano on Sumbawa Island Indonesia, the greatest ever recorded, kills some 100,000 people, mainly by famine and disease. Ash fills the skies, and for many

parts of the world 1816 becomes “a year without summer”.