xxxxxFollowing the poor showing of the British in the First Anglo-Maratha War of 1775 (G3a), Lord Mornington, becoming governor general of India in 1797, set out to expand British authority. In December 1802, taking advantage of a dispute between various leaders within the Marathan Confederation, he agreed to support one of the contestants, and this made inevitable the Second Anglo-Maratha War. At first British forces did well. Colonel Arthur Wellesley, the future Duke of Wellington and younger brother of Lord Mornington, won sound victories at the Battles of Assaye and Argaon, and General Lake defeated the enemy at Laswari and captured Delhi, but then another of the Marathan clans entered the battle and, driving back the British, laid siege to Delhi. Once again the war ended in stalemate and Mornington, for his failure in the field and - more to the point - his blatant imperialistic policy, was relieved of his office.

xxxxxDespite their defeat at the hands of the Afghans at the Battle of Panipat in 1761, the Maratha remained a resourceful people. As the Mughal Empire went into decline, they formed a confederacy of five powerful chiefdoms and consolidated their power over much of the Indian sub-continent. As we have seen, when Warren Hastings arrived in Bengal, he tried to reduce the threat from the Marathas by intervening in a power struggle within the confederacy in 1775 (G3a), but the plan misfired. A British force was defeated at Wadgaon, near Poona, and Hastings was obliged to come to terms with the Marathas in May 1782. The East India Company’s only gain in the First Anglo-Maratha War was the small island of Salsette near to Bombay. 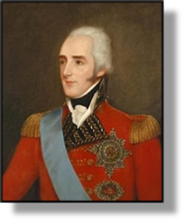 xxxxxThexSecond Anglo-Maratha War broke out in 1803. By that time Lord Mornington (1760-1842) (illustrated) - the older brother of Arthur Wellesley, the future Duke of Wellington - was governor general of India, and he was all in favour of a policy of territorial expansion. Whereas Warren Hastings had sought to develop a series of buffer states simply to protect the company’s possessions, Mornington was prepared to use military force or the imposing of “subsidiary alliances” to expand British authority. In 1802, taking advantage of yet another bitter dispute between the leaders within the Marathan Confederacy, he gave support to one of the contestants, Baji Rao II, and by the Treaty of Bassein in December of that year stationed British troops at Poona, the official Maratha capital. War was inevitable. 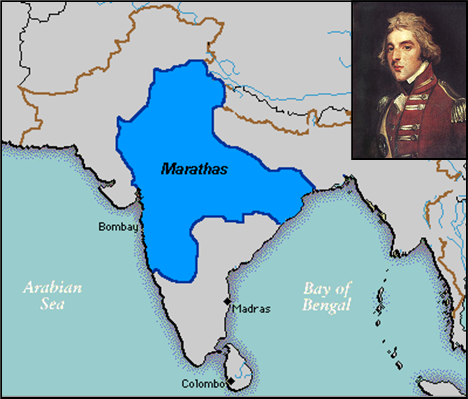 xxxxxAlmost at once two of the leading clans, led by Daulat Rao Sindhia and Raghuji Bhonsle, took up arms against the British, but they fared badly. Mornington’s younger brother Arthur (illustrated), then with the rank of colonel and conducting his first independent command, defeated a combined force at the Battles of Assaye and Argaon in west-central India, whilst General Lake, overpowering Sindhia’s French-trained army at Laswari, occupied Delhi. But these resounding victories did not bring an end to the conflict, far from it. In 1804 the powerful chieftain Holkar entered the battle and, using his cavalry to good advantage, drove the British back and laid siege to Delhi. He was later defeated, but once again the war ended in stalemate. For this setback and, more to the point, his blatant imperialistic policy, Lord Mornington was relieved of his office - much to the delight of the company’s directors - but his failure on the battlefield was more apparent than real. The victories gained by Colonel Wellesley and General Lake had taken their toll on the Maratha, and they were never to recover their strength or their unity. Indeed, had they done so, the history of India may well have been different, if only in the short term.

xxxxxThe Third Anglo-Maratha War - and the last - began in 1817, and was all over by the following year. The end of the Napoleonic Wars in Europe awakened the need to complete the conquest of India, thereby removing the danger of French support for would-be independent regions. The governor-general Lord Hastings (the colonial administrator Francis Rawdon-Hastings), who had taken up his appointment in 1813, reached an agreement with the Gurkhas of Nepal by the Treaty of Sugauli in 1816. He then turned his attention to the widespread disorder being caused by the Pindari, bands of vagrants and former soldiers who, from their hideouts in the hills, raided and plundered towns and villages. In 1817 a campaign was mounted to flush them out, but this involved crossing into Maratha territory. Some of the chieftains there objected but, disunited and poorly led, they proved no match for the British forces and, like the Pindari, all had surrendered by June 1818. Maratha resistance was at an end and their land was taken over. 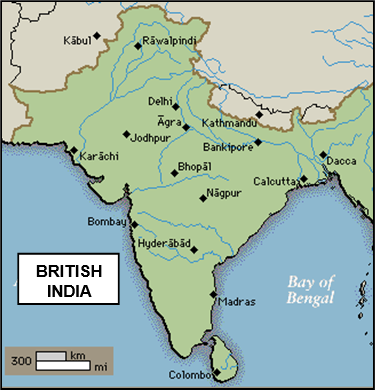 xxxxxGiven the overthrow of the Maratha and, in its wake, the surrender of central India to British rule, the year 1818 marked the opening of a new chapter in the history of India. The East India Company then controlled the vast majority of the Indian sub continent. All that remained outside its jurisdiction was a number of Himalayan states in the north and an area in the north-west incorporating the Punjab and Kashmir. Some of these were to remain independent, as in the case of Nepal and Bhutan, others were to come under British protection, like Sikkim, and a number were to be annexed, as was the Sikh State in 1849. As we shall see, the British were also to be involved in conflict beyond India’s natural borders, such as the First Anglo Burmese War of 1824 (G4) and the Afghan Wars, starting in 1839 (Va). And in the not too distant future, British India itself, as it now could be called, was to become the responsibility of the British crown following the break out of the Indian Mutiny in 1857 (Va) and the demise of the East India Company in the affairs of state.

xxxxxIncidentally, Arthur Wellesley, as we have seen, having cut his teeth in India (notably at the Battle of Assaye in 1803), fought on the continent during the Napoleonic Wars and then, in 1808, was given command of the British Expeditionary Force in Portugal. Having expelled the French armies from Portugal and Spain, he was created Duke of Wellington in 1814 and went on to defeat Napoleon at the famous Battle of Waterloo the following year. As we shall see, he ended his career as the British prime minister. We are told that despite his own accomplishments, Richard Wellesley (Lord Mornington) was always jealous - and became increasingly so - of his younger brother’s rise to fame. …...

xxxxx……  Itxwas in 1814 to 1816, in the period between the Second and Third Anglo-Maratha Wars, that the British East India Company waged war against the Gurkhas of northern India when they attempted to expand southwards. Predominantly a Tibeto-Mongolian people, they had conquered Kathmandu Valley in 1768 and settled in Nepal. Their attempt to take Tibet in the early 1790s failed after they were defeated by the Chinese, but they held on to Nepal until the British took over the country in 1816. Then, by the Treaty of Sugauli, they became a dependent buffer state administered from Kathmandu. It was from this time onwards that young Gurkha men were recruited for service in the Indian and British armies. The kingdom gained its independence in 1923.

xxxxxBut the outcome of the Second Anglo-Maratha War was not quite so disastrous for the British as it at first appeared. Indeed, the victories of Colonel Wellesley and General Lake had seriously weakened the Maratha and added to their disunity. This became evident in the Third Anglo-Maratha War which broke out in 1817. In that year the British, mounting a campaign against attacks by roaming bandits, crossed into Maratha territory and triggered off an armed response. But not all the clans took up arms, and those that did lacked co-ordination and able leadership. By June of 1818 the Maratha had been defeated and their land taken over. This victory, together with the surrender of large parts of central India to British rule, meant that the vast majority of the sub-continent was then under the control of the East India Company. And it was not long before those outside their authority, mostly in the north and north-west, were granted independence, annexed or taken under British protection. Then, as we shall see, the Company was to lose its authority to the Crown following the Indian Mutiny of 1857 (Va).