xxxxxThe Holy Alliance was the brainchild of Tsar Alexander I. Put forward in 1815, it called upon all European sovereigns to settle disputes in accordance with Christian principles. Vague and meaningless in political terms, it was hijacked by the forces of reaction, led by Alexander himself and the Austrian minister Prince Metternich.

xxxxxAs we have seen, the Congress of Vienna, having completed its work, introduced a Congress System by which the Great Powers of Britain, Russia, Austria and Prussia (and later France) were able to meet when needed to ensure that the terms of the settlement were strictly enforced. This early attempt at international co-operation had its merits, improving as it did diplomatic relations between nations, but, conservative by nature, it virtually ignored the demands for social and political reform, demands which were to lead to uprisings in Spain, Naples and Portugal in 1820, the overthrow of the French monarch in 1830, and the Year of Revolutions in 1848. 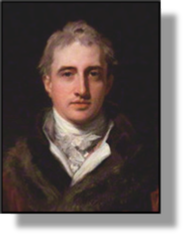 xxxxxNot officially part of this Congress System, but strongly associated with it, was the Holy Alliance, the brainchild of the Tsar of Russia, Alexander I. Put forward in 1815, this “Christian Union of Charity, Peace, and Love” called for an undertaking by all European sovereigns to settle any dispute in accordance with Christian principles, ruling their subjects like good fathers. In the harsh world of international politics, most statesmen gave it short shrift. ThexBritish statesman Lord Castlereagh (1769-1822) (illustrated), for example, described it as “a piece of sublime mysticism and nonsense”, but in the optimistic climate following the peace settlement, nearly all of Europe’s sovereign leaders signed up to the proposal. The only exceptions were the Pope - who could not associate himself with Protestant heretics -, the Sultan (obviously), and the Prince Regent for constitutional reasons (though he did sign as Regent of Hanover). This vague agreement accomplished nothing, and was later hijacked by the forces of reaction, led in particular by the Austrian minister Prince Metternich, who saw the idea as a “loud sounding nothing” that could be exploited to his own advantage.

xxxxxAlexander I (1777-1825), the Tsar who instigated the Holy alliance in 1815, came to the throne in 1801. His armies fared badly against Napoleon, losing the battles of Austerlitz, Eylau and Friedland, but at the Treaty of Tilsit in 1807 he negotiated an agreement by which he and Napoleon shared control of Europe, the French in the west and the Russians in the east. However, when Alexander abandoned the Continental System against Britain, Napoleon invaded Russia in 1812 and, being forced to make a retreat, lost the best part of his Grand Army. Alexander, sensing victory, rallied the Austrians and Prussians to his support, and brought about the allied victory at the Battle of the Nations in 1814. As a consequence, he played a leading part at the Congress of Vienna, and it was after this that he put forward his idea of a Holy Alliance, a Christian agreement between Russia, Austria and Prussia which, in fact, became a tool to stifle social and political reform. Earlier in his reign he had attempted to introduce some liberal measures in government and education, but after Vienna his attitude hardened. He took comfort in religious mysticism, and his despotic rule led to the Decembrist Rebellion on the accession of Nicholas I in 1825 (G4). 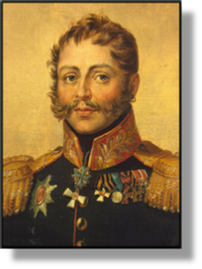 xxxxxAlexander I (1777-1825), the Russian ruler who instigated the Holy Alliance in 1815, became Tsar in 1801. His army was well and truly defeated at the Battle of Austerlitz in 1805, and then again at Eylau and Friedland two years later, but by an astute piece of diplomacy he made an agreement with Napoleon at the Treaty of Tilsit whereby they shared the control of Europe - France in the west and Russia in the east. But this cosy arrangement did not last. Napoleon’s Continental System threatened to ruin the Russian economy, and Alexander’s decision to pull out of this commercial blockade led to Napoleon’s invasion of Russia and his disastrous retreat in the winter of 1812. It was this Russian campaign, together with Alexander’s own determination to “set free the peoples of Europe”, that brought about the final defeat of the French. He roused the Prussians and the Austrians to action and, so it seemed at the time, helped to put an end to Napoleon’s military career at the Battle of the Nations in 1814. In March of that year he entered Paris in triumph, declaring that he had made war on Napoleon, not on the French people. 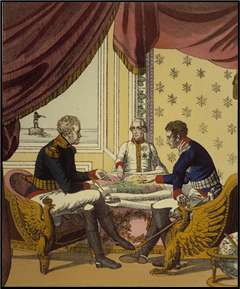 xxxxxNot surprisingly, Alexander played a leading part in the Congress of Vienna, attending in person to savour his triumph and get his own way. He was seen as a liberator but, as one might expect, he supported the return of autocratic monarchies. Furthermore, his Holy Alliance, founded on Christian principles and seemingly full of liberal promise, was simply a reaffirmation that a monarchy, like daddy, knew what was best for his children (i.e. his subjects). Administered by Russia, Austria and Prussia, it eventually served as a means of meddling in the internal affairs of other states. The illustration here shows a meeting between Tsar Alexander (on the left), Emperor Francis (centre) and King Frederick William (on the right).

xxxxxNonetheless, in the first half of his reign he could certainly be regarded as something of an enlightened despot. This period saw the introduction of some promising liberal reforms, including the creation of eight ministries and a Council of State; the beginnings of an extensive state education system; the abolition of torture; and a certain relaxation in the rules governing serfdom, notably in the Baltic provinces. Even later, after the Vienna settlement, he provided a new constitution for his recently acquired territories, the “Congress Kingdom of Poland” and the “Grand Duchy of Finland”. By this time, however, he had become much firmer in his reactionary beliefs. He remained despotic but no longer enlightened.

xxxxxAlexander was an intelligent ruler who genuinely aspired to modernise Russian institutions, but, being indecisive by nature, he was obliged to lean heavily upon the advice of favourites, and this slowed down his reform programme. Frustrated and generally suspicious of others, he became inward looking, finding comfort in religious mysticism and regarding himself alone as the arbiter of his people. As we shall see, his opposition to Western and liberal ideas precipitated the Decembrist Rebellion, which broke out on the accession of his successor, the autocratic Tsar Nicholas I, in December 1825 (G4).

xxxxxIncidentally, Alexander’s sudden death in 1825 is clouded in mystery. It would seem that after a visit to the Crimea he was taken ill with malaria or pneumonia and died on his return to Taganrog, a port on the Azov Sea where he and the Empress were staying. However, after his death, the refusal of members of his entourage to open his coffin gave rise to the legend that he had not died, but had been secreted away to a religious retreat in Siberia.