xxxxxThe Italian composer Gioacchino Rossini produced nearly 40 operas, including his famous comic opera The Barber of Seville, first performed in 1816. In his comic works he created the romantic style, noted for its tuneful melodies and “beautiful singing” (bel canto). Other works in this style were The Silken Ladder, The Touchstone, The Italian Girl in Algiers, and Cinderella. His light, sparkling music also made up many of his overtures, and these have become concert pieces in their own right. He composed a number of successful serious works, such as Othello and Armida, and produced his most ambitious opera William Tell in 1829. After this he abandoned the theatre and wrote mainly for his own pleasure. This included religious works, notably his Stabat Mater of 1842, and a collection of songs and piano pieces. During his career, he met Ludwig von Beethoven and was visited by Richard Wagner. His Lady of the Lake of 1819 was based on the poem by Sir Walter Scott, and in 1824 he composed a lament on the death of Lord Byron. As we shall see, his fellow countrymen Bellini and Donizetti continued the bel canto style, and it was enhanced by the Italian operatic masters Verdi and Puccini well into the 20th century. 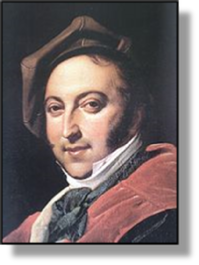 xxxxxThe Barber of Seville, the most famous comic opera of the Italian composer Gioacchino Rossini, was produced in Rome in 1816. Over the next eight years he produced 20 operatic works and, together with his fellow countrymen Vicenzo Bellini and Gaetano Donizetti, created the Romantic style of Italian opera, noted for its tuneful melodies and “beautiful singing” (bel canto). After composing his ambitious, large-scale William Tell in 1829, he gave up his operatic work, for one reason or another, and settled first in Bologna and then in Paris. It was during this long period of virtual retirement that he composed some church music, notably his Stabat Mater of 1842, and a few secular works, including songs and piano pieces.

xxxxxRossini was born into a musical family in Pesaro, northern Italy. His father played the trumpet in the town band, and his mother, a singer, occasionally played secondary roles in local operatic performances. Not surprisingly, this home-based interest in music and the theatre clearly influenced the young Rossini. By the age of ten he was singing and playing the harpsichord in local theatres and churches, and when he was 14 he began his training at the Liceo Musicale in Bologna. His interest lay in comic opera, and his first attempt in this genre, Demetrio e Polibio, was performed in Rome as early as 1806. His first production of any note, however, came in Venice four years later with his one-act comic opera The Bill of Marriage. This was followed by his successful two-act opera The Extravagant Misunderstanding in 1811, and The Silken Ladder and The Touchstone the following year. By the time his Tancred and The Italian Girl in Algiers were produced in 1813, his fame had spread throughout Italy. 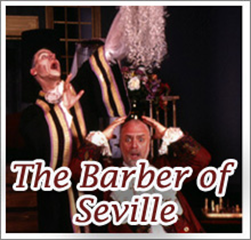 xxxxxOn the strength of this series of successes, in 1815 he was appointed musical director of the San Carlo Opera House in Naples. His first production, Elizabeth, Queen of England, met with public acclaim, and in 1816 he was invited to Rome for the carnival season. It was here that he produced his masterpiece, The Barber of Seville, written in 16 days and based on the play by the French dramatist Pierre Beaumarchais. It was not, in fact, an immediate success, but quickly gained in popularity, and is today regarded as one of the finest comic operas of all time. He then went on to produce a string of successful operatic works. These included Othello (a setting of Shakespeare’s play), Cinderella and The Thieving Magpie in 1817, and The Lady of the Lake (based on the poem by Sir Walter Scott) two years later.

xxxxxHis more serious work, Moses in Egypt, produced in Naples in 1818, was followed by a number of works in similar vein, such as Armida, Ermione, and Zelmira. In 1822 he travelled abroad and was enthusiastically received wherever he went. He visited Vienna, where he met the German composer Ludwig von Beethoven, stayed for a short time in Paris, and then travelled to London. There he met George IV and, on learning of the untimely death in Greece of Lord Byron, he wrote a lament for eight voices on the death of the English romantic poet. 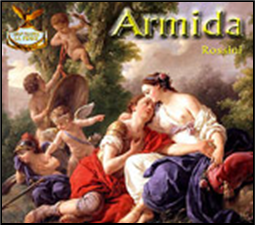 xxxxxNow at the height of his career, Rossini returned to Paris in 1824, and was appointed director of the Théâtre-Italien there. It was then that he produced his sparkling comic opera Count Ory (set in the time of the Crusades) and his most ambitious undertaking, the grand opera William Tell of 1829, a story of Swiss patriotism based on the play of that name by the German dramatist Friedrich von Schiller. It was to have been the first of five operas but, following the revolution of 1830, the new government withdrew the contract. Whether it was this that made him give up his operatic work at this time - he was only 37 - or whether it was a question of laziness, dissatisfaction at the lack of official recognition, or jealousy at the success of younger composers, is not at all clear. Whatever the cause, from then onwards he abandoned the theatre, shared his time between Bologna and Paris, and turned his attention to composing a limited amount of religious and secular music, mostly for his own pleasure. 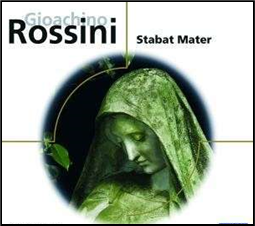 xxxxxTo this period of self-imposed retirement belongs his two major religious works, the Stabat Mater in 1842 (depicting the weeping mother at the cross) and his Short Solemn Mass, written in 1864. His secular work included six string quartets, and piano pieces, choral music and songs grouped under the witty title Sins of Old Age. He often amused himself by writing music to entertain his high society friends, and he frequently gave musical soirées and sumptuous dinner parties. He was noted for his wit and caustic comment on such occasions. Whilst at Bologna he took on the task of reforming his alma mater, the Liceo Musicale, and, having moved to Paris permanently in 1855, he built a villa in the suburb of Passy. He died there in November 1868, and was laid to rest in the Church of Santa Croce in Florence, the burial place, among others, of Michelangelo and Machiavelli.

xxxxxRossini showed a remarkable skill at creating dramatic effect in his serious works, but it is for the bel canto style of his comic operas that he is remembered today. In these, the drama takes second place to his lively, melodious music, full of light, bubbling wit, and designed, in the main, to test the acting as well as the singing ability of his leading parts. He produced these effervescent, good-humoured tunes to order and with remarkable speed. Indeed, he once claimed that he could set a laundry list to music if so required! And the bright, tuneful melodies he thus fashioned were also to be found in his overtures, many of which - as in the case of William Tell - have become more popular than the operas they introduced. 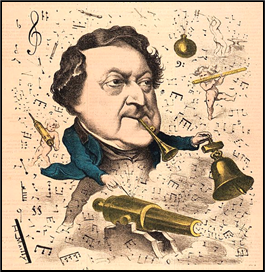 xxxxxIn all, Rossini composed 37 operas - about half in the lighter, comic style - and they made him the most successful composer of his time, and a highly significant figure in the development of 19th century Romantic music. His stage works, featuring characters taken from everyday life, and full of melodious ensembles and individual numbers, made opera both understandable and memorable, and that proved his lasting achievement. As we shall see, his contemporaries Vicenzo Bellini and Gaetano Donizetti continued the bel canto style, and it was enhanced by the great Italian operatic masters, Giuseppe Verdi and Giacomo Puccini well into the 20th century.

xxxxxIncidentally, In his later years Rossini set to music part of Dante’s Divine Comedy. Some of his piano music from this period was later made into a ballet by the Italian composer Ottorino Respighi (1879-1936). Called The Fantastic Toyshop, it was performed in London by Diaghilev’s Ballets Russes in 1919. Six years later another arrangement of his piano pieces provided the music for Respighi’s 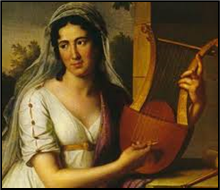 xxxxx…… In 1822 Rossini married his long-term mistress, the Portuguese singer Isabella Colbran (illustrated), who had played leading roles in his early operas, such as Elizabeth and Othello. Following her death in 1845, he married Olympe Pélissier, a woman of doubtful reputation. ……

xxxxx…… The French writer Stendhal wrote a life of Rossini in 1823. It was not accurate in every detail, but it provided quite an interesting study of the man himself. Later, in 1860, Rossini was visited by the German composer Richard Wagner, and their interesting conversation on that occasion was later recorded by Wagner in his essay A Memory of Rossini. ……

xxxxx…… Rossini had a reputation not only as a bon viveur, but also as a humorous critic. We are told that one day a young, aspiring composer came to him with two pieces for his consideration. He played the first one and waited for the verdict. “I prefer the other one”, said Rossini! And when he first heard Berlioz’s revolutionary Symphony Fantastique, he quipped, “Thank God it isn’t music!” 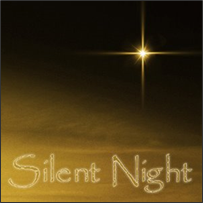 xxxxxItxwas in 1818, the year that Rossini produced his Moses in Egypt, that the first performance was given of the well-known Christmas song Silent Night. Its composer, the Austrian organist Franz Xaver Gruber (1787-1863), put the words to music just a few hours before it was first performed at a midnight mass held at the Church of St. Nicholas in Oberndorf, north of Salzburg, on Christmas Eve. Gruber served thirteen years as the choirmaster and organist at St. Nicholas’, but in 1833 he became director of the choir at Hallein, just south of Salzburg, and he remained there for the last thirty years of his life. The words were by a young Austrian priest named Joseph Mohr (1792-1848). He wrote the poem in 1816, a year before becoming assistant pastor at the Church of St. Nicholas. He served the last ten years of his life in the parish at Wagrain, now a popular Alpine ski resort.