xxxxxFrancisco de Goya’s The Third of May, 1808, produced in 1814, together with his The Second of May, 1808 and his series of etchings The Disasters of War, graphically portrayed the horrors of Napoleon’s occupation of Spain and the savage guerrilla warfare that followed. He saw only cruelty and suffering in war. One of Spain’s greatest painters, his vast output included scenes from everyday life, religious subjects, and a large number of portraits. In these he was clearly influenced by the works of Velasquez and Rembrandt. Notable among his portraits are those of the Duke of Wellington, Dona Isabel de Porcel and his Naked and Clothed Maja. In 1796, following a serious illness, he became totally deaf, and this affected his mental state. He became progressively depressed and pessimistic, and this showed in his work. Some of his paintings became personal visions, full of bizarre figures and nightmarish images - like the “Black Paintings” which decorated his house - and these weird fantasies served to illustrate a savage series of etchings attacking human failings, published under the titles Extravagances and Absurdities. In his final years, lived in Bordeaux, he produced some fine prints in the new technique of lithography. His work had an impact on modern painting - notably French Impressionism - and amongst those he influenced were Delacroix, Manet, Klee, Picasso and Hopper. 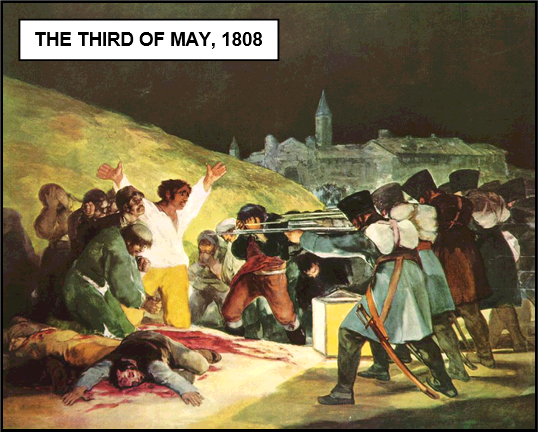 xxxxxGoya’s large canvas The Third of May, 1808, painted for the King of Spain, Ferdinand VII, in 1814, is one of art world’s enduring condemnations of the cruelty and horror of war. It depicts a tragic scene from the massacre of hundreds of citizens which took place when Napoleon overthrew the Spanish rebellion of 1808 and recaptured the city of Madrid. Napoleon’s cavalry commander Joachim Murat was the man tasked with carrying out the reprisals. The painting (illustrated here) brilliantly contrasts the terrified victims - some writhing in despair, some cowering in fear, some standing in defiance - with the faceless, motionless, ruthless executioners, firing from out of the shadows.

xxxxxAnd a second gruesome masterpiece, depicting a scene from the uprising the day before, The Second of May, 1808, is equally as powerful in its condemnation of man’s inhumanity. There can be few battle scenes in the world of art which capture so vividly the savagery of conflict. And, to add to this theme, Goya produced at this time a series of stark etchings entitled Disasters of War, hurried, dramatic compositions which vividly capture some of the horrifying atrocities committed by both sides. Events of this kind must have been seen by Goya himself during the brutal guerrilla warfare which filled the years of French occupation. For him there was no glory in war, just cruelty and suffering. 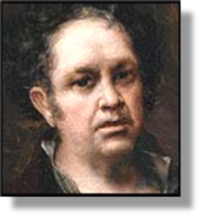 xxxxxThe Spanish painter and engraver Francisco de Goya was one of Spain’s and Europe’s greatest artists. He was born in the village of Fuendetodos, near Saragossa in Aragon, and showed early promise. After being apprenticed to a local artist for four years, he then worked in Madrid for a while before studying for a short time in Italy. He returned to Madrid in 1771 and four years later, due to the influence of his brother-in-law the court painter Francisco Bayeu, obtained a valuable commission, producing 40 designs for the royal tapestry factory of Santa Barbara in Madrid. For these large paintings, mostly after the Rococo style of the Venetian painter Giovanni Battista Tiepolo (then working in Madrid), he chose to depict various aspects of Spanish life instead of the usual mythological scenes. They were well received and kept him occupied until 1792, but in the meantime he produced frescoes for a number of local churches, and his portraits - at that time in conventional 18th century poses - brought him to the notice of the king. In 1786 he was appointed chief painter to Charles III. 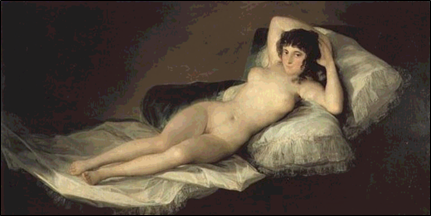 xxxxxBut it was during the reign of the next king, the weak Charles IV, that Goya became the foremost artist in Spain. Under his patronage commissions flooded in, and he was appointed director of the Royal Academy, Madrid, in 1795, and first court painter four years later. It was from this time onwards that he produced a vast and wide variety of paintings, engravings and drawings, many capturing in uncompromising candour the period of political and social turmoil in which he lived. His output included scenes form everyday life, religious subjects, brutal glimpses of war, and satirical etchings on “the follies common to all society”. And by now, his portraits had become real character studies. He no longer went out to flatter. Indeed, a revolutionary at heart, his portraits of the royal family, particularly those of Charles IV, were far from complimentary and may well have been prompted by his disdain for his country’s corrupt and reactionary monarchy. Notable among other portraits was the resplendent Dona Isabel de Porcel, painted in 1805 (illustrated below), his teacher Francisco Bayeu, and the Duke of Wellington. Two highly erotic works, his Naked Maja (here Illustrated) and Clothed Maja, completed around 1805 - thought to be of his lady friend (and probable mistress) the beautiful Duchess of Alba - caused much offence, and brought censure from the Inquisition.

xxxxxBut if the reign of Charles IV brought artistic recognition and social success, it also brought personal tragedy. In 1792 Goya was struck down by a near-fatal illness. The cause remains a mystery - possibly syphilis, possibly lead poisoning. He recovered from partial paralysis and blindness, but he was left totally deaf. This traumatic experience marked a turning point in his life. He became progressively pessimistic, turning his thoughts and imagination to bizarre and ever sinister subjects, and becoming acutely aware of pain and suffering. Thus his non-commissioned works became highly personal visions, developing slowly from troubled dreams and bizarre figures into nightmarish images and gruesome fantasies. Whilst convalescing, for example, he produced a weird series of small oil paintings with subjects full of what he called “fantasy and invention”, the outcome of his “sufferings”. He completed this set with his The Madhouse of 1794, a disturbing, realistic picture of genuine mental torment. In 1822 this highly-charged, morbid imagination culminated in a series of “Black Paintings”, 14 strange, terrifying scenes with which he decorated the walls of his house Quinta del Sordo (House of the Deaf Man) just outside Madrid. Worst amongst these was his revolting Saturn Devouring One of His Sons, produced in 1822 (detail Illustrated below). 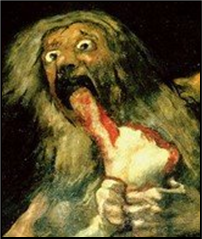 xxxxxNor were these imaginative scenes depicting the dark side of human nature confined to canvas. They found a highly effective medium in Goya’s combination of aquatint and etching. In 1795 he produced his Los caprichos (Extravagances), 80 caricature studies attacking the shortcomings of Church and State but veiled in flights of disturbing fantasy Then, as noted, came his Disasters of War, and this was followed in the 1820s by his Los disparates (Absurdities), a bizarre, pessimistic collection of prints, mocking various aspects of human folly within a nightmarish world of grotesque monsters. In these fantastic imaginings Goya may well have been influenced by the weird and colourful paintings of the Flemish artist Hieronymus Bosch. During his reign, Philip II had collected a large number of his works, and they were on display in the royal collection. These may well have triggered off Goya’s own morbid fantasies. 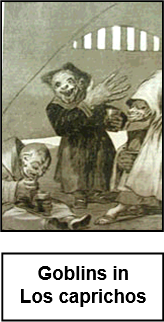 xxxxxWith the Napoleonic invasion of Spain in 1808, and the expulsion of Charles IV and his son Ferdinand, Goya’s position became difficult. He chose to work for the imposed French monarch, Joseph Bonaparte, and whilst Ferdinand VII did not hold this against him when he returned in 1814, his life at court was uneasy from then on. Furthermore, his state of mind was disturbed further by the cruel, oppressive rule imposed by the government. The French Revolution had changed nothing. Disappointed and embittered, in 1824 he chose to leave Spain and live in voluntary exile in Bordeaux. Here, apart from continuing to paint and draw, he took up the new art of lithography, becoming the first master of this technique. Having earlier compiled a series of etchings on bullfighting (La tauromaquia in 1816) he produced The Bulls of Bordeaux in this new art form. He died three years later, and in 1900 his remains were returned to Spain and interred in the cemetery of San Isidro in Madrid.

xxxxxFrancesco de Goya, together with El Greco and Diego Velasquez, make up the three great Spanish masters. He derived much of his art, as he said himself, from Velasquez and Rembrandt. The portraiture of his mature years followed their penetrating study of character, and in his brushwork, like them, he avoided a detailed finish. “There is no reason”, he once said, “why my brush should see more than I do”. And he owed his juxtaposition of light and shade to the skill of his acknowledged teachers. In his turn, Goya influenced artists of both the 19th and 20th century in movements from Romanticism to Surrealism. The romantic painter Eugène Delacroix, for example, greatly admired his work, and the style in which, for example, his Mad House and his Bullfight were painted clearly anticipated and influenced certain Impressionists, particularly Edouard Manet. And his impact on modern art, as a printmaker as well as a painter, can be seen in the works of the Swiss artist Paul Klee, his fellow countryman, Pablo Picasso, and the American painter Edward Hopper. 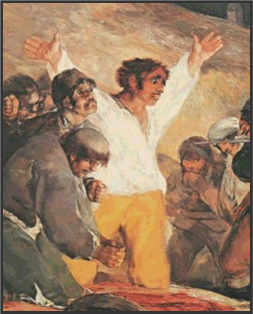 xxxxxIncidentally, when Goya was an apprentice, working in Saragossa, one of the jobs assigned to him was adding drapery to nude figures in religious pictures. For this he was given the grand title “Reviser of Indecent Paintings”! Many years later, when he was made one of the painters to Charles IV, he marked the occasion by adding the aristocratic “de” to his name. ……

xxxxx…… In his famous painting The Third of May, 1808, Goya uses a great deal of artistic licence to heighten the dramatic effect. The central figure who stares in defiance, his arms outstretched, is in fact shown as kneeling. If he were to stand he would dwarf all around him, including the firing squad! …… 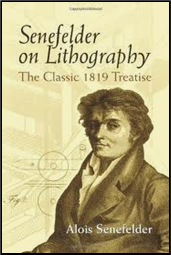 xxxxx…… Itxwas the German engraver and playwright Alois Senefelder (1771-1834) who, wishing to print out his own plays, invented by chance the printing technique known as lithography. He had little success using copper plates, but in 1796 he happened to write out a laundry list on a piece of limestone, using a piece of greasy chalk. He discovered that when the stone was dampened an inked roller would only leave ink on the chalk. This formed the basis of the new technique, and in 1819 he described this new method of surface printing in his A Complete Course of Lithography.