xxxxxAs we have seen, the Serbs were defeated by the Ottoman Turks at the Battle of Kosovo in 1389 (R2), and in 1459 Serbia was absorbed into the Ottoman Empire. In 1804, however, the guerrilla fighter Karageorge led a rebellion against Turkish rule. By 1808 he had seized power and was regarded as the “supreme Serbian hereditary leader”. In 1812, however, faced with a French invasion, Russia made peace with the Turks and this gave the Sultan the opportunity to strike back. His armies invaded Serbia and crushed the revolt. Karageorge escaped, but on returning to Serbia in 1817 was murdered by a new national leader Milos Obrenovich. He went on to gain control of the country, and in 1867 his son Michael negotiated the withdrawal of all Turkish troops. Full independence came after supporting the Russians in the Russo-Turkish War of 1877, but the country then fell under Austrian domination. 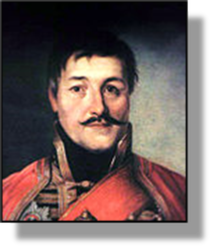 xxxxxAs we have seen, the Serbs were defeated by the Ottoman Turks at the Battle of Kosovo in 1389 (R2). Resistance continued for some years, but in 1459, six years after the Turks captured Constantinople, Serbia was absorbed into the Ottoman Empire. As a result, any further show of open defiance against their masters did not emerge until 1804. It was then that George Petrovic (1762-1817) - known as Karageorge (Black George) because of his dark complexion and sinister appearance - organised a resistance movement and waged a nine-year revolt against Serbia’s Turkish masters. 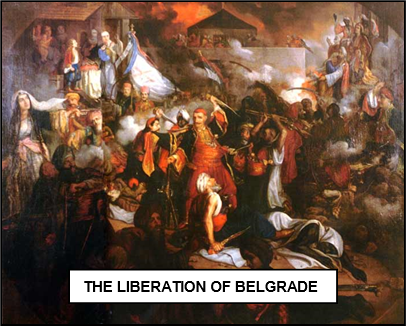 xxxxxKarageorge was a cold, calculating man, who showed no mercy to those who defied him, even be they relatives or friends. He waged a relentless guerrilla war against the Turks, conducting his campaign across the whole of the province, and slaughtering all those he captured regardless of age or sex. At first, in attacking the Janissaries, he had the tacit agreement of the Sultan - who feared their growing influence - but once this elite corps of the Turkish army had been sufficiently weakened, Sultan Selim strongly opposed this violent independence movement. Nevertheless, assisted by the almost constant war waged by the Russians against their Turkish neighbours, Karageorge came out in the open and, attacking Belgrade, captured the city in December 1806. He took over complete control of the country - spurning any idea of a governing assembly - and in 1808 was proclaimed the “first and supreme Serbian hereditary leader”. But his days in power were numbered. In 1812, as Napoleon prepared for his advance on Moscow, the Russians made a hasty peace agreement with the Turks at Bucharest. Serbia lost her powerful ally, and the Sultan found himself with troops to spare. In 1813 the Turks attacked Serbia on three fronts and all opposition was swiftly crushed.

xxxxxKarageorgexmanaged to escape, fled to Austria and then took refuge in Russia. It was while there that another national leader emerged, Milos Obrenovich (1780-1860) (illustrated). In 1815 he led a second rebellion, and within a few months much of the country had thrown off Turkish domination. Obrenovich was recognised as the hereditary leader in 1817, and Serbia acquired a limited degree of self-government. In that year, hoping to stir up his own uprising, Karageorge returned secretly to Serbia, but Obrenovich, having learnt of his whereabouts and regarding him as a dangerous rival (as he undoubtedly was!), had him murdered in his sleep. This led to a bitter feud between the two families which bedevilled Serbian politics for more than a century.

xxxxxNevertheless, following the Russo-Turkish War of 1828-29, the Turks reduced the size of their garrison, and Serbia became an autonomous principality, governed by Prince Milos. Then in 1867 Michael Obrenovich, son of Milos, negotiated a total withdrawal of Turkish troops from Serbia. Finally, ten years later, having supported the Russians in the Russo-Turkish War of 1877, Serbia gained its full independence. This was recognised at the Congress of Berlin the following year, but in some ways it was a hollow victory. Having thrown off Turkish rule, Serbia now found itself dominated by the Austrian Empire.

xxxxxIncidentally, in order to win favour with the Turks, after Milos Obrenovich had organised the murder of Karageorge, he had his victim’s head sent to Constantinople by way of a present to the Sultan!