xxxxxAs we have seen, Napoleon’s disastrous retreat from Moscow in 1812 left his Grand Army in ruins. Sensing his final downfall, there were anti-French demonstrations all over Europe, and Britain, Prussia, Russia, Austria and Sweden formed a formidable alliance. Napoleon assembled an army together - mainly conscripts, - and, remarkably enough, managed to win the battles of Lutzen, Bautzen and Dresden against the Prussians and Russians, but in October 1813 he was forced on the defensive near the town of Leipzig. In the battle that followed, the French were heavily outnumbered and attacked on three fronts. Napoleon was forced to retreat westward over the River Elster, and his army suffered heavy loses. Having crushed French rule east of the Rhine, the allies then advanced towards France and, as we shall see, entered Paris in March 1814. Napoleon abdicated and was banned to the island of Elba off the north-west coast of Italy. It looked as if the Napoleonic Wars were over at last.

THE BATTLE OF LEIPZIG (BATTLE OF THE NATIONS) October 1813 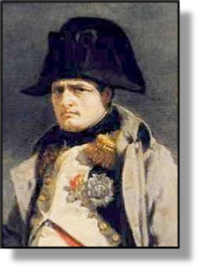 xxxxxAs we have seen, Napoleon’s disastrous retreat from Moscow in 1812 knocked the stuffing out of his Grand Army. Of those men who managed to survive the catastrophe, barely 10,000 were fighting fit. His enemies, past and present, gathered for the kill. Britain, Prussia, Russia, Austria, and Sweden formed an alliance, and all over Europe there were demonstrations against French rule. Nationalism, the driving force of the French Revolution, was on the march in Napoleon’s European empire, whilst in the south his armies in Spain were in full retreat. And even in France itself, where a disillusioned former general, Claude Francois Malet had come close to seizing power, there was widespread unrest. The Emperor hurried to Paris in the December, reasserted his authority, and raised sufficient funds for a new, conscript army. And despite the odds stacked against him, he then moulded these young, raw recruits into something of a fighting force, and won three major battles in Saxony against the Prussians and Russians, the first at Lutzen at the beginning of May, the second at Bautzen later that month, and the third at Dresden in the August. 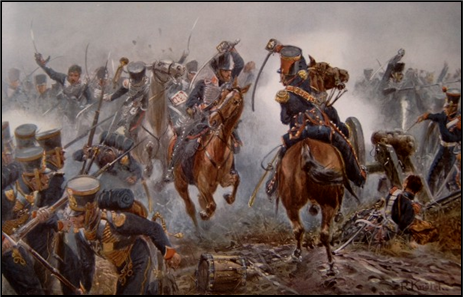 xxxxxGiven the circumstances, these were remarkable victories but, in fact, they were delaying the inevitable. In September he was faced with a General Coalition, and the following month, October 1813, he had to meet a combined Russian, Prussian and Austrian force just outside the town of Leipzig. Napoleon’s army numbered about 185,000. It was mostly made up of young, French conscripts, but it also contained a contingent from Saxony. Opposing it was a Prussian force of 60,000 under Marshal Gebhard von Blücher, and a combined Austro-Russian army, some 160,000 strong, led by Prince Schwarzenburg. In addition, close on 150,000 Swedes, under Napoleon’s one-time general, Prince Bernadotte, were on their way to join them.

xxxxxBefore the fighting began Napoleon had established a good defensive position along the River Elbe, but with the enemy advancing on three fronts he was obliged to pull back to the town of Leipzig. Opening attacks by Schwarzenburg and Blücher were repulsed, but on the following day, with all the allied armies in position, Napoleon’s Saxon contingent defected, and this spelled disaster. The coalition forces made a frontal assault against Napoleon’s weakened front, and he was forced to retreat westward over the Elster River. In the bloody, confused fighting that followed, the only bridge across the river was blown up too early by the retreating army, and some 30,000 men were left stranded and taken prisoner. The French lost more than half its army, with over 90,000 killed, wounded or captured.

xxxxxThe Battle of Leipzig, sometimes known as the Battle of the Nations, put an end to French rule east of the Rhine, but the empire was also falling apart in the west. As we shall see, at the end of March 1814 the allied armies reached Paris. Napoleon was forced to abdicate and was banned to the island of Elba off the north-west coast of Italy. It seemed that, at last, the Napoleonic Wars were at an end. 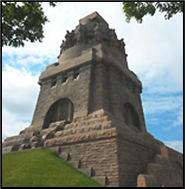 xxxxxIncidentally, the colossal monument to the Battle of the Nations, illustrated here, is over 300ft in height. Situated in a park in Leipzig, it took fifteen years to build and was completed in 1913 to mark the 100th anniversary of the battle. Kaiser Wilhelm II of Germany attended the opening ceremony, together with representatives from Austria, Russia and Sweden.