xxxxxAs we have seen, the Treaty of Tilsit of 1807 marked the height of Napoleon’s power. His aim now was to bring down Britain by an economic blockade. When Portugal refused to enforce this blockade, he invaded and occupied the country at the end of 1807. The following year he put his brother, Joseph, on the Spanish throne and this led to an uprising throughout Spain, joined by the Portuguese. Seizing this opportunity, in August 1808 the British sent an expeditionary force to Portugal, led by Sir Arthur Wellesley (the future Duke of Wellington). At first it met with success, but in January 1809, following the Battle of Corunna, the British army was forced off the peninsula for four months. On its return, however, in May, it drove the French out of Portugal and then, by the Battle of Vitoria in June 1813, expelled them from Spain. The British then crossed into France and occupied Toulouse, bringing the Peninsular War to an end. This conflict, involving some 200,000 French troops, was a serious drain on Napoleon’s money, men and material, and contributed in large measure to his eventual defeat. Apart from Corunna and Vitoria, the major battles were fought at Talavera (1809) and Salamanca (1812).

xxxxxAs we have seen, the Treaty of Tilsit in 1807 marked the height of Napoleon’s power and prestige. By one means or another he virtually controlled the whole of Europe from the English Channel to the frontier with his “ally” Russia. Only one major country remained to be subdued, the island state of Great Britain, and he planned to bring that nation down by his Continental System. This was a blockade of British goods in every port on continental Europe, an economic stranglehold which, strictly enforced, was designed to bring about Britain’s collapse and force it to come to terms.

xxxxxBut the Continental System was a two-edged sword, and the British were not faced with the sharper edge. Whilst this blockade was a serious blow to Britain, its powerful navy was in a position to retaliate, and markets could be expanded within its colonial territories. On the continent, however, these trade restrictions began to spell out economic depression and social hardship to many countries within Napoleon’s own “empire”. The first to break cover and open its ports to British ships were the Portuguese, a people dependent upon trade. When Napoleon’s order to close their ports and declare war on Britain was ignored, an invasion of the country was put in hand. A secret agreement was made with the Spanish to partition Portugal between them - the Treaty of Fontainebleau of 1807 - and this proved the first step towards the Peninsular War. 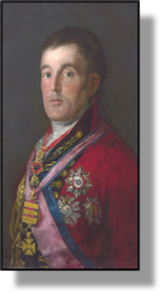 xxxxxIn October 1807, 30,000 French troops crossed into Spain and, with Spanish support, quickly overran Portugal. Lisbon was occupied in November, and the Portuguese royal family fled to Brazil, escorted by British warships. To ensure that access to this new acquisition was secure, however, the French took over Spanish cities en route. Then in May the following year Napoleon intervened in a power struggle between the Spanish king, Charles IV and his son Ferdinand, and, deposing both, put his brother Joseph Bonaparte on the vacant throne. It proved a step too far. The Spanish people rose up in revolt, and were quickly joined by the Portuguese, determined to regain their independence, so recently lost. The Peninsular War (referring to the area of south-west Europe comprising Spain, Portugal and the British stronghold of Gibraltar) had begun.

xxxxxThis outburst of national rebellion was an opportunity the British could not miss. At the beginning of August 1808 an expeditionary force under the command of Sir Arthur Wellesley (Viscount Wellington as from 1809) (illustrated above), landed in Mondego Bay, Portugal with a force of 13,500 men. Having defeated the French at the Battle of Vimeiro, 30 miles north-west of Lisbon, it then forced them to withdraw from Portugal by the Convention of Sintra. In the same month, however, the Spaniards seized control of Madrid and expelled Joseph Bonaparte. Such was the seriousness of the situation that Napoleon himself hastened to the peninsula. He occupied and subdued Madrid by mass killings and, regaining Saragossa after a two-month siege, took on the British and brought most of Spain under his control. When he left in January 1809, the rebellion was still smouldering, but the British army, having ventured deep into Spain under its new commander, Sir John Moore, was in full retreat. It was pursued northwards and forced to escape by sea after the Battle of Corunna. It arrived home in a pitiful condition but, reformed and re-equipped, was back in Portugal by May. By this time Wellesley had resumed command, and the national uprisings in Portugal and Spain had regained their momentum. 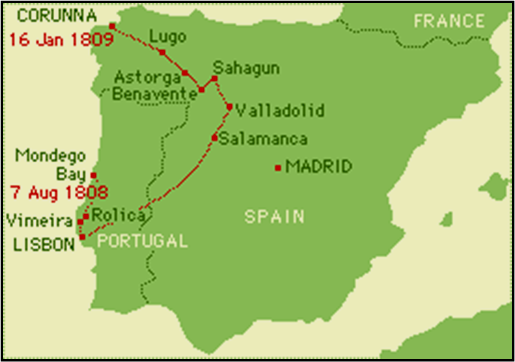 xxxxxFor the Spanish, lacking an efficient regular army, the struggle then developed into an effective campaign of guerrilla warfare, a series of hit-and-run attacks carried out by armed bands against French strongholds, convoys and lines of communication. For the British, aided at times by the Portuguese, the next four years saw a series of engagements with the French, many inconclusive. On its return to Portugal the British army made several incursions into Spain but early attempts to secure Madrid ended in failure. Whenxthe French launched a second attack upon Portugal, for example, in May 1809, Wellesley defeated them at Oporto and pushed them back into Spain, but his advance on Madrid failed. Inxthe July he managed to win the Battle of Talavera 70 miles south-west of the capital, but his army was weakened in the encounter, and he decided to return to Portugal. Here he constructed his “lines of Torres Vedras”, an impressive array of defensive works to defend Lisbon from further attack. This it successfully did when the French invaded Portugal for a third time in August 1810. Unable to break through these defences, and lacking food because of Wellington’s scorched earth policy, they were forced to evacuate Portugal in the spring of 1811. Thexnext major encounter did not occur until July 1812 when, having gathered together a larger army and taken Bajajoz and Cuidad Rodrigo, Wellington (as he then was) took on the French at the Battle of Salamanca and won a resounding victory, defeating “40,000 Frenchmen in 40 minutes”. This forced the French to evacuate southern Spain, but again, having reached Madrid, he felt it advisable to return to Portugal. 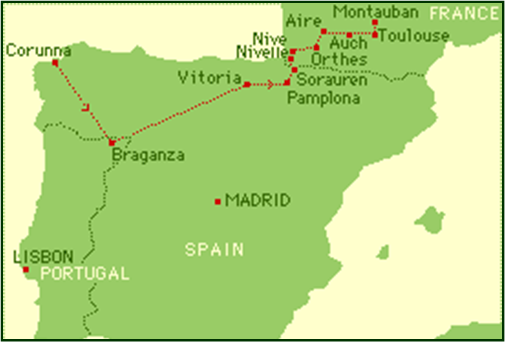 xxxxxWellington’sxfinal campaign began in 1813. In May of that year, with an army much enlarged by Spanish and Portuguese irregulars, he marched across the peninsula. He reached Vitoria in northern Spain in late June and here he met up with a French force commanded by King Joseph Bonaparte himself. Although he was outgunned, Wellington had superiority in numbers (some 75,000 to 57,000), and he used this fact to advantage. Advancing against the French in four columns he pushed back their centre line and left flank and then, after heavy fighting, put the right flank to flight. By early evening the French were in full retreat, leaving behind all their artillery and baggage. The Battle of Vitoria (June 1813) proved decisive. The French escaped into the Pyrenees and returned to France and, once the weather had improved, Wellington followed them, fighting his way across the mountain frontier, and taking Toulouse by storm in April 1814. The Peninsular War was over, just four days after Napoleon, defeated at Leipzig, had abdicated and surrendered to the Allies. The following month Ferdinand VII returned to Spain and claimed his throne.

xxxxxCompared with the major battles being fought in central Europe, the Peninsular War was a modest affair in some respects, but it nonetheless played an important part in the downfall of Napoleon. Its constant need for money, men and material was a weeping drain on French resources - Napoleon called it his “Spanish ulcer” - and it “tied up” some 200,000 men. Indeed, he was so desperately short of troops in 1812, that he withdrew 30,000 troops from the Spanish campaign to bolster the strength of his Grand Army, then about to invade Russia. As for the British, the campaigns in Portugal and Spain singled out Wellington as an outstanding commander, and greatly furthered his career as a soldier and, later, as a politician. The map below shows the major battles during the peninsular campaign.

xxxxxIncidentally, the term “guerrilla warfare” originated in the Peninsular War. These tactics had been used from the earliest times of combat and were one time known as “Fabian tactics” because they were used extensively by the Roman commander Quintus Fabius Maximus Cunctator when opposing Hannibal during his invasion of Italy in the Second Punic War (218-291 BC). The more modern term comes from the Spanish word guerrilla meaning “little war”. ……

xxxxx…… The portrait of Wellington above is by the Spanish artist Francisco de Goya. We are told that later, when Wellington was showered with military honours, he insisted that Goya paint his new decorations onto his uniform! As we shall see, Goya’s The Shootings of May 3rd 1808, painted in 1814 and depicting a scene from the Madrid uprising, has become an enduring portrayal of the horror and cruelty of war. …… 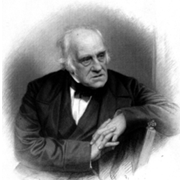 xxxxx…… ThexPeninsular War produced the first war correspondent. In 1808 The Times of London sent the English diarist Henry Crabb Robinson (1775-1867) out to Spain to report on events. A Norfolk barrister and a leading light in the anti-slavery movement, his diaries and letters provide a valuable source of information on the literary scene of his day. He numbered among his friends Blake, Lamb, Coleridge, Southey, and Wordsworth, and while in Germany he met the poets and dramatists Goethe and Schiller, and the philosopher Herder. A popular figure and a noted conversationalist, his regular breakfast parties of a Sunday morning attracted leading literary and political personalities. ……

xxxxx…… Inx1828 the British general Sir William Napier (1785-1860) produced the first of six volumes on his History of the War in the Peninsula. Completed in 1840 and based partly on his own experiences in the conflict, it was written in an attractive, lively style, but was not without inaccuracies and some bias. (A more authoritative account was later produced by the military historian Sir Charles Oman (1860-1946) - History of the Peninsular War - in the early part of the 20th century.) Later, in 1845, Napier also wrote a History of the Conquest of Scinde, based largely on the account of the conquest of this region by his elder brother General Charles Napier two years earlier …… 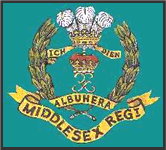 xxxxx…… Itxwas at the Battle of Albuera in May 1811, one of the bloodiest encounters of the Peninsular War, that the 57th Foot (Middlesex Regiment), involved in fierce hand-to-hand combat, earned their nickname the “Die-Hards”. Of their 575 men 423 were killed or wounded. 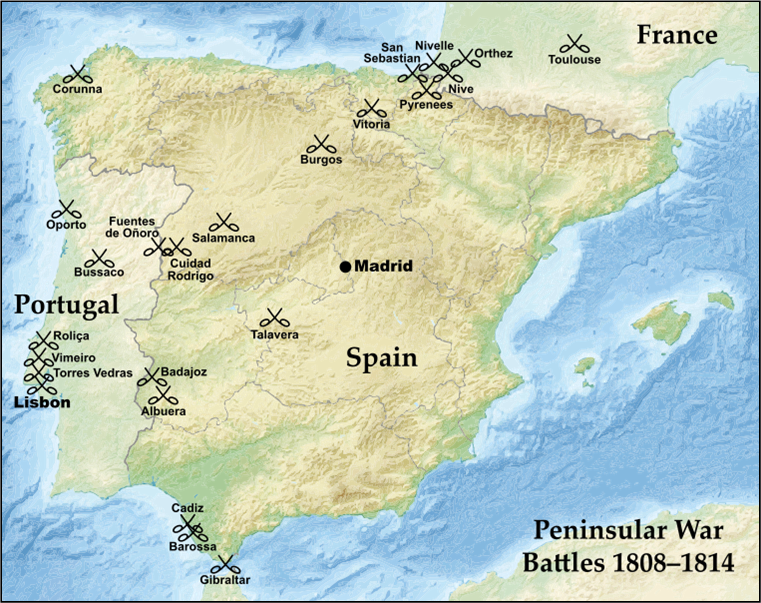