xxxxxThe Genoan virtuoso Niccolò Paganini, one of the world’s greatest violin players, began a tour of Italy in 1813. This proved so successful that in 1828 he made a concert tour of Europe, visiting over 40 cities, including Vienna, Paris and London. His technical skill was so astonishing that some believed he was in league with the Devil. As a composer he produced a variety of works, including concertos, sonatas and quartets for violin, viola, cello and guitar. His capriccios in particular - short, lively pieces - were composed to demonstrate his incredible mastery of the violin, reinforced by numerous showman-like “tricks” with this instrument. He had a profound influence upon the two pianists, Franz Liszt and Robert Schumann, and he later inspired the composers Johannes Brahms and Sergei Rachmaninoff. He also admired and befriended the young composer Hector Berlioz. His performances made him a wealthy man, but he was fond of the good life, and he lost a great deal of money through gambling. 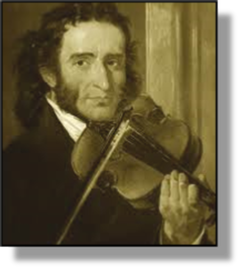 xxxxxThe Italian violinist and composer Niccolò Paganini was born in Genoa and, after receiving instruction from his father and local musicians, he made his first appearance as a violin soloist at the age of nine. However, apart from a successful tour of Lombardy four years later, accompanied by his father, he remained in his home town until 1805, when he became musical director at the court of Napoleon’s sister, Elisa Bacciocchi, Princess of Lucca. There, as in Genoa, he indulged himself in the social pleasures, being particularly fond of gambling and the ladies, and not necessarily in that order.

xxxxxHis career as a violin virtuoso began in 1813, when he left Lucca and went on a tour of Italy, giving recitals of his own compositions in many towns throughout the country. Such was the interest and acclaim he aroused that in 1828 he embarked on a tour of Europe. Over the next five years he made sensational appearances in some 40 towns in Germany, Bohemia and Poland, as well as the cities of Vienna, Paris and London. By the time he had concluded his travels with a triumphant tour of England and Scotland in 1832, he was not only well known throughout the continent, but also very wealthy. The following year he settled in Paris, and it was here that he met the young French composer Hector Berlioz and commissioned him to write his symphony Harold en Italie. After the failure of his Casino Paganini, a gambling house in which he had invested much money, he went to Marseille in 1839, and then to Nice. It was here on a May evening that, suffering from a fever, he collapsed and died while playing his violin. 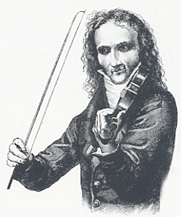 xxxxxHis sensational success - and it was nothing short of that - was not due to the quality of his music, though this was not without merit, but to the quality of his playing. He was capable of rendering slow passages with extraordinary tenderness and beauty, but what really astonished, enthralled and, indeed, exhilarated his audiences were the speed and dexterity he displayed in playing music which many considered to be unplayable. His capriccios and his sets of variations, in particular, demanded a wide use of harmonics, pizzicato with both hands, and fingerings and bowings which almost defied execution. And to this technical skill he added a touch of the showman. For example, he would perform complicated pieces using only one string; play chords of three notes, or reproduce a variety of animal sounds from an imaginary farmyard! For the first time, people attended a performance not simply to listen to music, but also to watch the extraordinary skill of the soloist himself, tricks and all. The personality cult had come to the concert hall and salon. 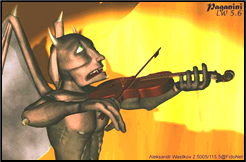 xxxxxIndeed, the story goes that while performing in Vienna, one member of the audience was so overcome by his frenzied playing that he vowed that he had seen the devil at his elbow. It was perhaps from this incident that the rumour grew that Paganini was in league with some form of supernatural power or, indeed, had a pact with the devil himself - a suggestion which the violinist’s dishevelled appearance and tempestuous love life did nothing to dispel. Later it was whispered that he had once been imprisoned for murder, and because of this unlikely story his burial in consecrated ground was delayed for a number of years. To explain away his abnormal ability, it has been suggested that he was “suffering” from Ehlers-Danlos, a complaint which permits excessive flexibility of the joints. This has never been confirmed, but it would certainly explain how he was able to twist his wrist in all directions, and reach notes normally out of reach from the one position.

xxxxxFor his music he drew upon folk and gypsy themes, often purposefully constructed so as to demonstrate his outstanding virtuosity, not only on the violin, but also on the viola, mandolin and guitar. Included among his compositions were six violin concertos (the first being especially popular), twelve sonatas for violin and guitar, variations for violin and orchestra, quartets for violin, viola, cello and guitar, and twenty-four capriccios for solo violin - short lively pieces which have proved some of the most difficult music ever composed for this instrument.

xxxxxPaganini revolutionised the technique of playing the violin, and is considered by some as the greatest violinist of all time. Furthermore, by his very extraordinary talent and intriguing personality, he inspired the Romantic image of the virtuoso genius. He was, perhaps, the first “pop star”. His playing influenced, above all, the Hungarian composer Franz Liszt, whom he met in Paris in 1831, and the German composer Robert Schumann, who also attended one of his performances. Both were inspired to work harder at their piano playing! He also encouraged and financially helped the young French composer Hector Berlioz, and, later, themes from his capriccios inspired works by Johannes Brahms and Sergei Rachmaninoff.

xxxxxIncidentally, during one of his gambling sessions Paganini was forced to pawn his violin to pay an outstanding debt. A wealthy French merchant loaned him a Guarneri violin and, on hearing him play it, was so impressed that he made it a gift. Paganini treasured that violin and later, when he bought a Stradivarius, he bequeathed it to the city of Genoa, where it remains to this day. Likewise, we are told that the Italian composer Gioacchino Rossini was moved to tears when he heard Paganini play. ……

xxxxx…… Rightly or wrongly, Paganini earned a reputation for being mean. However, after the premier of Harold en Italie, a work composed by the young Hector Berlioz for the violin virtuoso, it is reported that Paganini knelt at his feet in homage to “Beethoven’s successor”. The next day the struggling young Berlioz received a letter from Paganini repeating his prediction and enclosing 20,000 francs. Berlioz was able to take time off to compose his choral symphony Romeo and Juliette, and he then dedicated this work to his generous patron. ……