xxxxxThe Zulu leader Shaka, having united the Zulu clans and built a powerful army, took command of his people in 1817. From the Zulu homeland in present-day Natal he started on a vicious campaign of expansion. He defeated his two major rivals, the Qwabe and Ndwandwe, and then advanced south. His terror tactics caused a vast migration of peoples. Known as the Mfecane, this movement brought war and destruction across the whole of south-east Africa. Some two million were killed or made homeless as tribes tried to find new homelands in the region. Shaka’s cruelty at home eventually stirred up opposition, and he was murdered by two of his half-brothers in 1828. The Zulus remained the major force in the area, but, as we shall see, their army was defeated by the Boers at the Battle of Blood River in 1838 (Va) and, some years later, their empire was virtually overthrown following the British victory at the Battle of Ulundi in 1879. 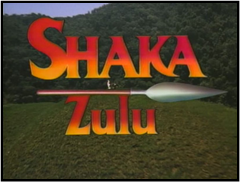 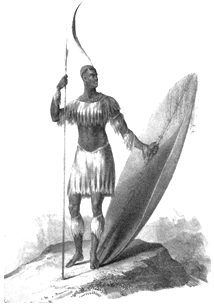 xxxxxKing Shaka, the charismatic but brutal chief of the Zulus (sometimes Chaka or Tshaka), rose to power as a military commander in the army of Dingiswayo, paramount chief of the Mtetwa. In 1816, after six years of distinguished service, he was sent to subjugate the Zulu, a group of clans of the Nguni people centred around the White Umfolozi River (in today’s province of Natal). A Zulu by birth, he carried out his task with ruthless efficiency. Then, having totally subdued his people by a reign of terror, he set about reorganising the Zulu army. He rearmed it with an improved assegai - a short, stabbing weapon which replaced the spear and was designed for close quarter fighting -, established a command structure by introducing a system of ranks, and divided the regiments into four battle groups, one to make a frontal attack, two (the “horns”) to encircle the enemy, and one to be held in reserve. And to ensure that these standard tactics were carried out, officers were appointed to conduct operations by means of pre-determined hand signals.

xxxxxWith this highly efficient fighting machine, the like of which had never been seen amongst the tribal kingdoms of southern Africa, he quickly subdued all the local clans and increased his army fourfold. Thus in 1817, when his overlord Dingiswayo was killed at the hands of a rival clan, the Ndwandwe, he was free to take over command of his people and extend their territory further. He first attacked and defeated the Qwabe, a sizeable threat to his dominance, and then turned his attention on the more powerful Ndwandwe under their leader Zwide. Employing his new tactics, he defeated them at Gqokli Hill in 1818, and then routed them at the Mhlatuza River the following year. They, like many of his opponents, were forced to flee from the region. Now the undisputed power in south-east Africa, he quickly extended his empire southwards by a series of bloody wars, laying waste the land, and driving its terrified inhabitants southwards towards the Cape Colony. 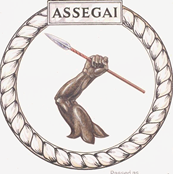 xxxxxSuch was the ruthlessness and cruelty shown by this warrior king during his campaigns of conquests that, as we have seen, he set off a huge wave of tribal migrations - a vast movement of peoples and a long period of bitter tribal warfare which came to be known as the Mfecane (Zulu for “crushing”). And even his own people were not spared his acts of frenzied barbarity, often triggered off by increasing bouts of insanity. Opposition to his rule mounted and eventually in 1828 he was murdered at his military capital, Dukuza, by two of his half-brothers Dingaan and Mhlangana. Nevertheless, as founder of the Zulu state, he become and has remained a national hero in the eyes of his people. Indeed, he is sometimes referred to as the “black Napoleon”. 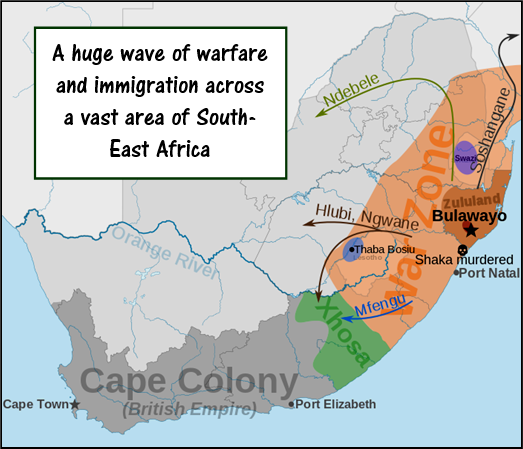 xxxxxThe Mfecane, or Difaqane as it is called by some, caused havoc and carnage over the next ten years or so, and brought about far-reaching changes in the balance of power across the whole of the south-east region of Africa. Three Zulu clans of the Nguni, rather than be forced into a unified state commanded by the despotic Shaka, fought their way westwards and northwards in search of new homelands, overthrowing the large number of petty kingdoms which stood in their path and leaving a trail of destruction. It is estimated that some two million were left dead or homeless in its wake! Eventually, the Ndebele settled in Matabeleland, an area south of the Zambezi River (in part of what is now Zimbabwe), the Kololo seized control of the kingdom of Lozi (on the upper reaches of the Zambezi), and the largest of the three groups, the Ndwandwe, battled its way through Mozambique and came to rest in today’s Zambia. From this people, however, there was still further migration following a spate of internal disputes in 1830s. Three groups moved into separate areas of Malawi; two set up homelands in parts of Tanzania, and one gained control of southern Mozambique and established the powerful Gaza Empire. This wholesale dispersion of tribal people was invariably accompanied by the ruthless destruction of small, independent chiefdoms and the devastation of the land on which they farmed. This not only eased the path of the Boers as they trekked northwards at this time, but also made conquest of the area that much easier when the British arrived in force later in the century. 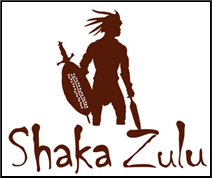 xxxxxAs for the Zulus, their unified nation and formidable army - Shaka’s legacy - proved a tough challenge to the Boers and later the British. Following the death of Shaka, Dingaan, his half brother (and murderer), became king and, after agreeing to cede most of Natal to the Boers - then on their Great

Trek - reneged on the agreement and slaughtered 600 Boers, including their leader Piet Retief. As we shall see, this led to war and his own defeat at the Battle of Blood River in 1838 (Va). Then later, during the reign of King Cetewayo, the British invaded Zululand. After an initial setback they defeated the Zulus at the Battle of Ulundi in 1879, and this virtually put an end to the kingdom. Today, only a third or so of their population live in KwaZulu (land of the Zulu), a homeland created by the South African government in 1972.

xxxxxIncidentally, a measure of Shaka’s cruelty can be seen in 1827. In that year his mother Nandi died and, stricken with grief, he launched a cruel campaign of violence against his own people. Some 7,000 were massacred - mainly on the grounds that they had not shown sufficient remorse - and this number included all pregnant women and their husbands. And during an official year of mourning he banned the growing of crops and the consumption of milk, leaving many to die of hunger. ……

xxxxx……  In about 1824 Shaka made contact with a number of Europeans who had settled at Port Natal (modern Durban). Intrigued by their way of life, he allowed them to stay, and two of their number, having mixed freely with the Zulus, left the only written account of the early history of the Nguni people. ……

xxxxx…… The South African writer Thomas Mokopu Mofolo (1877-1948) wrote an historical novel based on the life of Shaka. Entitled Chaka the Zulu, it was published in 1925 and, today, is regarded as his masterpiece. Written in his native Southern Sotho, it has become a classic in that language.