xxxxxThe German brothers Jakob and Wilhelm Grimm are remembered today for their fairy tales, contained in their two volumes of Nursery and Household Tales, published in 1812 and 1815. They collected these stories over a number of years, mainly from relatives, friends and village folk. Amongst the 210 stories collected were Hansel and Gretel, Sleeping Beauty, and Snow White and the Seven Dwarfs. These tales inspired a number of opera composers, including Engelbert Humperdinck and Sergei Prokofiev. Both brothers were interested in the development of the German language and German literature, and both worked on producing the first volumes of a monumental German Dictionary. 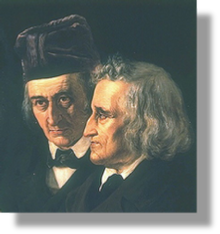 xxxxxIt was in 1812 that the German brothers Jacob and Wilhelm Grimm published their first collection of Nursery and Household Tales. A second volume appeared in 1815 and, after revision and additions, the final collection contained a total of 210 stories. They were translated into some seventy languages and, in the English version, were published under the title of Grimm’s Fairy Tales. Both brothers were enthusiastic collectors of these timeless stories. They were mostly obtained from relatives, friends and village folk, and included popular tales like Hansel and Gretel, Tom Thumb, Snow White and the Seven Dwarfs and Rumpelstiltskin (illustrated below). Most of these had a lesson to tell about the dangers of life, and many made good use of witches, goblins and trolls to get their message across!

xxxxxBut both brothers were also talented in other directions. Whilst Wilhelm, the more literary of the two, played the major part in compiling the fairy stories, he also produced Old Danish Hero Songs, a treatise on German Heroic Legends, The Song of Roland, and a work on Old German Speech. Jacob, on the other hand, was the greater scholar, and was particularly interested in the structure of language. With the help of Wilhelm he began compiling a standard German Dictionary, a work which became a model for dictionaries in many other languages. Such was the scope and thoroughness of this

monumental task that the first volume was not published until 1852, and the work as a whole was not completed until 1860. Furthermore, in 1822, as professor of philology at Göttingen, Jacob formulated what came to be known as Grimm’s Law - a scientific explanation of the changes in consonants in the development of the German language -, and he followed this up with a German Grammar in four volumes, begun in 1819; a treatise on ancient Germanic law; a work on German mythology; and a brilliant history of the German language. 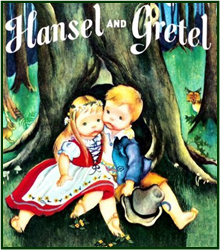 xxxxxThe Grimms were born in Hanau, central Germany, and were educated at the University of Marburg. Although Jacob remained a bachelor, and Wilhelm married and had three children, they lived and worked together for most of their lives. They found employment in Kassel for a time. They worked in the Elector’s library for the most part, but Jacob also worked as a secretary in the diplomatic service and, as such, attended the Congress of Vienna in 1815. Then in 1830 they obtained positions at the University of Gottingen, Wilhelm as a librarian and Jacob lecturing in philology. They were eventually appointed teachers at the Prussian Academy of Sciences in Berlin, and it was here that they spent the remainder of their lives.

xxxxxIncidentally, the German romantic painter Philipp Otto Runge (1777-1810) illustrated some of the Grimm fairy tales. His style was not unlike that of the English visionary artist William Blake. …… These fairy stories were the inspiration for a number of operas, including Hansel and Gretel by the German composer Engelbert Humperdinck, first performed in 1893, and Sleeping Beauty by the Russian composer Sergei Prokofiev. Of course, Walt Disney’s animated screen versions made many of them world famous. 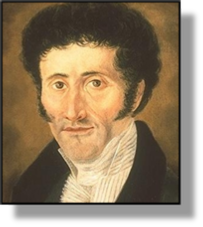 xxxxxIt was in 1816 that the German writer and composer Ernst Theodor Amadeus Hoffmann (1776-1822) produced his own Fantasy Pieces, four volumes which included most of his weird and wonderful tales. His short stories, in the best tradition of romantic fiction, are very rich in imagination and, in many cases, blend the realm of make-believe with the world of reality. They range from the fanciful to the supernatural and grotesque, and, whilst they are not without touches of humour, many attempt a penetrating, almost psychological analysis of human behaviour. A master teller-of-tales, he played a leading part in the romantic movement in German literature at that time. 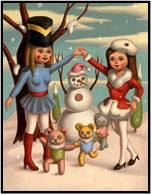 xxxxxAmong his famous works are The Golden Pot, Nutcracker and the novel The Devil’s Elixir. These and other stories inspired a number of musical compositions. These include The Mastersingers of Nurnberg by the German composer Richard Wagner in 1868, the ballet Coppélia of 1870 by the French composer Léo Delibes, Tales of Hoffmann, by the French composer Jacques Offenbach, first performed in 1881, and The Nutcracker, a ballet suite by the Russian composer Pyotr Tchaikovsky, produced in 1892.

xxxxxToday, Hoffmann’s fame rests chiefly on his bizarre tales of fantasy, both as author and librettist, but, in his day, he was also a recognised composer and conductor. He composed the opera Undine in 1816, as well as much religious and incidental music. As a knowledgeable music critic he greatly admired the works of Wolfgang Amadeus Mozart, Ludwig van Beethoven, and Johann Sebastian Bach. However, he failed to make a sufficient living from his music and literary talent - especially in the Napoleonic period - so for much of his working life he served as a legal advisor within the Prussian civil service.

xxxxxIncidentally, Hoffman so admired the work of Mozart that in 1813 he changed his third name, Wilhelm, to Amadeus. Indeed, he is sometimes referred to as Amadeus Hoffmann.

xxxxxIt was in 1816 that the German writer Ernst Theodor Amadeus Hoffmann (1776-1822) produced his own Fantasy Pieces, four volumes of weird and wonderful tales. Very rich in imagination and ranging from the fanciful to the super-natural and grotesque, they often blend make-believe and reality together, and study in depth the reasons for human behaviour. These stories, such as The Golden Pot, Nutcracker and the novel The Devil's Elixir, inspired a number of musical compositions, including Offenbach’s Tales of Hoffmann, Wagner’s The Mastersingers of Nurnberg, Delibes’ ballet Coppélia, and Tchaikovski’s ballet suite The Nutcracker. Hoffman was also a recognised composer, but his fame today rests on his bizarre tales of fantasy, a contribution to the romantic movement affecting German literature at that time.

xxxxxIt was at this time that the fairytale play based on the legend of Aladdin was produced by the poet and playwright Adam Gottlob Oehlenschlager (1779-1850), leader of the romantic movement in Denmark. It appeared in his Poetic Writings under the title Aladdin of the Wonderful Lamp. In this instance, however, it was a serious dramatic work in which the magic lamp represented the power and influence of poetry in his own life. He also wrote works on Nordic history and mythology, and a tragedy Correggio, a work based on the turbulent life of the 16th century Italian painter. During his travels in Europe he met leaders of the romantic movement, including Goethe. 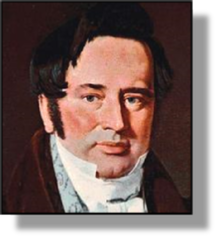 xxxxxIt was at this time that the fairytale play based on the legend of Aladdin was produced by the Danish poet and playwright Adam Gottlob Oehlenschlager (1779-1850). Following the publication of his symbolic lyric poem The Golden Horns in 1802, he came to be regarded as the leader of the romantic movement in Denmark. Three years later he published his Poetic Writings, and these contained his fantasy play Aladdin of the Wonderful Lamp. In this instance, however, it was produced as a serious dramatic work in which the magic lamp represented the power and influence of poetry in his own life.

xxxxxHis plays are mostly based on Nordic history or mythology, and include three historical tragedies Earl Hakon the Great, the famous national hero, published in 1807, Baldur the Good of 1808 and Axel and Valborg, completed in 1809. His Nordic verse cycles Helge appeared in 1814, and his huge epic poem Gods of the North, five years later. Mention must also be made of his tragedy Correggio, based on the turbulent life of the 16th century Italian painter. 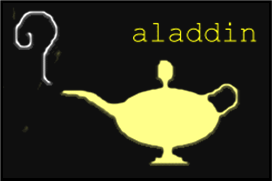 xxxxxOnce established as a national poet, he spent four years travelling around Europe, and it was then that he met leaders of the romantic movement, including Goethe, and wrote his most famous tragedies. Soon after his return in 1809, he was appointed professor of aesthetics at Copenhagen University. His historical works were immensely popular at the time, but today Oehlenschlager is mostly remembered for his lyric poetry.

xxxxxIncidentally, in 1820 Oehlenschlager wrote the words for the Danish national anthem: “There is a lovely land”.

xxxxxYet another story teller at this time was the German dramatist and poet Heinrich von Kleist (1777-1811). Today, he is best remembered for his amusing but barbed social commentary entitled The Broken Pitcher (1808), a one act play in verse centred around a village trial over a broken jug. Influenced by the writings of the philosopher Kant, his work was often based around troubled, violent themes depicting man’s struggle against fate and the forces of nature. His short novels included Michael Kohlhoss and The Earthquake in Chile, and among his best known dramas were The Family Schroffenstein, Amphitryon and Penthesilea. His patriotic The Prince of Homburg is now regarded as his psychological masterpiece. His grim dramas and novels were not popular in their day, but their worth has since been appreciated. Saddened by his lack of success and the French occupation of his land, he shot himself in 1811. 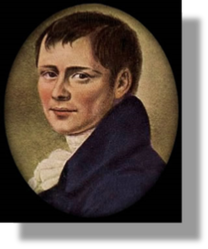 xxxxxYet another story teller at this time was the German dramatist and poet Heinrich von Kleist (1777-1811). Today, he is particularly remembered for his down-to-earth one act comedy in verse entitled The Broken Pitcher (1808), an amusing but socially critical play centred around a village trial over a broken jug. His short novels, generally full of tragedy and violence, included Michael Kohlhoss, the Marquise of O, and The Earthquake in Chile. As a dramatist he was much influenced by the philosophy of Kant, and, as a result, three of his works in particular - The Family Schroffenstein (1803), Amphitryon (1807) and 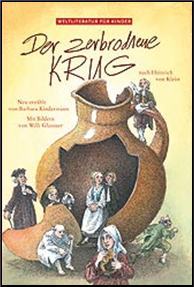 the Amazon tragedy Penthesilea (1808) - were gloomy, psychological studies, dwelling on man’s helplessness in the hands of fate. He also wrote the drama Katherine of Heilbronn, and the political tragedy The Warrior’s Battle. His last play, the patriotic The Prince of Homburg, a masterpiece of construction and characterisation, is generally considered his best work but, unfortunately, he could find no publisher for it during the French occupation.

xxxxxKleist’s novels and plays, many with grim, emotional themes, were not popular in their day. and this was a great disappointment to him. Then in 1811 his newspaper Berliner Abendblatter, seen as a vehicle for German nationalism, was suppressed by the government. Deprived of his livelihood, and deeply depressed by the continuing occupation of his country, he took his own life in a suicide pact, shooting himself and a woman acquaintance who was incurably ill. It was a dramatic ending to what was a troubled and largely unfulfilled life. It was to be some years before his worth as a romantic poet and dramatist gained the recognition it deserved.