xxxxxDuring the French Revolution and the wars that followed, the papacy suffered badly, particularly at the hands of Napoleon. Pius VI, who reigned from 1775 to 1799, struggled to keep his authority in a number of states, notably the Austrian Habsburg dominions, while in France the revolutionary government virtually took over the Catholic Church. Then in 1797 Napoleon seized part of the Papal States, and Rome was occupied and declared a republic. Pius was imprisoned and died in captivity. Pius VII (1800-23) tried to come to terms with Napoleon. By the Concordat of 1801 he retained the Papal States, but had to agree to a complete reorganisation of the Church in France in favour of more state control. He attended the coronation of Napoleon in 1804 in the hope of regaining a measure of prestige, but during the ceremony Napoleon chose to crown himself, and the dispute rumbled on. Matters came to a head in 1809 when the Emperor took over the Papal States and imprisoned Pius. On his return to Rome in 1814, he set about re-imposing the authority of the pope with some success, and he re-established the Jesuits - banned in 1773 - to work in education and missionary work. Meanwhile, the Congress of Vienna restored the Papal States and upheld Vatican neutrality. By his work Pius VII did much to restore the prestige of the papacy. 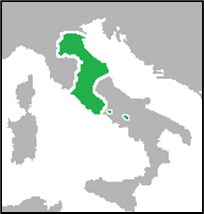 xxxxxWhen Pope Pius VII returned to Rome in 1814, released by Napoleon after five years of captivity, he faced a daunting task. During the French Revolution and the Revolutionary and Napoleonic Wars that followed, the papacy had been threatened, attacked and then overwhelmed by the forces of change which engulfed Europe. In 1809 Napoleon, having occupied Rome, annexed the Papal States (illustrated) into his empire and imprisoned the pope. At no time in its chequered history had the papacy suffered a more humiliating defeat at the hands of a secular power. 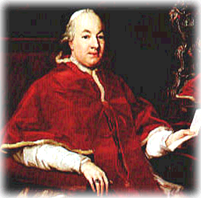 xxxxxThe reign of the previous pope, Pius VI (1775 to 1799), had been the longest of the century and, as it so happened, one of the most disastrous. The last twenty years of his pontificate was marked by a continuous struggle against the rulers of Naples, Tuscany, Austria and France, all bent on reducing the power of the pope in the administration of their churches. In 1781, for example, Joseph II, ruler of the Austrian Habsburg dominions, by his Edict of Toleration, granted religious rights to non-Catholics, took over the schools for training the clergy, and sold off a number of monasteries, pocketing the proceeds. In challenging this “Josephinism”, as it came to be called, Pius personally visited the Emperor at Vienna, but failed to make him change his ways. Nor did his bull Auctorem Fidei of 1794, which condemned Naples and Tuscany as well as Austria for their restrictions on papal authority, make any difference.

xxxxxWorst was to follow. With the outbreak of the French Revolution, all church property in France was taken over, and by the Civil Constitution of the Clergy of 1790 all priests were obliged to swear an oath of allegiance to the new regime. In response, Pius denounced this constitution in March 1791, suspended all those who had taken the oath, and declared the revolution “unholy”. In fact, such measures only served to leave the French Catholic Church hopelessly split between papal and state allegiance. Then in 1797, after Napoleon had completed his successful campaign in Italy, parts of the papal states were handed over to the new Cisalpine Republic, and the following year a French army occupied Rome, allowing a triumphant group of Italian patriots to declare the city a republic. Pius refused to renounce his political authority, was taken prisoner, and dragged off to France. Aged, sick in body and totally humiliated, he died there in 1799. 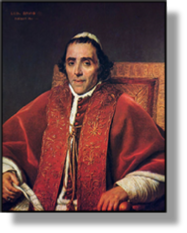 xxxxxNot since the Babylonian Captivity and the Great Schism of the 14th century had papal authority been reduced to such depths - and it was against this background that Pope Pius VII took office, elected at a meeting of cardinals held in Venice in 1800. Rightly or wrongly, he decided to take a more conciliatory line, and sought a compromise settlement with Napoleon. The following year, despite some opposition within the church hierarchy, he negotiated the Concordat of 1801. He recognised the French Republic and, in return, retained the Papal States. However, he agreed to a complete overhaul of the church’s organisation in France in favour of more lay authority. This included the giving up of all the church property which had already been taken over by the state, the resignation of all surviving bishops, and the appointment of new prelates by the First Consul. Then in 1802 the agreement was virtually blown apart when the French government added a proviso, declaring that the pope had no jurisdiction in the affairs of France without its permission. 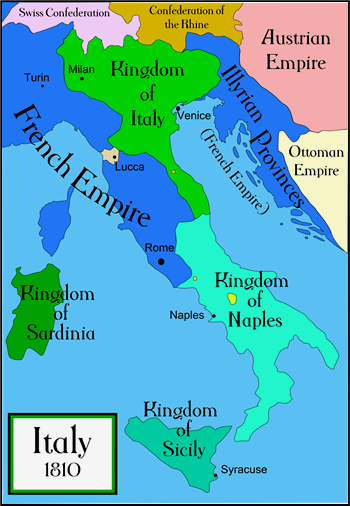 xxxxxNevertheless, in 1804 Pius agreed to travel to Paris to take part in Napoleon’s coronation. He saw this as an opportunity to regain his temporal authority and have the concordat modified. But any hopes of crowning the new emperor and earning the prestige that went with such an action were quickly dashed during the ceremony, when Napoleon picked up the crown and crowned himself! With no prospect of a better understanding with the new emperor, relations between the two became progressively more strained. Matters came to a head in 1808 when Napoleon occupied Rome and then, in 1809, annexed outright the Papal States. The pope immediately excommunicated the French emperor - a courageous act given the circumstances - and once again the pontiff found himself a prisoner of the French, this time until 1814. He was imprisoned for a while in Savona, Italy, and then in June 1812 removed to Fontainebleau. In captivity, however, and much to his credit, he consistently refused to serve as a political pawn in the service of Napoleon.

xxxxxHis return to Rome in the spring of 1814, set free by Napoleon, was something of a triumph. His laudable conduct during his captivity, and his earlier attempts to resist Napoleon and save a crumbling, discredited papacy had earned him a great deal of sympathy and respect. At the Congress of Vienna most of the papal territory was restored, and Vatican neutrality was upheld. He then spent the next ten years in revitalising the Catholic Church and re-imposing papal authority. In so doing he succeeded to a large extent in restoring the prestige and moral integrity of the papacy.

xxxxxAs in his earlier days, he adapted his political policy to meet changing needs. In France, for example, he was able to repeal much of the anti-papal legislation, whilst in Italy he attempted to suppress the Carbonari, a secret society which he saw as undermining political authority. He recognised the republics emerging in Latin America, but was less successful in maintaining his authority in Germany and Austria, where liberalism was putting a curb on papal power. In church matters he took a strong line in defending traditional doctrine, and he sponsored education reform. And it was with this in mind that in 1814 he re-established the Society of Jesus on a worldwide basis. Suppressed, as we have seen, by Pope Clement XIV in 1773, it was now given a new lease of life, especially in education and missionary work. Jesuit schools and universities were reopened in North America and across Europe, and Jesuit missions soon became the dominant religious order overseas, especially in Africa and Asia. Since its revival, the society has attracted some opposition, mostly in connection with its fringe involvement in some areas of politics. 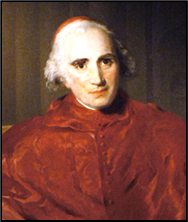 xxxxxIncidentally, in his work as pope, Pius VII was greatly assisted by the cardinal and statesman Ercole Consalvi (1757-1824). He played a leading and crucial role in the affairs of the papacy during and immediately after the Napoleonic Wars. He negotiated the Concordat of 1801 - the agreement with Napoleon over the status of the church in France - and on being exiled during the pope’s imprisonment, he continued to oppose Napoleon and to defend the temporal authority of the papacy. After the defeat of Napoleon he attended the Congress of Vienna on behalf of the Vatican and argued successfully for the restitution of nearly all of the former Papal States. ……

xxxxx…… Asxwe have seen above, in 1781 Joseph II, like other European rulers at this time, took measures to curb papal power in his Habsburg dominions. At that time, this policy came to be known as “Josephinism” (understandably so), but the theological term for such a doctrine - the restriction of papal authority within a state - is “Febronianism”, a policy founded in Germany by the German theologian Justinus Febronius (real name Johann Nikolaus von Hontheim) in 1763. In France this doctrine became known as “Gallicanism”.

xxxxxIn 1802 the French romantic novelist François René Chateaubriand (1768-1848), lent welcome support to the papacy with his treatise entitled The Genius of Christianity. This work, which emphasised the part Christianity had played and was playing in the development of European culture - as in literature, architecture and art - did much to restore the standing of Roman Catholicism. As a writer his major works were his two novels Atala and René, and Memoires from Beyond the Tomb, an autobiography written for publication after his death. He became a diplomat on the return of the French monarchy in 1814. 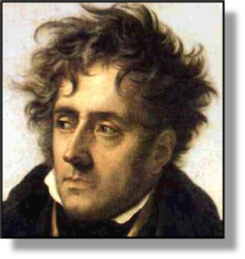 xxxxxA man who lent welcome support to the papacy at this time was the French romantic novelist François René Chateaubriand (1768-1848). In 1802 he published his The Genius of Christianity, a treatise in which he stressed the part that Christianity had played and continued to play in the development of European culture. Its contribution over the centuries in architecture, art and literature, he argued, assured its superiority over other religions, aesthetically as well as morally. This work won him the favour of Napoleon, and did much to restore the status of Roman Catholicism at this time. The portrait is by the French artist Anne-Louis Girodet-Trioson (see below). 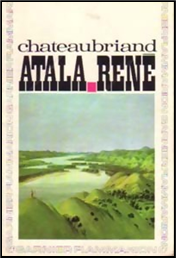 xxxxxAs a writer, Chateaubriand is remembered above all for two novels: Atala of 1801, an exotic tale of a “noble savage” based on his own travels in the Indian country of North America; and René, a work which, published in 1805, began the Romantic vogue for the mal du siècle (the malady of the age) - the trials and tribulations of a melancholy, frustrated hero who has become weary of the world. Chateaubriand is also remembered for his Mémoires d’Outre-Tombe (Memoires 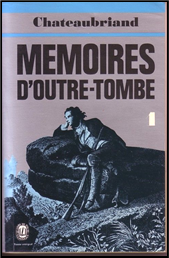 from Beyond the Tomb), a revealing account of his own life and character, written for publication after his death.

xxxxxHe was elected to the French Academy in 1811, and on the return of the monarchy, was made a peer in 1815 and became a diplomat. He served as ambassador to Britain in 1822 before becoming his country’s minister of foreign affairs, a post he held until 1824. During these post-Napoleon years he was a close friend and admirer of Madame de Récamier, and a leading member of her salon, held in the old convent of Abbaye-aux-Bois in Paris.

xxxxxIncidentally, in 1808 the French painter Anne-Louis Girodet-Trioson (1767-1824), inspired by Chateaubriand’s Atala, produced his Burial of Atala, a painting which heralded the French romantic movement. A pupil of Jacques-Louis David, he is also remembered for his Ossian Receiving the Ghosts of Dead Heroes, a study in Celtic mythology painted for Napoleon’s residence Malmaison, his château just outside Paris. Both paintings are shown below, together with his The Sleep of Endymion.