xxxxxThe English philanthropist Elizabeth Fry, a leading Quaker, devoted much of her time to the care of the poor. In 1813, after a visit to Newgate prison in London, she became particularly interested in penal reform, especially in the treatment of women prisoners. Like her compatriot John Howard before her, she campaigned for improvements, calling for the classification of prisoners, separation of the sexes, and better food and clothing. She also argued that prisoners needed to be usefully employed and educated, including religious instruction. She spent many years visiting prisons in Britain and on the continent, and became famous for her reading and preaching at Newgate. She also voiced her concern about the appalling conditions aboard ships taking convicts to Australia, and demanded better hospital care for the mentally disturbed. 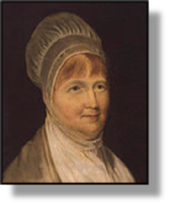 xxxxxThe English philanthropist Elizabeth Fry, née Gurney, was born at Norwich, Norfolk, the daughter of a wealthy banker. She became a Quaker, like her father, in 1798, and two years later married Joseph Fry, a London merchant. Despite a large family, she devoted much of her time to the care of the poor, and for this work was made a “minister” by the Society of Friends in 1811. She became particularly interested in penal reform after visiting Newgate prison in London in 1813. From this time onwards she began visiting prisons all over the country, travelling to Scotland and Ireland and, later, making lengthy tours on the continent. Apart from reading the bible and preaching to the inmates, she wrote reports on the conditions she found, and testified before parliamentary committees.

xxxxxPrison reform was certainly a pressing social need. Conditions in the country’s prisons at this time were atrocious. Be they thieves, murderers, debtors, or just waiting to be tried, men, women and children were herded together like animals, living their days in filthy conditions, prone to disease, and at the mercy of each other. The food allowance was meagre. Only those who had ready cash were able to pay the jailer or “turnkey” to keep them fed, and prisoners who had no family or friends to care for them had to beg for scraps or come close to starvation. As we have seen, in 1777 the London philanthropist John Howard published a book on the state of prisons in England and Wales. He advocated basic rules of hygiene and the setting up of rehabilitation centres, but little was done by way of improvement. 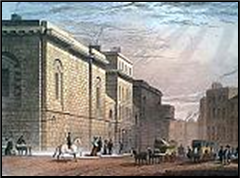 xxxxxIn her own charity work, Fry was particularly appalled at the treatment of female prisoners and, after her visit to Newgate (illustrated) made public her concern, calling for a separation of the sexes, the classification of prisoners, better food and clothing, and a greater degree of supervision. She also argued that prisoners needed to be usefully employed, and given religious and secular instruction. In 1817 she set up the Association for the Improvement of Female Prisoners to provide for some of these needs and, together with her brother, Joseph Gurney, issued a report on prison reform two years later.

xxxxxElizabeth Fry was one of the leading prison reformers of her day. Apart from her work in Britain, she visited prisons in Europe where she lectured to a wide audience and urged governments to institute prison reform. At home she complained of the conditions endured by convicts on their voyage to penal settlements in Australia, and she also put forward ideas to improve hospital treatment - especially that related to the care of the mentally disturbed. She also helped in the setting up of a shelter for the homeless in London, and introduced a library service for coastguards. Her campaign in such matters began a movement of reform, and she lived long enough to see some improvements put into operation.

xxxxxIncidentally, her work for the poor and her tireless efforts in the cause of prison reform made her famous. She was referred to as “the genius of good” and “the Prisoners’ Friend”, and her reading sessions to the prisoners in Newgate became one of the “sights” of London. ……

xxxxx…… She died at Ramsgate, Kent, in 1845, and was buried at the Friends’ Burial Grounds at Barking, Essex. £4,000 was raised in her memory and, fittingly, this was used to establish the Elizabeth Fry Refuge in Mare Street, Hackney, London, a hostel for women in need. In 2002 her portrait was featured on the Bank of England £5 note, and this renewed interest in her. The following year a new memorial stone was erected in her memory, a marble plaque bearing her portrait and brief details of her life. ……

xxxxx…… In 1806 work began on the building of Princetown Prison, situated on the bleak area of Dartmoor in Devon. It was originally built to hold French prisoners from the Napoleonic Wars, but since 1850 has been one of England’s major centres for serious offenders.

xxxxxAnother social reformer at this time was the Welsh cotton mill owner Robert Owen (1771-1858). He became manger of mills at New Lanark, Scotland, in 1813, and set about improving the working and living conditions of his workers. Acting on the theory that environment alone determined a person’s character, he opened up an infant school (the first in England), provided medical care for the worker and his family, and introduced leisure activities. These measures proved financially as well as socially successful, and industrialists, politicians and reformers came to see his project in action. In 1825, believing that people would live happy, fulfilled lives in a co-operative community, free from private ownership, personal wealth and family ties, he established a socialist commune in Indiana in the United States, but this failed through disagreements, as did a later experiment in Hampshire, southern England. A staunch supporter of the emerging trade union movement, he formed his Grand National Consolidated Trades Union in 1833, but this proved premature and collapsed. Regarded today as the father of the co-operative movement and a prime leader of British socialism, he had a marked influence on the German leader Friedrich Engels - who wrote articles for him and became co-author of the Communist Manifesto in 1848 (Va) - and on the French social philosophers Pierre Joseph Proudhon, Charles Fourier and Étienne Cabet. 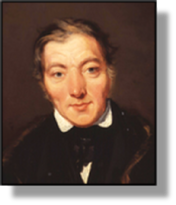 xxxxxIt was in 1813 that another social reformer at this time, the self-made capitalist and cotton mill owner Robert Owen (1771-1858), published his A New View of Society. In this work he argued that environment alone determined a person’s character, and it was therefore important to improve the living and educational standards of the working people. He was soon able to put his theory into practice, both at home and overseas.

xxxxxOwen was born in Newtown, Wales, youngest son of the village postmaster. He began his working life as an apprentice draper, and by the age of 20 had saved and borrowed sufficient funds to become the manager of a large textile mill in Manchester. In 1800 he persuaded his partners to purchase the New Lanark Mills in Lanarkshire, Scotland, and it was then that, appalled by the squalid state then prevailing in the factory system, he began his social experiments. Initially, these prove 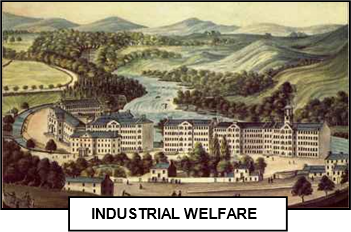 d costly, and in 1813 he was obliged to buy out his disgruntled partners and set up a new undertaking financed by philanthropists and reformers, among whom was the English philosopher Jeremy Bentham. It was then that he was able to carry out a full programme of reform. He quickly set about improving the housing and working conditions of his employees, introducing medical care for their families and providing education for the young - instead of employing them as cheap labour in the factory.

xxxxxThis welfare scheme included Britain’s first infant school, opened in 1816, an “Institute for the Formation of Character”, and leisure activities for his employees and their families. Contrary to expectations, these measures proved highly successful financially as well as socially. They increased commercial output and produced a substantial profit as a result. Many industrialists, politicians and social reformers visited the mills to learn lessons from the enterprise. 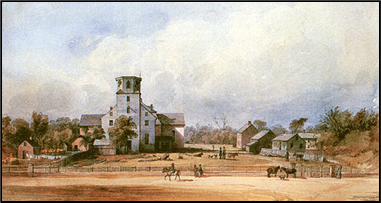 xxxxxIn 1817, anxious to expand upon this idea of a model industrial community living in harmony, he proposed the setting up of “villages of unity and co-operation”, each about 1,000 strong and totally self-supporting. He saw this experiment as part of a wider co-operative movement which would eventually do away with the idea of private ownership, individual wealth, and even the traditional family unit. This utopian, socialist enterprise was put to the test in 1825. In that year he gave up his management of New Lanark and established a co-operative community on a 20,000 acre site in Indiana in the United States. It proved a failure. Developed at New Harmony on the banks of the Wabash River (illustrated), it was hastily put together and barely survived three years. Arguments broke out amongst the volunteer settlers, the administration collapsed, and Owen lost all the money he had invested in the project - the bulk of his personal fortune. A second attempt, established at Queenwood, Hampshire, in southern England, in 1839, suffered the same fate, though it lasted some six years.

xxxxxIn the early 1830s Owen became a leading figure in the emerging trade union movement, but his attempts to combine the country’s work force in his Grand National Consolidated Trades Union proved premature and met with failure. However, the Rochdale Pioneers, an international co-operative movement established in 1844, bore the hallmarks of his assertion that, at root, the source of a country’s wealth lay in its labour force. And such ideas had a profound effect upon the labour movement as a whole and British socialism in particular. Together with Bentham, he placed the state at the heart of social reform, making it fully responsible for the welfare of its people.

xxxxxOwen’s influence on the continent was substantial. The touch of communism in his doctrines - notably the common ownership of land and property - attracted the likes of the German socialist Friedrich Engels, who produced articles on social matters for Owen. He later published a devastating attack upon the pitiful plight of English factory workers and, three years later, along with Karl Marx, wrote the Communist Manifesto of 1848. And Owen’s writings and social experiments also influenced a number of French social philosophers, including Charles Fourier (1772-1837), Étienne Cabet (1788-1856) and Pierre-Joseph Proudhon (1808-1865). In the 1840s Proudhon opposed the concentration of wealth, arguing that “property is theft”, and utopian communities were set up in the United States based on the ideas of Fourier and Cabet. 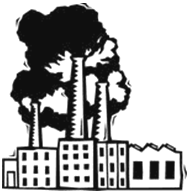 xxxxxIn his later years, Owen spent a great deal of his time putting forward his ideas on the place of education, religion and marriage in society, and supporting birth control for the poor. He gave a full and lucid account of his theories in his Book of the New Moral World, produced in seven parts and completed in 1844. Apart from his marked influence on the growth of socialism in Britain - where he has become regarded as the father of the co-operative movement -, and his impact on social reformers on the continent, his stress on the effects of environment played a significant role in highlighting the plight of the working classes at a crucial time in the Industrial Revolution. The Factory Act of 1819, which, like the earlier one of 1802, provided a measure of protection for children employed in industry, owed much to his

xxxxxIncidentally, the community known as New Harmony, established by Owen in Indiana, replaced a commune set up by the German-born religious leader George Rapp (1757-1847) (illustrated) in 1814. Known as Harmony, he sold the land to Owen in 1825, and settled on a site near Pittsburgh. This colony slowly dwindled in number and was finally closed in 1906. ……

xxxxx…… The Grand National Consolidated Trades Union, founded by Owen in 1833, proved impractical at the time and was disbanded the following year, but it had an important consequence. As we shall see, the six Dorset farm labourers - the Tolpuddle Martyrs - were convicted that year, 1834 (W4), and transported to Australia for establishing the Friendly Society of Agricultural Labourers, a union attached to the GNCTU.