xxxxxThe French painter Théodore Géricault is especially famous for his The Raft of the Medusa of 1818, a scene from a real-life drama of two years earlier, when 135 crew members were put adrift on a raft following the founding of their frigate, the Medusa. This highly dramatic work, depicting their ghastly suffering and their frantic attempts to attract the attention of a passing ship, marked the real beginning of the French romantic movement in art. Earlier works, influenced by the romantic painter Antoine Jean Gros, were his The Charging Chasseur of 1812 and his Wounded Cuirassier two years later. He spent some time in Italy, deeply moved by Renaissance art, and he visited England and Ireland in 1820-1822. While there he produced The Derby at Epsom, and a portrait of the Prince Regent. On returning to Paris, he painted five portraits of mentally disturbed people to assist medical science, but early in 1823, suffering himself from severe depression, he fell seriously ill and died a year later, aged 33. Apart from his oil painting, he was a talented graphic artist, and left a large number of drawings and lithographs. His close friend, the young artist Eugène Delacroix, became the next and greatest exponent of French romanticism. He was deeply impressed with the Raft of the Medusa and, as we shall see, the theme of this work is echoed in his own Massacre at Chios, an incident in the War of Greek Independence of 1821 (G4).

xxxxxThe French painter Théodore Géricault, an artist of outstanding talent, is remembered above all for his The Raft of the Medusa, begun in 1818 and exhibited a year later. This vast, impressive canvas, together with his realistic portraits of the insane in the early 1820s, removed French art from the sterile neoclassicism of the Napoleonic era, and, following on from the works of Antoine Jean Gros, marked him out as the true precursor of the romantic movement. He it was who answered the call of the young reactionaries: “Who will deliver us from the Greeks and Romans?”

xxxxxGéricault, born into a wealthy family in Rouen, began his training as an artist at the age of 17. He first studied under Carle Vernet, a painter who specialised in hunting and racing scenes, and then in 1810 became a pupil of the academician Pierre Guerin, studying figure construction and composition. It was at this stage that he came to admire the works of his older colleague Antoine Gros, an artist famous for his gung-ho battle scenes. His first painting of note, exhibited in 1812, clearly showed the influence of this romantic painter. Entitled The Charging Chasseur, and bursting with colours that came straig 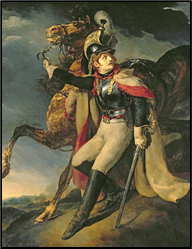 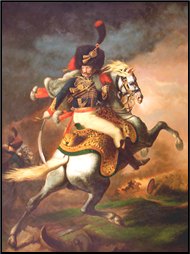 from the palette of the Flemish artist Rubens, it typified the daring, dash and determination of one of Napoleon’s cavalry officers in action. Its vitality created a sensation. However, he followed this up two years later with his Wounded Cuirassier, a companion work which, in marked contrast, was sombre in both mood and colour, doubtless reflecting Napoleon’s declining fortunes. A lone soldier limps off the battlefield, not so much a hero as a figure of suffering and endurance (both illustrated here).

xxxxxIn 1816 Géricault left Paris and went to Italy, visiting both Rome and Florence. Here he was deeply impressed with the beauty and vibrancy of Renaissance art. One account tells of his “trembling” with wonder when contemplating the works of Michelangelo. While in Rome he produced a large number of drawings depicting classical scenes and contemporary subjects, and these testified to his outstanding talent as a graphic artist. And having witnessed the race of riderless horses, held during the city’s annual carnival, he contemplated a monumental canvas to capture the sheer beauty and movement of this powerful event. He made numerous sketches for this would-be masterpiece but, unfortunately, his Race of the Riderless Horse never reached the canvas. 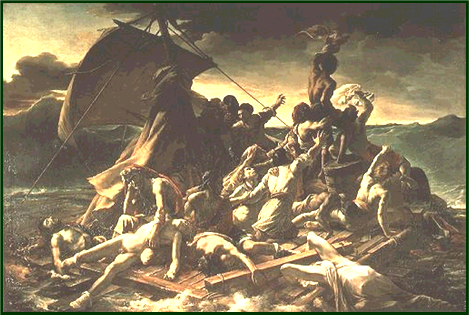 xxxxxIt was on his return from Italy in 1818 that Géricault began work on his famous painting, The Raft of the Medusa. This was a remarkable canvas for a number of reasons. Firstly, it was closely based on a real-life drama that had happened in 1816. Much to the embarrassment of the French government, a naval frigate, the Medusa, had run aground on its way to Senegal, and a raft carrying 135 members of the crew had been abandoned by the ship’s officers. When it was eventually rescued, thirteen days later, it was evident that, in order to survive, some of the shipwrecked had resorted to murder and cannibalism. Severed heads and limbs were found on the raft, and only 15 had survived the horrifying ordeal. Secondly, in the production of this painting Géricault took infinite pains to piece together the events of this tragedy. He had a copy made of the raft, made sketches of corpses, and interviewed some of the survivors, using them as models in a mock-up of the scene. We are told that the young painter Eugène Delacroix, a great admirer of Géricault’s work, was amongst others who took part in the reconstruction. He is said to be the slumped figure on the extreme left with his head jerked backwards against the edge of the raft.

xxxxxThirdly, Géricault conveniently captures this grim tale at the dramatic moment when a ship appears on the horizon and when, for those still conscious, despair and suffering give way to hope and joy. Furthermore, the emotional intensity of this scene, full of compassion and heroic endeavour, is highlighted by the brilliant composition of the figures, the ray of light upon the tortured bodies, the leaden sky, the tossing sea, and the outstretched arms. In theme and treatment it had all the requirements of pure romanticism and - not surprisingly - it marked the true beginning of the romantic movement in French art. Gros had given it life, and it was to be left to Delacroix to take it even further along its way. 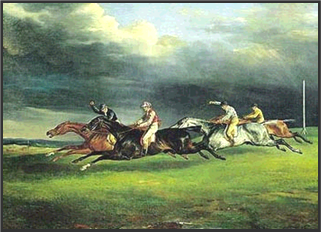 xxxxxAt the Paris Salon of 1819 this vast, grandiose painting (measuring 23ft by 16ft) was not well received. Initially, its political undertones, its size and unorthodox methods of production, and its disturbing mixture of realism and idealism, found little favour with the general public and, as to be expected, attracted nothing but abuse from the adherents of neoclassicism. Disillusioned and depressed, Géricault paid a visit to England in 1820 and found a measure of consolation. There and in Ireland his masterpiece was well received, as were the sporting prints he produced, and his watercolours and lithographs of London street life. Amongst his works at this time were an equestrian portrait of the Prince Regent, and The Derby at Epsom of 1821 (illustrated). While in England he was particularly impressed by the works of John Constable and Richard Parkes Bonington. 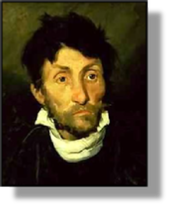 xxxxxHe returned to Paris in 1822, and it was then that he painted a series of five realistic portraits of mentally ill patients in the Salpêtrière Hospital. Such an unusual, disturbing subject was in keeping with romanticism, but, in fact, they were executed at the request of a psychiatrist in order to illustrate different varieties of mental illness. (One of the five, a kleptomaniac, is shown here). By this time, however, Géricault was himself in poor health. A depressive by nature, he was taken seriously ill early in 1823, an illness aggravated by a riding accident, and after several months of suffering, borne stoically, he died in January 1824, aged 33. The genre paintings he produced shortly before his death, such as The Lime Kiln, are forbidding and bleak, in keeping with his own disturbed state of mind. It is shown below together with Self-Portrait, Head of A White Horse, and An Italian peasant.

xxxxxApart from his work in oils, Géricault was a talented graphic artist, with a remarkable ability in capturing animals in movement. He produced some superb lithographs - many on military subjects - and he left a vast number of drawings and colour sketches. As we have seen, he was a close friend of Eugène Delacroix, and it was this young artist who was to become the next and greatest exponent of French Romanticism. He was deeply impressed with the Raft of the Medusa and, as we shall see, the theme of this work is echoed in his own Massacre at Chios, an incident in the War of Greek Independence which broke out in 1821 (G4).

xxxxxIncidentally, the Medusa was one of four ships that set sail for Senegal in June 1816. The squadron was commanded by Viscount Hugues De Chaumereys, a man with very little naval experience. His flag ship, the Medusa, was carrying some 400 men, women and children, including the new Governor of Senegal and a crew of 160. In order to reduce the length of the voyage De Chaumereys chose to sail close to the African coast, despite warnings from more experienced sailors. 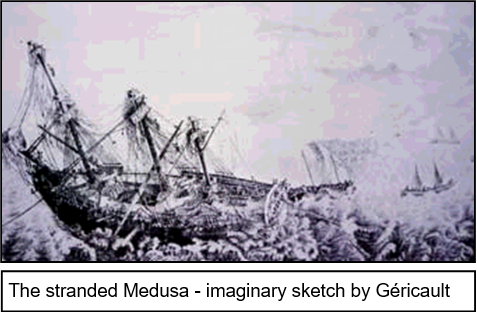 xxxxxAt the beginning of July the ship ran aground on the notorious Arguin Bank, some thirty miles off the West African coast. Obliged to abandon ship, he put his senior officers and passengers in the five lifeboats and constructed a make-shift raft to take most of the remaining crew members. With totally inadequate provisions, no oars, and with barely sufficient standing room for the 150 men, he set the raft adrift after finding that it was too heavy to be towed behind the lifeboats. Within a few days of their ordeal the men began fighting for the little food that remained. Many were hacked to death or thrown overboard, and when the food ran out some of them resorted to cannibalism. Rescue was purely by chance thirteen days later, by which time only fifteen men were still living, five of whom died soon afterwards.

xxxxxAs for De Chaumareys, he was court-martialled on a number of counts. He was acquitted of deserting his ship and abandoning the raft, but found guilty of incompetence and of leaving his ship before some of the passengers. This carried the death penalty, but he was only sentenced to three years imprisonment. In the meantime he sent a party to find the Medusa, thinking there was still gold aboard, but all that was found were three very sick survivors of the 17 men who had chosen to remain with the ship. In 1980 a team of divers went to the Arguin Bank and identified the remains of the ship, some 30 miles off the coast of Mauritania.

xxxxxIn the United States the pioneer of romantic art was the painter Washington Allston (1779-1843). His historical scenes and landscapes were imaginative works in which he made good use of light and colour to create fantasy, drama and scenes of strange beauty. His major works were The Deluge, Rising of a Thunderstorm at Sea (both in 1804), Moonlit Landscape of 1819, and his vast, unfinished Belshazzar’s Feast. He studied in London with Benjamin West during the early 1800s, and met the English poet Samuel Taylor Coleridge during a stay in Italy.

xxxxxThe beginning of Romantic art in the United States owes much to the painter Washington Allston. Born near Georgetown, South Carolina in 1779, he graduated from Harvard University in 1800, and then travelled to Europe. He studied with Benjamin West at the Royal Academy in London over the next three years, and then continued his studies in France and Italy. As a romantic, his historical scenes - such as The Deluge and his vast, unfinished work Belshazzar’s Feast - are full of imagination and fantasy. His powerful Rising of a Thunderstorm at Sea in 1804 and (in sharp contrast) his serene, haunting Moonlit Landscape, produced in 1819 (both illustrated below), testify to his skill in interpreting the varying moods of nature. His work is especially remarkable for the way in which he handled light and colour in the creation of atmosphere.

xxxxxHe worked for seven years in London before returning to Boston in 1818, where he became regarded as the pioneer of the American romantic movement. He eventually settled in Cambridgeport, Massachusetts in 1830, and it was there that he died in 1843. Apart from painting, Allston also produced a book of poems, and he was a close friend of the English poet Samuel Taylor Coleridge during his stay in Italy.