xxxxxAs we have seen, the ancient Greek temple called The Parthenon, a magnificent example of Doric architecture, was virtually destroyed when, following the Second Battle of Mohacs in 1687 (J2), the Venetians invaded Greece and bombarded the city of Athens. It was the remains of this building which attracted the Earl of Elgin when he became ambassador to the Ottoman Empire in 1799. Fearing that the Turks, then in charge of Athens, would break up the ruined temple for building material, he obtained their permission to take away some of the sculptures. Over the years 1802 to 1812 he shipped to England some 50 pieces, mainly from the frieze of the ancient temple. On his return to England in 1806 many, including the poet Lord Byron, accused him of theft and vandalism, but he published a paper to defend his actions, and a parliamentary enquiry vindicated him. In 1816 the British government bought the sculptures, by then known as the “Elgin Marbles”, and they have been displayed in the British Museum, London, ever since. 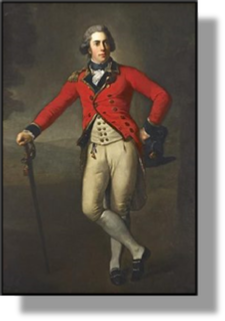 xxxxxIt was in 1802 that shipment began to England of a large collection of ancient Greek sculptures and architectural detail. Over the next ten years something like 50 pieces, packed in crates, were transported to England, and by 1812 all had arrived safely. One ship, HMS Mentor, did sink off the Greek island of Cythera in 1804, but its precious cargo was recovered. For the most part these large fragments were taken from the ruin that was once the Temple of Athena Parthenos (The Parthenon) and which, from its position on the Acropolis, had dominated the city of Athens for over 2,000 years.

xxxxxAs we have seen, this magnificent example of Doric architecture from the 5th century BC was almost blown to pieces when, following the defeat of the Ottoman Turks at the Second Battle of Mohacs in 1687 (J2), the Venetians had invaded Greece and bombarded the city of Athens. When the Turks, who ruled over Greece at this time, re-occupied the capital, they were perfectly willing to sell off bits of the ruined building to any wealthy European who had the ready cash to pay for them!

xxxxxThe transhipment of these ancient artworks was arranged by the then British ambassador to the Ottoman Empire, Thomas Bruce, the 7th Earl of Elgin (1766-1841) (illustrated above). A man with a keen interest in classical art, he began earmarking certain valuable pieces soon after taking up his post in Constantinople in 1799. Learning, so he later maintained, that a number of ancient Greek buildings, including the Parthenon, were to be broken up in order to provide building material, he then negotiated with the Turks and 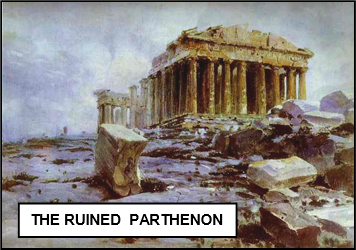 secured permission not only to measure and sketch significant pieces of sculpture and architectural detail, but also “to take away any pieces of stone with old inscriptions or figures thereon”. Needless to say, he jumped at the chance.

xxxxxThe vast collection of treasures which he selected - and which came to be known as the “Elgin Marbles” - comprised mainly of ruined remains from the Parthenon, notably friezes, cornice and architrave from the entablature (the upper part of the building), together with pediment sculptures and a vast amount of architectural details. But he also took a caryatid (a pillar in the shape of a draped female figure), and an amount of cornice and architrave from the Erectheum, the most venerated of the Acropolis temples. In addition, various other precious pieces were taken from the city of Athens itself and a number of other sites, including Attica.

xxxxxElgin left for home in 1803, but he was detained in France for three years following the resumption of the Napoleonic Wars, and he did not reach England until 1806. The marbles were put on display the following year, and it was then that he found himself in the eye of a storm. There were many people, the poet Lord Byron among them, who roundly condemned him for his dishonesty and vandalism. Others accused him of theft, and some even questioned the value of his ill-gotten gains. A select committee of Parliament was established to evaluate the pieces and consider the possibility of purchasing them for the nation. In the meantime in 1810 Elgin published a paper defending his judgement and consequent actions. He had acquired the sculptures, he maintained, because the 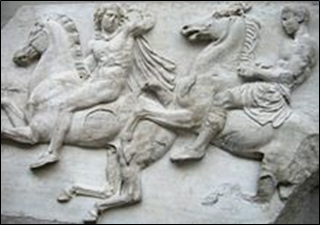 Turks were totally indifferent to their fate a 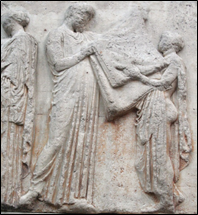 nd he genuinely feared that such priceless treasures would have been destroyed and lost for ever. Then the Parliamentary committee came out in his favour, and this tended to silence some of the criticism. However, the controversy rumbled on late into the 20th century, and to this day has not really gone away.

xxxxxEventually, in 1816, after much persuasion by Elgin, the British government - satisfied as to the worth of these “marbles” - agreed to purchase all of them for £35,000 and have them exhibited in the British Museum, London. They remain there today, though over a number of years, and particularly during the late 20th century, the Greek government has requested their return to Athens, their “rightful place”.

xxxxxThe arrival of the Elgin Marbles in London, together with the publication of Antiquities of Athens, produced in four volumes by the English architects Nicholas Revett and James Stuart, served in particular to awaken an interest in the architectural heritage of Greece as opposed to Rome. A number of British architects, such as John Nash, were influenced by this “Greek Revival”, and the romantic poets were clearly inspired by all things Greek. Shown here - and above - are some of the pieces taken from the frieze.

The Earl of Elgin

xxxxxIncidentally, while Lord Byron lamented that great works of Greek antiquity had been “defac’d by British hands”, the poet John Keats wrote a sonnet to celebrate their arrival, and the German poet Johann Wolfgang von Goethe hailed their acquisition as “the beginning of a new age for Great Art”.

xxxxxThe Italian Antonio Canova (1757-1822) was one the sculptors who came to London in 1815 to give his opinion on the value of the Elgin Marbles. The foremost neo-classical sculptor of his day, his verdict played a large part in persuading the British government to buy them. He became interested in classical architecture during visits to Rome and the sites of Pompeii and Herculaneum and, on moving to Rome in 1781, became famed throughout Europe for his marble busts, classical tombs, monuments and figures. Notable are his tombs for the popes Clement III and IV, his sculptures Theseus and the Dead Minotaur and Perseus with Medusa’s Head, and his sensuous figure of Napoleon’s sister Maria Paulina Borghese, portrayed as Venus in about 1807. He worked in Paris from 1802, and produced a bust, an equestrian statue and two large standing figures of the emperor. After the fall of Napoleon he was sent to Paris to retrieve art treasures taken from Italy by the French. A respected and admired man, his place as the leading exponent of neo-classicism was taken by the brilliant Danish sculptor Bertel Thorvaldsen. 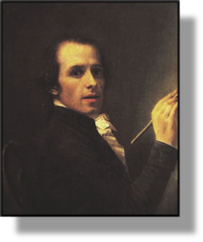 xxxxxOne of the sculptors who inspected the Elgin Marbles on behalf of the British government was the Italian master Antonio Canova (1757-1822). He travelled to London in 1815 and, unlike some of his fellow artists, at once saw the value of this ancient artwork. Regarded as the foremost neo-classical sculptor of his time, his verdict played a large part in persuading the British government to purchase the pieces the following year.

xxxxxCanova was born 1757 and, losing his parents at an early age, was brought up by his grandfather Pasino, a stonemason in Possagno, near Venice. He later studied at the Venice Academy and by the mid 1770s, having set up his own studio, had gained a wide reputation as a portraitist, receiving commissions from nobility in Venice, Rome and as far away as London. His early statutory, such as the highly realistic Daedalus and Icarus was in the baroque manner, but on visits to Rome in 1779 and 1780 he became caught up in the revival movement in Greek and Roman art. He mixed with the classical artists of the day, and went on to visit the ancient ruins then being uncovered at Pompeii and Herculaneum. 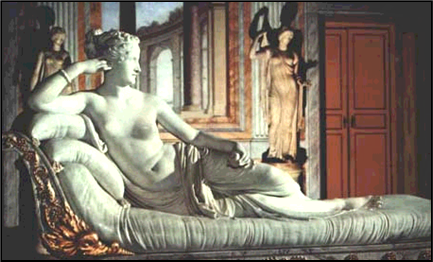 xxxxxIn 1781 he moved to Rome and, being of a congenial disposition, soon became a well-known figure in the city’s artistic circle. It was then that he abandoned his earlier, more natural style and quickly succeeded in capturing the severe, pure lines of classical art, winning immediate fame with his Theseus and the Dead Minotaur, completed in 1782. There followed a flood of commissions which established him as the leading neo-classical artist of his day. His work over the next twenty five years included the tombs of Clement III and IV, a number of powerful pieces, such as Perseus with Medusa’s Head and The Pugilists, and marble portrait busts of nobles, kings and emperors - including statues of Napoleon himself. And there was in his cool, polished statutory a sensuous element, as was to be seen in his Cupid and Psyche, The Three Graces (illustrated below) and, above all, his figure of Napoleon’s sister Maria Paulina Borghese, portrayed as the goddess Venus Victrix, reclining naked but lightly draped on a couch (here illustrated).

xxxxxSome of this work was done outside of Rome. In 1798, following the French invasion of the city, Canova worked for a while in Venice and then, in 1802 was invited to Paris by Napoleon. Here he became court sculptor, and over the next ten years produced a bust, an equestrian statue and, in 1811, two huge heroic nudes of the emperor in classical pose. 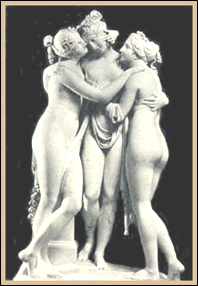 xxxxxAfter the fall of Napoleon, Canova was assigned the task of going to Paris and retrieving all the art treasures that the French emperor had taken from Italy. For his part in this work he was created the Marquess d’Ischia by the Pope. It was after this that he went to London to assess the value of the Elgin Marbles, and while there he was commissioned by the Prince Regent to produce a life-size portrayal of Venus and Mars (now in Buckingham Palace, London). One of his last works was a monument to George Washington in Roman attire. It was erected in the State House at Raleigh, North Carolina, in 1821, but was destroyed by fire nine years later. A copy of the work, based on the original plaster model, can now be seen in Raleigh’s Museum of History, the work of the Italian sculptor Romano Vio in 1970.

xxxxxIllustrated here are three of his well-known works: Crouching Lion, Cupid and Psyche (detail), and Napoleon.

xxxxxCanova died in Venice in 1822 and was buried at Possagno in a temple he had designed in the form of the Pantheon in Rome. A much respected and admired man, his place as the leading exponent of neo-classicism was taken by the accomplished Danish sculptor Bertel Thorvaldsen.