xxxxxFollowing the outbreak of the Napoleonic Wars in 1803, Napoleon was faced with the Third Coalition, made up of Britain, Austria, Russia and Sweden. In 1805 Austria, without waiting to join up with the Russian army, invaded Bavaria, secure in the knowledge that Napoleon’s major force was stationed at Boulogne, preparing to invade England. However, by a series of forced marches, Napoleon led his Grand Army into Germany and, taking the Austrian army by surprise, drove it into the city of Ulm in October 1805. Here, surrounded, outnumbered and with the Russians still some 100 miles distant, its commander, General Karl Mack, was forced to surrender. As we shall see, this victory paved the way for the French occupation of Vienna, and Napoleon’s triumph at the Battle of Austerlitz in December 1805.

xxxxxAs we have seen, the period known as the Napoleonic Wars began in 1803. A British declaration of war against France in May of that year put an end to the fourteen troubled months of peace which followed the Treaty of Amiens in 1802. A resumption of the war between the sea-based power of Britain and the land-based power of France - each feeling acutely threatened by the other - was inevitable. 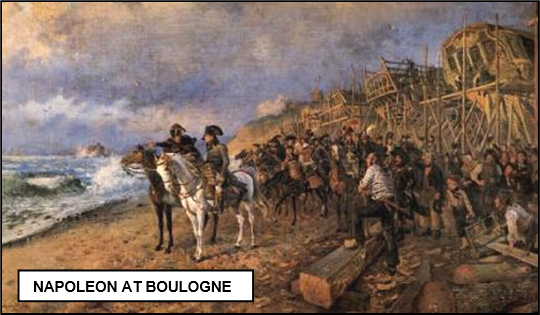 xxxxxAs a necessary opening gambit, Napoleon massed an army of some 170,000 men at Boulogne, threatening an invasion of his island enemy. But once again, Britain was not intending to stand alone. As early as April, in fact, the British government had negotiated the Third Coalition against France, gaining the support of Austria, Russia and Sweden. As on previous occasions, this was to ensure that others fought the continental land battles and, by so doing, kept the enemy at bay. But when the Austrians took the field against the French in 1805, their army was not in good shape. Furthermore, fully aware that the bulk of Napoleon’s forces were at Boulogne, poised for an invasion of England, they assumed that time was on their side, and that the Russian army would unite with theirs long before the French arrived on the scene.

xxxxxThis assumption proved to be a serious miscalculation, ignoring as it did the hallmarks of Napoleon’s military strategy - speed and surprise. By a series of forced marches, the French Emperor took his Grand Army of 200,000 swiftly across Europe, leading it not into Italy, as was expected - and where the bulk of the Habsburg forces had mustered - but into Germany. In the meantime the Austrian general Karl Mack, without waiting for his Russian ally, had invaded Bavaria with 72,000 troops. For Napoleon it was an opportunity he had created for himself, and one that he did not miss. He crossed 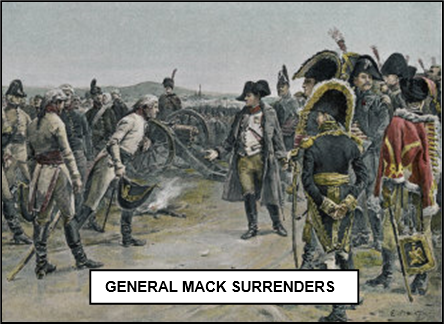 the Rhine north of the Black Forest, moved south, and having crossed the Danube, swung his army behind the Austrian force, taking it almost completely by surprise in October 1805. Mack attempted to reverse out of danger, but the French moved around to engage his flank and, after a series of battles in the area of Ulm and Gunzburg, drove the majority of his army into the city of Ulm. There three days later, totally surrounded, heavily outnumbered, and with the Russians still 100 miles distant, he was forced to surrender. Some 20,000 men managed to escape the net, about 10,000 were killed or wounded, and the remainder were taken prisoner.

xxxxxThe Battle of Ulm was a humiliation for Austria and a strategic triumph for Napoleon. And worse was to come for the Third Coalition. Napoleon entered Vienna in November 1805 and then, moved into Moravia. Here, as we shall see, he met up with a combined force - the invading Russians and what was left of the Austrian army - and gained a resounding victory at the Battle of Austerlitz in December 1805.

xxxxxIncidentally, having to withdraw his troops from Boulogne in order take on the Austrians was a bitter disappointment to Napoleon. He had been keen to invade England, and as late as August 1805 had written to his admirals: “Come into the Channel, bring our united fleet, and England is ours. If you are only here for 24 hours all will be over, and six centuries of shame and insult will be avenged”.