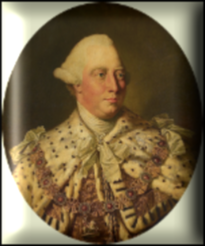 The loss of the American colonies, confirmed by the Peace of Paris in 1783, was a humiliation for the British government and, in equal measure, for the British king. Though not, perhaps, the autocratic monarch his opponents (particularly the Whigs) would have him painted, George III was nevertheless a powerful force in politics in the first twenty years of his reign. Via his parliamentary “friends”, led by his chief minister Lord North, he played no small part in attempting to bring the colonists to heel. He opposed American independence at every step and fully endorsed, if he did not initiate, the punitive measures which eventually led to the rebellion. (The portrait is by the German artist Johann Zoffany).

After 1783, however, the majority of his “friends” in the Commons, like old soldiers, simply faded away. Indeed, that year marks a turning point in his reign and, in some respects, in the history of parliamentary government in Britain. Whilst he clearly retained some influence in political affairs, his blatant attempts to reassert royal authority by one means or another were clearly at an end. North’s resignation was followed by two short-lived ministries, and an unlikely coalition between Charles Fox and Lord North, but in 1785 the king forced the dismissal of both men and appointed the young William Pitt as his first minister. Under him government was destined to return to a parliamentary system more in keeping with that developed under the king’s two predecessors George I and George II. Indeed, it was during the long premiership of Pitt, a most able politician, that cabinet government together with its principle of corporate responsibility, really took root. This was to impose a permanent restriction upon royal authority within a constitutional monarchy.

And another and, as it happens, sad reason for a decline in the king’s authority, was the worsening of his mental instability. First noticed in 1756, his bouts of madness became more frequent and more serious from 1788, possibly triggered by deep anxiety over the failure of his earlier policies and the waywardness of George, his son and heir. In that year an acute attack made him incapable of carrying out his duties, and a political showdown ensued, wherein Charles Fox prepared to place the Prince of Wales on the throne. The crisis was averted by the king’s sudden and unexpected recovery the following year, but for the next ten years George played little part in the day-to-day affairs of state. And, as we shall see (G3c), his condition became progressively worse in the opening years of the new century, and he was eventually removed from office.

1801, however, his disability did not prevent him from entering once more into the political arena, this time in respect of Ireland. Following a rebellion in favour of Irish independence, eventually crushed at the Battle of Vinegar Hill in 1798, Pitt came to the conclusion that a merging of the two parliaments was the most promising means of preventing further trouble. He steered the Act of Union through parliament in 1801, but his aim to give full civil rights to Roman Catholics - which he rightly saw as a necessary corollary - was thwarted by the king. He used all his influence to throw out this measure, and a golden opportunity to promote Anglo-Irish conciliation was lost. George argued that this ran counter to his coronation oath (binding him to maintain the rights and privileges of the Church of England), but this is perhaps another example where he showed a serious lack of political judgment. Pitt felt honour bound to resign, but he returned to office in 1804, having agreed to drop the emancipation issue.

Almost the entire twenty years of this middle period of George III’s reign was dominated by the French Revolution and the Revolutionary Wars it spawned. At first there was some marked support in Britain for the aspirations of the French revolutionaries, and security at home had to be tightened, but following the execution of Louis XVI in 1793, the Reign of Terror, and the beginning of the Revolutionary Wars, the king became, in fact, a symbol of national resistance. Already an object of sympathy on account of his illness, and the unseemly behaviour of his son, the Prince of Wales, the old king now became a father figure and the guardian of the country’s freedom. And his prestige, enhanced by Nelson’s victories at the Battles of the Nile and Copenhagen, was to reach greater heights during the triumphs achieved by his countrymen during the Napoleonic Wars (G3c).

But while the French Revolution dominated Western Europe, in the east Poland was swallowed up by Russia, Austria and Prussia. Further afield the British were consolidating their hold on India and Canada, and the United States was putting to the test its new constitution, led by their first President, George Washington. And on the other side of the world, a small penal settlement, established along the coast near Botany Bay, marked the opening up of the vast land known as Australia.

The Treaty of Amiens of 1802 brought peace to a troubled Europe, but it was merely a breathing space. Napoleon, First Consul of France, having come to power in 1799, was now bent on spreading his own, personal revolution across the continent. As we shall see, the Napoleonic Wars were destined to dwarf the Revolutionary Wars both in scale and violence.

Incidentally, having recovered from his serious bout of madness in 1789, the king took his first bathe at Weymouth in Dorset. He was given a huge welcome, and during his paddle in the sea the local town band stood in the water and played the national anthem. It was his eldest son George, Prince of Wales, who made visits to the seaside a popular outing, and bathing then became a national pastime.