xxxxxAll three partitions of Poland divided the Polish kingdom among its powerful neighbours, Russia, Prussia and Austria. Poland had been in decline since the death of its King, Sigismund II Augustus, in 1572, but the emergence of Russia as a great power in the early years of the 18th century hastened its fall. Bent on advancing westward, the Russians came to dominate Poland via the Great Northern War (1702-1721) (AN), and the War of the Polish Succession (1733-1735) (G2). In the First Partition of 1772 they joined with the Prussians and Austrians in seizing large areas of Polish territory. Twenty years later, fearing that Poland was making a recovery, they invaded the country once again, and in 1793 arranged a Second Partition together with Prussia. In 1794 the Polish leader Kosciuszko led a national revolt to recover the lost land, but this was crushed in 1795 and led to the Third Partition by which Russia, Prussia and Austria occupied what remained of the Polish state. It was not restored as a nation until 1918. The bitter rivalry which the second and third partitions caused between Prussia and Austria prevented their acting together against Revolutionary France at the very time when the French were waging war in Western Europe and advancing their northern boundary to the Rhine.

xxxxxIn 1795 Poland ceased to be a state. In November of that year the Polish king, Stanislaw II, abdicated, and the country was finally partitioned and swallowed up by its powerful neighbours, Russia, Austria and Prussia. It was not restored as a nation until 1918, over 120 years later.

xxxxxThe decline of Poland as a powerful and prosperous nation goes back to 1572 with the death of Sigismund II Augustus (illustrated), the last of the Jagiellon dynasty. The Polish nobility then seized power, and for the next two centuries the country went into political and economic decline, devastated and reduced in size by a series of disastrous wars with its neighbours - notably Sweden and Russia - and with the Ottoman Turks. In 1683 the Polish army, combined with the Germans, did win a significant victory over the Turks at the gates of Vienna - averting a serious threat to Christendom - but any hopes of a revival were short lived. By the early 18th century the Russians (under their leader Peter the Great) were actively seeking to expand westward at the expense of Poland, using bribery as well as military might to get their way.

xxxxxTheir opportunity came during the Great Northern War when, as we have seen (1702 AN), the young Charles XII of Sweden, having defeated the Danes and Russians, invaded Poland in 1704 and, deposing the Polish king, Augustus II, replaced him with his own candidate, the Polish nobleman Stanislaw Leszczynski. However, when, three years later, he invaded Russia and lost the Battle of Poltava in 1709, the Russians seized their chance. They quickly advanced into Poland and restored Augustus to the throne, thereby gaining virtual control over Polish affairs.

xxxxxAnd their hold was further strengthened when, on the death of Augustus II in 1733, Stanislaw attempted to make a comeback in what came to be known as the War of the Polish Succession (1733 G2). With the support of the majority of Polish nobles and his son-in-law Louis XV of France, he was elected as the new monarch. But Russia, supported by Austria, had other ideas. A large Russian army invaded Poland, drove out Stanislaw, and in 1734 named Augustus III, son of Augustus II, as the Polish king. The Treaty of Vienna, which brought the war to an end, confirmed the settlement imposed by Russia and, in effect, recognised the impotence to which Poland had been reduced. 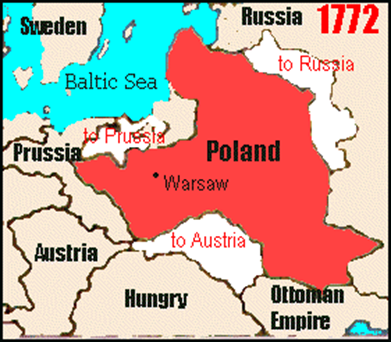 xxxxxSome attempt was then made by the Polish nobility to revive their nation’s fortunes, but with the death of Augustus III in 1763, Russia, now in the hands of Catherine the Great, again intervened. Her troops invaded Poland in 1764 and ensured the election of Stanislas II Augustus, one of her lovers and a convenient pawn to ensure the continuation of Russian domination in the affairs of her ailing neighbour. Then in 1772 came the First Partition of Poland, a direct result, in fact of the success of Catherine’s campaign against the Ottoman Turks in the south, begun in 1768. Austria, led by Marie Theresa, was so alarmed at the advance of Russian forces into the Danubian principalities that her chancellor, Kaunitz, at one time threatened to assist the Turks. This, in its turn, alarmed the Prussian leader Frederick the Great. In order to avoid such a dangerous escalation of the conflict, he suggested to the would-be contestants that there were easier gains to be made at the expense of Poland in the heart of Europe.

xxxxxThus it was that by a treaty concluded at St. Petersburg in August 1772, the three eastern European powers of Russia, Prussia and Austria, each agreed to help themselves to a slice of Poland. The Polish parliament, duly bribed, gave its consent, and lost something like a quarter of its land and about half of its population. Russia gained a large area of eastern Poland; Prussia received the northern region of Wielkopolska together with most of the valuable province of Royal Prussia; and Austria acquired the three areas, Galicia, southern Malopolska and western Podolia. 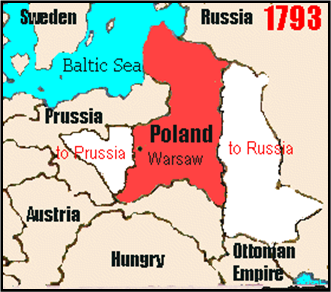 xxxxxThe Second Partition was to come twenty years later. What remained of Poland in 1772 was named the Polish Commonwealth and, with the aid of Prussia, a genuine attempt was made to introduce political reforms, resulting in the adoption of a new and more liberal constitution in May 1791. A year later, however, this led to a secret agreement between the Confederacy of Targowica (a party of Polish nobles opposed to reform) and Catherine the Great. The Confederacy, assisted by Russian troops, then launched an attack upon the Polish government. Abandoned by Prussia, it was forced to capitulate, and Poland was again up for grabs. The Russians occupied all of eastern Poland and, early in 1793, the Prussians took over much of the western half. This second partition, ratified in September 1793, further reduced Poland by two thirds. 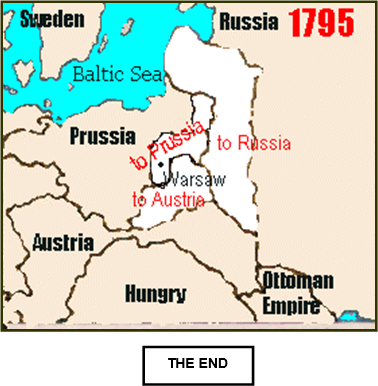 xxxxxThe Third Partition followed soon afterwards, but not without a struggle. Not yet defeated, in 1794 the Poles made a gallant attempt to recover their lost territories. Under the leadership of their national hero Tadeusz Koshciuszko, they won a number of victories against the Russians and were successful in driving them out of much of the land they had occupied. But with the intervention of both Prussia and Austria, the Poles were overwhelmed. In the October the Russians won a decisive victory at Maciejowice, and forced the surrender of Warsaw and the revolutionary army. In a series of treaties, beginning in 1795, Russia was granted about half of what remained of Poland, and the other half was divided between Prussia and Austria. The proud state of Poland no longer existed, and its people were to remain under foreign control for close on 125 years.

xxxxxThe fierce wrangling which took place over the final partitioning of Poland had serious implications as far as the French Revolutionary Wars were concerned, then raging over Western Europe. The preoccupation of Austria and Prussia over the dismemberment of Poland, and the bitter rivalry this engendered, meant that co-operation between the two nations was out of the question at the very time when the French were on the march, extending their northern boundary up to the Rhine. Indeed, at the Treaty of Basle in April 1795, Frederick William II of Prussia was even willing to come to terms with the French in order to devote all his time and energy to squabbling over what remained of Poland.