THE ACT OF UNION UNITES GREAT BRITAIN AND IRELAND 1801  (G3b)

xxxxxThe rebellion of 1798 convinced the British government that the solution to the Irish problem was to amalgamate the British and Irish Parliaments, thereby putting an end to Ireland’s separate institutions. By a combination of bribery and corruption, the Irish parliament was coerced into voting itself out of existence, and the Act of Union came into force in January 1801. Once established, however, George III intervened, and refused to give his consent to Roman Catholic emancipation, an essential ingredient of the settlement. Another rising occurred in 1803, but it was not until 1829 (G4), that a movement led by Daniel O’Connell eventually gained equal rights for the Roman Catholics. Political unrest and economic slump continued, however, - exacerbated by the Great Potato Famine of 1845 (Va) -, and eventually led to a partial breakdown of the union in 1921, when the Irish Free State was established. 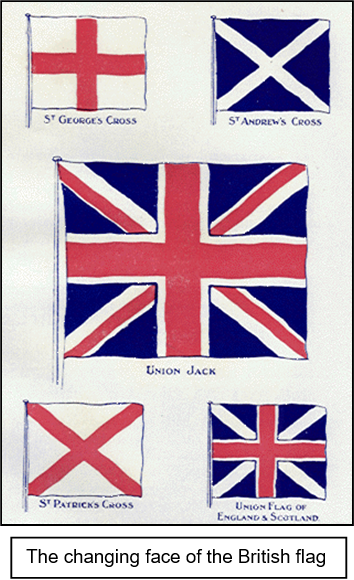 xxxxxThe Irish rebellion of 1798, though failing in its bid for independence, convinced the British government, led by William Pitt, that a change of policy was needed towards Ireland. The solution was seen as an amalgamation of the Irish and British parliaments, thus merging the two kingdoms into the United Kingdom, and putting an end to Ireland’s separate political institutions and, hopefully, the troubles that went with them.

xxxxxSuch a dramatic measure was at once opposed by the Irish parliament but, on the premise (as the politician Robert Walpole once said) that “every man has his price”, the British government persevered. The first bill of union having been rejected early in 1800, it embarked on a broad programme of barely-disguised bribery. Where necessary, votes were bought for titles, government offices or straight cash-in-the-hand. It is estimated that well over one million pounds was spent on “compensation for disturbance”! Thus when the bill came up a second time at the end of March 1800, the Irish parliament voted itself out of existence, despite strong pleas not to do so by the ageing Henry Grattan, the man who had so successfully squeezed concessions out of the British government in 1780 (G3a).

xxxxxThe Act of Union of Britain and Ireland came into effect on the first day of January 1801. By its terms Ireland was to return 100 members to the House of Commons at Westminster, and 32 peers and 4 bishops were to be elected as life-peers in the House of Lords. At the same time, the Church of Ireland became part of the Church of England. 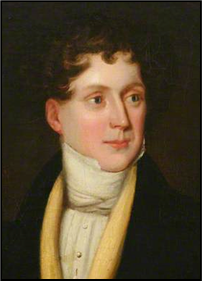 xxxxxAtxground level the union was far from popular in Ireland. Indeed, it had hardly been established when, in July 1803, an uprising against English rule broke out, led by the Irish patriot Robert Emmet (1778-1803) (illustrated). Badly organised, the insurrection was quickly suppressed, and cost Emmet his life on the gallows, but it showed the underlying opposition to the merger. Furthermore, despite a promise by Pitt, after the union was in place George III personally intervened and refused to give his consent to catholic emancipation. This only served to widen the religious divide. Little wonder that the Catholics remained rebellious and the Protestants kept government in their own hands. Nor did the union do anything to ease the economic decline into which the country was fast sliding.

xxxxxAs we shall see, the struggle for religious freedom and full independence (not sought by all) was to be a long one. Catholic Emancipation, led by the dynamic Daniel O’Connell, was not granted until 1829 (G4), and it was not until 1921 that the union was partially disbanded and the Irish Free State was established. Between these two dates, the economy slumped further, and virtually collapsed with the Great Potato Famine of 1845 (Va), and the mass emigration that followed.

Emmet: attributed to the British artist James Petrie (c1745-1819) – The Hunterian Museum, The Royal College of Surgeons of England, London.

xxxxxFollowing the union with Ireland in 1801 the Union Jack became the nation’s new flag. This was made up of the red cross of St. George of England, the white cross on a blue background of St. Andrew of Scotland, and the diagonal red cross of St. Patrick of Ireland.

xxxxxFollowingxthe union with Ireland in 1801, the term United Kingdom became official, and the Union Jack became the nation’s new flag. The earliest form of the flag to represent Great Britain, the “Union Flag or “Great Union” (illustrated on the left), was devised in 1606 soon after James V1 of Scotland came to the English throne as James I and united the two nations. It superimposed the red cross of St. George of England upon the white cross and blue background of the flag of St. Andrew of Scotland. Because in heraldry red on blue is frowned upon, the red cross of England was given a white border, in keeping with its own background colour.

xxxxxDuring the Commonwealth period (1649-60) Oliver Cromwell included Ireland by adding an Irish harp to the centre of the flag (illustrated right), but this was removed when Charles II was restored to the throne in 1660. When the union with Ireland came about in 1801, the Irish flag, the diagonal red cross of St. Patrick (illustrated above), was given a white border and combined with the Union Flag. The new flag, representing the United Kingdom, later came to be known as the Union Jack, perhaps to distinguish it from the earlier Union Flag. Fittingly for a seafaring nation, the term “jack” is a nautical term applied to a small flag when flown on the jackstaff of a warship.