xxxxxIn 1796 the English physician Edward Jenner proved that an inoculation of cowpox provided an immunity from smallpox. He discovered this after noticing that milkmaids who had caught cowpox never contracted smallpox - then a serious killer-disease. Two years later he set out his findings in his paper An Inquiry into the Causes and Effects of the Variolae Vaccinae, A Disease Known by the Name of Cow Pox. His treatment, which he called “vaccination”, met with some problems and opposition at first, but was eventually adopted successfully throughout Europe and North America. This discovery opened up the possibility of employing immunisation to combat a range of other diseases - a branch of medical science which was developed by the French chemist Louis Pasteur in the late 19th century. 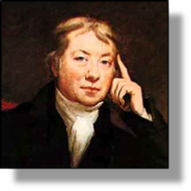 xxxxxThe English physician Edward Jenner was born in Berkeley, Gloucestershire, the son of a clergyman. Inx1770, after spending eight years as a surgeon’s apprentice, he went to study at St. George’s Hospital, London, working under John Hunter (1728-1793), the distinguished Scottish surgeon who did so much to advance medical education. From him he learnt the vital importance of clinical observation, and the need to experiment. He returned to Berkeley in 1773, and soon set up a highly successful practice.

xxxxxIt was in 1788, during a local epidemic of smallpox - a serious killer-disease in those days - that he first noticed that milkmaids who had contracted cowpox never went down with smallpox. In 1796 he performed his first experimental inoculation against smallpox (illustrated), and two 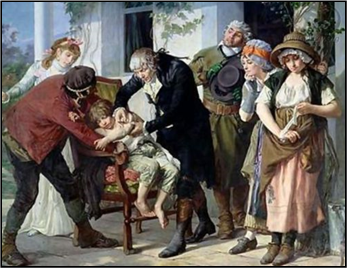 years later published details of his treatment in his An Inquiry into the Causes and Effects of the Variolae Vaccinae, A Disease Known by the Name of Cow Pox. In this paper he instanced the case, among others, of an eight-year-old boy who, having been inoculated with cowpox (a relatively harmless disease) had gained immunity from smallpox by creating anti-bodies in his bloodstream. He termed the treatment “vaccination” from the Latin word for cowpox, vaccinia, and, after some initial scepticism and practical difficulties, the procedure came to be adopted throughout Europe and North America - there widely employed by the efforts of the American physician Benjamin Waterhouse (1754-1846).

xxxxxHis discovery was a breakthrough of immense value to medicine, introducing an effective cure against the deadly smallpox, and opening up the possibility of employing immunisation to combat a range of other diseases - a branch of medical science which was developed by the French chemist Louis Pasteur in the late 19th century. In fact, however, though Jenner pioneered vaccination clinically, the idea behind it had been known for some time. As early as 1721, the English writer Lady Mary Wortley Montagu (1689-1762) - whose beauty had been marred by smallpox when young - had spoken of seeing the value of this treatment when living in Turkey as the wife of the British ambassador. There, however, patients were inoculated with a mild form of smallpox itself, and this clearly carried a risk of introducing the disease rather than providing immunity against it.

xxxxxThexDutch-born London physician and scientist Jan Ingenhousz (1730-1799), best known for his discovery of the process of photosynthesis, became an early proponent of this method at the city’s Foundling Hospital. Known as “variolation” (because it used live virus taken from patients suffering from a mild attack of the disease), in 1768 he was sent to Vienna by George III to inoculate the family members of the Austrian empress Maria Theresa.

xxxxxJenner himself made no money from his discovery. Indeed, he gave so much time to promoting vaccination, providing it free for the London poor, that his private practice suffered as a consequence. However, in 1804 Parliament granted him the sum of £10,000, and paid a further £20,000 four years later. He retired from public life following the death of his wife in 1815. 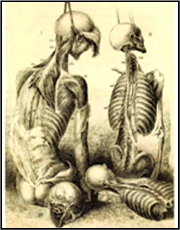 xxxxxIncidentally, another outstanding physician at this time was the Scottish anatomist John Bell (1763-1820). In 1790 he opened his own school of anatomy in Edinburgh, where he came to be regarded as the founder of surgical anatomy. His works included Anatomy of the Human Body, published in 1793, and his Discourse on the Nature and Cure of Wounds, produced two years later. His Principles of Surgery was completed in 1808. As we shall see, his younger brother, Charles Bell, was also a physician. He treated the wounded from the Battles of Corunna and Waterloo, and became famous for the advancements he made in neurology, the study of the nervous system. 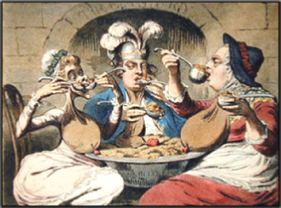 xxxxxTwo of his celebrated cartoons was The Plum Pudding in Danger (illustrated above), showing William Pitt and Napoleon Bonaparte carving up the world, and a particularly cruel print depicting the gluttony of George III, his wife, Queen Charlotte, and their eldest son, the wayward Prince of Wales, feeding off John Bull’s blood. Other well-known plates are The Anti-Saccharites, Temperance Enjoying a Frugal Meal, and King George and his wife Frying Sprats and Toasting Muffins. His swift and powerful denunciation of the French Revolution, following on The Terror and the execution of Louis XVI, did much to sway public opinion against such excesses. The sans-culottes were depicted as depraved beasts, and he produced a series of prints predicting the horrors which would befall the country if the French managed to invade England and put an end to the British way of life.

xxxxxAnother distinguished physician in Jenner’s time was the Frenchman Xavier Bichat (1771-1802). He is generally regarded as the founder of histology - the study of organic tissue. He introduced the term “tissue” and identified 21 different types in the human body. His findings were set out in two works published in 1800, Treatise on Membranes and Physiological Researches on Life and Death, and in the two volumes of his General Anatomy, produced in 1801. 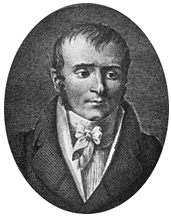 xxxxxAnother distinguished physician in Jenner’s time was the Frenchman Xavier Bichat (1771-1802). In 1800 he published his Traité des membranes (Treatise on Membranes) in which he studied the structure of the various organs of the body, and introduced the term “tissue”, identifying 21 different types in the human body, and recognising three of the four principal tissues - muscle, nerve and connective. He also went on to record the post mortem changes made in tissue by various diseases, publishing his findings in his Recherches physiologiques sur la vie et la mort (Physiological Researches on Life and Death). For his research in this field he became known as the founder of histology - the study of organic tissue (from histos, the Greek word for tissue). The first two volumes of his final work, Anatomie Générale (General Anatomy), were published in 1801.

xxxxxHexwas born at Thoirette in the French Jura and studied at Lyon before going to Paris. There he assisted Pierre-Joseph Desault (1744-1795) at the Hôtel-Dieu hospital, and when this accomplished surgeon and anatomist died in 1795, he completed the final volume of his Journal de chirurgie (Journal on Surgery). Napoleon was impressed with the work of these two physicians, and ordered that the busts of both men be placed in the Hotel-Dieu.

xxxxxIncidentally, It was around this time, in 1793, that another French physician, Philippe Pinel (1745-1825), was appointed head of the mental institute for men at Bicètre, Paris. He revolted against the cruelty and neglect which the inmates were suffering, and introduced a programme of reform, banning chains and shackles, encouraging patients to discuss their personal problems, and providing a programme of useful activities. Two years later he did the same for the female asylum at Salpêtrière in the city.

xxxxxThe idea of vaccination was not without its critics. The English caricaturist James Gillray (1757-1815), for example, produced a savage cartoon in 1802 suggesting that those inoculated would begin to act like cows. Gillray , an engraver by trade, was influenced by the work of the artist William Hogarth, and turned his hand to cartoons in the 1770s. His savage, biting attacks upon the follies of the day earned him a wide reputation. At first his main targets were politicians and the royal family but, with the outbreak of the French Revolution, he turned his attack upon the French, and Napoleon in particular. He produced over a thousand coloured etchings, many noted for the exaggerated size of his victim’s physical features. 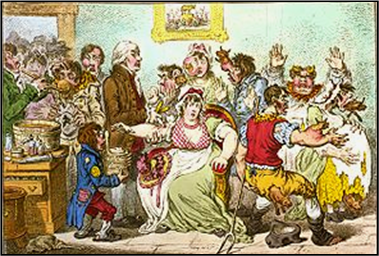 xxxxxBut, as noted, the idea of vaccination was not without its critics. In 1802, for example, the brilliant English caricaturist James Gillray (1757-1815) produced a savage cartoon (illustrated) suggesting that those who had been inoculated began to look and act like cows. Gillray began his working life as an engraver, but in the mid-1770s, influenced by the works of English artist William Hogarth, he began to use his coloured etchings to launch fierce, often brutal attacks upon the follies of the day. Unlike Hogarth, however, who was mainly a social commentator, Gillray tended to focus his attention upon political affairs, though no one could be sure of escaping his critical eye. Indeed, one of his fiercest barbs was directed against Horatio Nelson’s mistress Lady Hamilton, published under the title Dido in Despair. His lampooning in general was characterised by a gross exaggeration of the physical features of his “victims”, and this outrageous, pitiless style set the tone for future political cartooning. 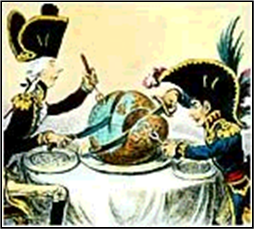 xxxxxAt first he directed much of his biting, witty satire against leading politicians (such as Charles Fox, Edmund Burke and William Pitt), and against members of the royal family - particularly “Farmer George” and his dissipated son the Prince of Wales. However, with the coming of the French Revolution, he turned patriot, and his main targets became the French in general and Napoleon in particular. He produced over a thousand prints, the first authenticated one being Paddy on Horseback, published in 1779. His publisher was a Miss Hanna Humphrey, and he lived in her house throughout his career, displaying his work in the windows of her printing shop. His colourful, audacious burlesques were well received on the continent as well as at home, but the strain of the work involved took their toll, and he was mentally deranged during the last five years of his life.

Suchxprogressive ideas were introduced in England in 1796 by the Quaker William Tuke (1732-1822). He persuaded the Society of Friends to open a Retreat in York, a home where the mentally sick could receive “a milder and more appropriate system of treatment”. Earlier, in 1788, a humanitarian regime of this kind had been introduced by the Italian physician Vincenzo Chiarugi (1759-1820) in his hospital in Florence.