xxxxxThe lawyer Georges Jacques Danton, one of the outstanding leaders and orators of the French Revolution, is generally considered to have played a prominent part in the overthrow of the monarchy in August 1792, and the establishment of the First Republic. He first came to prominence a month later, however, when as minister of Justice he organised the defence of Paris against an advancing Austro-Prussian army. In this position he was later accused of organising the first Terror, the September Massacres, though the evidence against him was flimsy. In April 1793 he became the leader of the newly formed Committee of Public Safety, and here he attempted to compromise, introducing a new Constitution to placate the provinces then in revolt, and trying to negotiate a peace settlement with the European monarchies. Neither succeeded, and he was replaced by the ruthless Robespierre in the July. From then on, his growing concern over the bloodshed unleashed by the Reign of Terror, marked him out as an “indulgent” (a “softie”), and in the interests of unity Robespierre had him executed in April 1794. 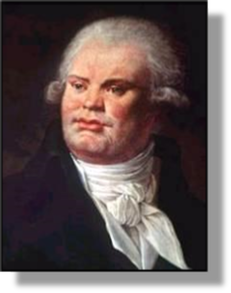 xxxxxThe French revolutionary leader Georges Jacques Danton was born at Arcis-sur-Aube, a small town in Champagne. After a good education, he trained as a lawyer at Reims and then set up a prosperous business in Paris. Despite his social standing, however, he showed a genuine interest in the welfare of his country and of its people. With the coming of the French Revolution in 1789, he quickly became involved in politics and, with others, founded the Cordelier Club, a body working in support of the radicals in the city. He soon became the leader of this group, and it was at this point that he gained a local reputation for his strong personality, and the fiery nature of his speeches, particularly those against the commander of the National Guard, La Fayette, who favoured a constitutional monarchy.

xxxxxCome the events of August 1792, it is generally believed that he organised the attack on the Tuileries that finally brought down the monarchy, and played a leading part in the establishment of the First Republic. In fact, however, he did not come to public prominence until, as minister of justice in the Legislative Assembly, he was set the task of organising the defence of Paris, threatened by the advance of a large Austro-Prussian army. In this post his ruthless efficiency and strength of character alarmed some but inspired many. Dictatorial he certainly was, but he proved the man for the hour. “To conquer the enemies of the fatherland”, he declared, “we need audacity, more audacity, audacity now and always, and France will be saved!” Every able bodied man in the city was summoned for military service, whilst others were employed in the manufacture of weapons. But, as we have seen, this call to arms incited further unrest among the Paris mob. Soon bands of armed men were at work in the city, rounding up royalist suspects, throwing them into prison and then brutally putting them to death. How far Danton was implicated in these “September Massacres” is not known, but if he did not sanction them, he is likely to have condoned them. He was beginning to see that, in a country seething with political and social unrest, a measure of terrorism was necessary to stamp out or cower the enemies of the revolution. 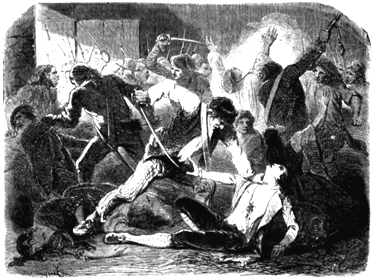 xxxxxWhen Danton was elected to the National Convention in September 1792, he did make a genuine attempt to reconcile the differences between the parties, but the moderate Girondists would have none of it. They accused him of organising the September Massacres (illustrated) - though there seems to be no conclusive evidence to that effect - and they also charged him with embezzlement. He countered their attack by branding them anti-revolutionary and federalist, but on the matter of bribery and corruption they almost certainly had a point. Serious, unexplained irregularities were uncovered in his accounts when he left his post as minister of justice. Furthermore, it is now generally accepted that, earlier on in his career, he acted as an informer on behalf of the Court, and received payment for his services.

xxxxxBy April 1793, following the formation of a powerful alliance of states against the new republic, France had its back to the wall. French armies were falling back from areas they had occupied earlier, whilst at home there was widespread unrest in a number of major cities, and across large areas of the country. Apart from opposition to the nationalisation of the Church, and the imposition of compulsory national service, there was much support for a federal system of government rather than a centralised control from a revolutionary government in Paris.

xxxxxTo meet this dire situation, an emergency executive body known as the Committee of Public Safety was set up on the 7th April, responsible for the defence of the land and, via the Revolutionary Tribunal, the stamping out of opposition at home. It was not until June, however, when Danton’s party the Montegnards, expelled the moderate Girondist party, that the committee took on dictatorial powers and began its work in earnest. Indeed, as the committee’s leader during its first term of office, Danton followed a surprisingly moderate policy. He drew up a new democratic Constitution to placate the provinces and, at the same time, made an unsuccessful attempt to negotiate with the European monarchies for an end to the war. Given this attempt at conciliation, it is perhaps not surprising that when the committee’s first term expired in July, Danton was not re-elected. In his place came his friend Maximilien Robespierre, and then a much tougher regime set in. Armies were sent to crush any opposition at home, and in September the Reign of Terror was established to bring the people to heel. 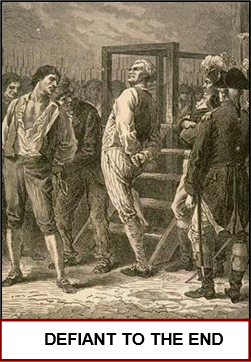 xxxxxBy this time, Danton’s disapproval of the scale of terrorist repression was there for all to see. In October, allegedly for reasons of ill-health, he withdrew from political life and went to stay in his home town. On his return six weeks later, he supported the Committee on a number of political issues, but made clear his opposition to the regime of extreme terror advocated by Jacques-René Hébert, the fervent leader of the sans-culottes. But in calling for what he termed “an economy in human blood”, he became regarded as one of the leading “indulgents” (“softies”), and this sealed his fate. By the beginning of 1794 the overall leadership in government was so split and corrupt that, in the interests of unity, Robespierre saw the need to rid himself of both the extreme parties. In March the radical left-wing Hébert, together with a number of leading Cordeliers, were arrested and sent to the guillotine, and five days later came the turn of the moderate “Indulgents”. Danton and fourteen of his friends were taken into custody and sentenced to death. “Infamous Robespierre”, Danton is said to have exclaimed, “You’ll follow me in a tumbril.” And so he did, but not until the Reign of Terror had reached its climax in June and July.

xxxxxThough clearly open to charges of opportunism, corruption and intrigue, Danton was nevertheless a genuine patriot, and his rapport with the common people won him their admiration and sympathy. As a competent leader and fine orator, he was seen by many as a prominent figure in the overthrow of the monarchy, and the establishment of the First Republic in September 1792. And to his credit must be added his willingness to compromise, and the courage he showed in openly opposing the excessive blood letting which had been unleashed in the cause of the revolution.

xxxxxIncidentally, a play entitled Dantons Tod (Danton’s Death) was produced in 1835 by the German dramatist Georg Büchner (1813-1837). It is an extremely pessimistic work, portraying Danton as a man deeply disturbed over the bloodbath that he himself had helped to bring about. Later, in 1899, the English writer and poet Hilaire Belloc included Danton in his series of biographies.