xxxxxThe Battle of Cape St. Vincent was fought off the south-west coast of Portugal in February 1797, when a British force of 15 ships intercepted a Spanish fleet of 27 ships. Nelson, then a commodore, seeing the danger of encirclement, pulled out of line and, attacking the enemy single handed, captured two of their largest warships. Despite acting without orders, he was later commended for his action. 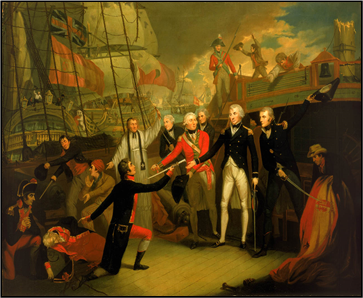 xxxxxIt was in February 1797 that a Spanish fleet of 27 ships, making for Brest to assist in a planned invasion of England, suddenly came up against a British fleet of 15 ships off the south west coast of Portugal, near the Cape of St. Vincent. ThexBritish admiral, Sir John Jervis, seeing a gap in the Spanish line, decided to split the enemy in two and, with the wind in his favour, take on each division separately. Commodore Horatio Nelson, however, sailing at the rear of the battle line, noticed that the Spanish group to leeward was preparing to turn and encircle the British fleet as it moved into the gap. Totally ignoring specific orders, he pulled out of his station and made straight for the Spanish ships, taking a number on single-handed until others of the fleet came to his support. For his own part in the action, Nelson boarded and captured the 84-gun San Nicholas and then, using her decks, captured the pride of the Spanish fleet, the 112-gun San Josef which lay damaged alongside. The Illustration shows him being presented with the Spanish admiral’s sword as a formal acknowledgement of the surrender. 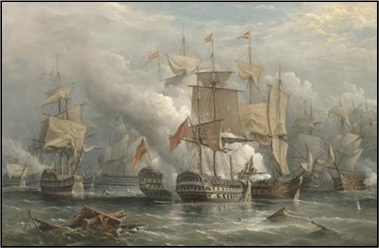 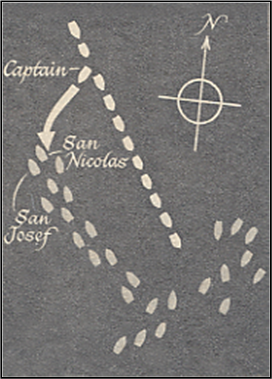 xxxxxAs in many sea-battles of this period, the accuracy and superior rate of fire of the British gunners played a major part in victory, as did the tactics employed by the commanders. In all, four Spanish ships were captured along with some 3,000 prisoners. The spoils might well have been greater had not the remainder of the Spanish fleet turned back and made for the safety of Cadiz. After the battle Jervis congratulated Nelson for his contribution to the victory, and both men were honoured. Jervis won the earldom of St. Vincent, and Nelson was knighted by the king and given a gold medal.