xxxxxAs we have seen, one of Napoleon’s first acts on becoming First Consul in 1799 was to wage war against the Second Coalition, formed earlier that year to curb French territorial ambitions. To stop further Austrian conquest in northern Italy, he crossed the Alps in 1800 and defeated the Austrians at the Battle of Marengo, forcing them to accept the Treaty of Luneville in 1801. In that year the British, weary of war, also sued for peace and agreed to the Treaty of Amiens in 1802. By this settlement Britain gave up all her conquests except Trinidad and Ceylon. For her part, France agreed to evacuate Naples and the Papal States, and return all Portuguese territory save that of Portuguese Guinea. But the treaty provided but a breathing space of fourteen months. Napoleon was bent on further conquest in Europe, and hankered after a colonial role in the Mediterranean and Indian Ocean. As we shall see, failure of both sides to adhere to the treaty was to provide the excuse for a renewal of the conflict between Britain and France in 1803 (G3c). Europe was then plunged into the chaos and carnage of the Napoleonic Wars.

xxxxxAs we have seen, one of Napoleon’s first acts on seizing the leadership of France in November 1799 was to confront the Second Coalition of nations, formed to curb French territorial ambitions. Encouraged by the British victory over the French at the Battle of Aboukir Bay in 1798, this new alliance included Great Britain, Austria, Russia, Portugal, Naples and the Ottoman Empire. Despite some controversy within the coalition as to the strategy to be adopted, Austrian troops had already made gains in Italy, and it was to here that Napoleon turned his attention.

xxxxxAfter forming an army of some 40,000 men in Switzerland, he crossed the Alps in May 1800 and, after a preliminary set back, soundly defeated the Austrians at the Battle of Marengo. This, together with a further French victory at the Battle of Hohenlinden, 25 miles east of Munich, convinced Austria that capitulation was the better part of valour. By the Treaty of Luneville in 1801 France became the dominant power on the European continent. It’s natural boundaries had been finally recognised - the Rhine, the Alps and the Pyrenees -, control had been regained over much of northern Italy, and command had virtually been established over the Austrian Netherlands and the Helvetic Republic.

xxxxxIn October 1801, Great Britain, weary of war, also agreed to a peace settlement with France, Spain and the Batavian Republic (the Netherlands). By the Treaty of Amiens, held in March 1802, Britain agreed to surrender to France and her allies all possessions seized during the conflict except Trinidad, captured from Spain, and Ceylon, taken from the Dutch. In addition, the British government undertook to restore Egypt to the Ottoman Empire, Malta to the Knights of St. John, and the colony at the Cape of Good Hope (Cape Settlement) to the Dutch. For her part, France agreed to evacuate Naples and the Papal states, and hand back all Portuguese territory save that of Portuguese Guinea.

xxxxxConsidering that the British had suffered no serious defeat at the hands of the French, there were those in Britain who, in the words of the politician Charles James Fox, regarded the treaty as a “shameful surrender to Napoleon”. Concern was expressed not only about the terms agreed, but also about matters not included in the negotiations, such as the fate of the Belgian provinces, French involvement in the affairs of Savoy and Switzerland, and, above all, trading rights within Europe. And notwithstanding the peace settlement, there were also fears throughout the continent that the wars of Revolutionary France in the 1790s were about to be replaced by the wars of its new ambitious First

Consul. There were plenty of opportunities for French aggrandisement, particularly in Germany, and the British were well aware that Napoleon had colonial designs in the West Indies and grandiose ideas of extending French influence into the Mediterranean and Indian Ocean. Furthermore, his domination of the Dutch Netherlands extended the threat to the English mainland.

xxxxxThus, as we shall see, the Treaty of Amiens provided no more than fourteen months of troubled peace. Failure of both sides to adhere to the treaty provided the excuse for a renewal of the conflict between Great Britain and France in 1803 (G3c). Europe was then plunged into the chaos and carnage of the Napoleonic Wars. 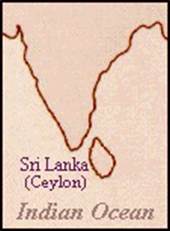 xxxxxIncidentally, the British East India Company seized Sri Lanka from the Dutch in 1796, after the French had gained control of the Netherlands. At first, occupation was seen as a temporary measure but, as the war with France progressed, the strategic importance of the island came to be recognised. In 1802 the British made Ceylon, as they called it, into a crown colony, and their ownership was confirmed by the Treaty of Amiens. The country gained its independence from the British in 1948, and reverted to its earlier name of Sri Lanka (“beautiful island”) in 1972.