xxxxxIt was in April 1797, when Britain was at war with Revolutionary France, that a naval mutiny involving the crews of 16 ships took place at Spithead Anchorage off Portsmouth. The men, determined and well organised, demanded better pay and conditions - then both at rock bottom - but agreed to put to sea if the French appeared in the Channel. The following month they were joined by the North Sea fleet, stationed at Nore in the Thames Estuary. The strength of this protest could not be ignored, and the government made concessions. Promises were given to improve pay and living conditions, some 50 officers were dismissed on charges of brutality, and the Royal Pardon was granted to all the mutineers. The Spithead crews accepted these terms, but at Nore, where political agitation was in evidence, more was demanded, including longer shore leave, and a greater share in prize money. When these demands were rejected, the mutineers tried to blockade the Thames, and the government was forced to take action. The mutiny was crushed, its leader Richard Parker and others were hanged, and many were imprisoned. 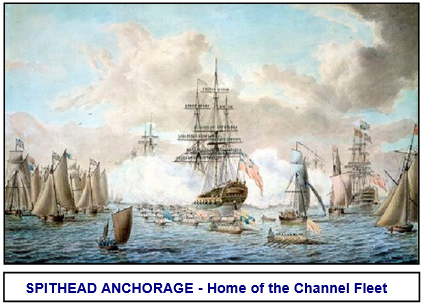 XxxxxThe outbreak of a naval mutiny at Spithead, off Portsmouth, in April 1797 could hardly have come at a worse time for the British government. Despite the victory over a Spanish fleet at the Battle of Cape St. Vincent in February, the opening years of an all-out war against Revolutionary France posed a constant threat of invasion. By this time the French had gained control of the Channel coast by re-conquering the Austrian Netherlands and occupying Holland. Moreover, the coalition of countries formed against France in 1795 offered Britain no support at sea. Without a powerful and efficient navy the nation stood in danger.

xxxxxThe mutiny was mainly in protest against the living conditions then endured aboard ship. Even by the standards of the day, the conditions under which the men lived and worked were appalling. The food and lack of it was a major grievance. The biscuits were often riddled with weevils, the water was often stale, if not putrid, and the lack of fresh vegetables caused widespread scurvy. To this was to be added a meagre pay which had not been increased for decades, and the excessive flogging and other forms of brutality by which discipline was maintained. 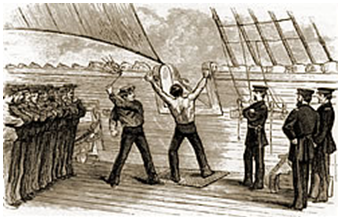 And in many cases these hardships were borne by men who had been press-ganged into service, and held captive at sea for voyages which, at best, could last months and, at worst, a number of years.

xxxxxThe mutiny began in April 1797, when the crew aboard the Channel fleet’s flagship, the Queen Charlotte, refused to put to sea and called upon other ships to join in their protest. In all, sixteen ships refused to sail, their crews demanding better pay, conditions and treatment. The men took over command, ran their ships by committee, and forcibly put ashore officers accused of ill-treatment. In the meantime, their demands for a redress of grievances, sent to the House of Commons, were firmly put but purposefully fell short of outright treason. The mutineers made it plain that if the French were to appear in the Channel they would go to sea in defence of the nation. And their case was strengthened considerably the following month when the mutiny spread to the North Sea fleet based at the Nore, an anchorage in the Thames estuary. This put at risk the navy’s blockade of the Dutch fleet, then allied to the French cause and stationed off Texel, the largest of the West Frisian Islands.

xxxxxFaced with such a critical situation and fearing that matters might become even worse, the government really had no alternative but to make concessions. The Admiralty promised better provisions and an increase in pay (the first since 1658), dismissed from the service over fifty officers accused of brutality, and granted a Royal Pardon to all those taking part in the mutiny. Such concessions were accepted by the men at Spithead, where, in general, acts of violence had been limited, and negotiations, led by Admiral Lord Howe, had been conducted in a peaceful manner via 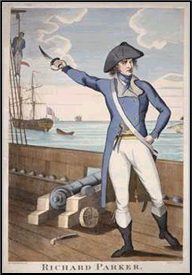 xxxxxButxit was a different story at the Nore, where political agitation was also at work. Here there were fears over the genuineness of the Royal Pardon, and much resentment over the fact that none of their officers had been dismissed. Furthermore, led by Richard Parker, a former midshipman (illustrated), the mutineers demanded a greater share in prize money, more shore leave, and changes in the Articles of War. When their demands were refused, they attempted to blockade the River Thames, and the government was forced to act. A bill was brought in to outlaw the mutineers, and the mutiny quickly collapsed. Parker and other ring leaders were hanged from the yardarm of HMS Sandwich, and many others were imprisoned or flogged.

xxxxxIncidentally, Captain William Bligh, the man who suffered at the hands of his own mutineers aboard the HMS Bounty in 1789, was one of the officers - then captain of the HMS Director - who was put ashore when his crew joined the mutiny at the Nore. …… 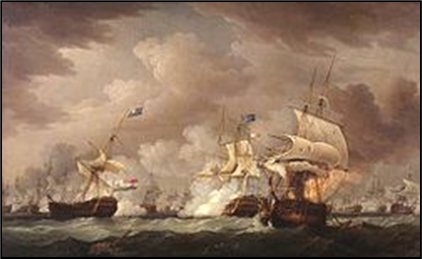 xxxxx…… Whenxthe mutiny of the North Sea fleet threatened to put an end to the blockade of the Dutch fleet - then allied with the French but held at bay near the island of Texel - the British commander, Admiral Adam Duncan (1731-1804), saw a large part of his force sail off to join the mutineers. The story goes that in order to keep the blockade going, he sailed within sight of the Dutch, and ran up flags periodically to give the impression that he was signalling to a fleet of ships which lay out of their sight. ThexDutch did, in fact, stay in port, and when they eventually came out in the October, the mutinies were over and Duncan, with a full compliment of ships, defeated them at the Battle of Camperdown (illustrated). ……

xxxxx…… The start of the mutiny was signalled by the sounding of five bells at 6.30 p.m. in what is known in the navy as the second dogwatch (there being two dogwatches or “divided” watches during the period 4 to 8 p.m.) Following the overthrow of the Nore mutiny, a slight change was made in the numbering system. The usual bells continued to be struck in the second dogwatch save for one exception. When it was 6.30 p.m. only one bell was sounded. So the signal for mutiny (five bells in the second dogwatch) was never heard in the Royal Navy again!