THE BATTLE OF COPENHAGEN 1801

xxxxxAs we have seen, Horatio Nelson returned to England from Naples in 1800. The following year, as second-in-command to Admiral Sir Hyde Parker, he was sent to the Baltic. By then, Denmark, Sweden, Russia and Prussia had formed an armed neutrality treaty, opposed to Britain’s declared right to search all neutral shipping on the high seas - seen as essential in the struggle against France. In April 1801 Nelson led the attack against the Danish fleet, then in the harbour at Copenhagen, and ignoring Parker’s order to withdraw, won a crushing victory. An attack was then planned against the Swedish naval base of Karlskrona, but Sweden and Russia agreed to a compromise settlement in 1802. In 1804 Nelson was sent to the Mediterranean to blockade the French port of Toulon. As we shall see, in 1805 (G3c) this led to a chase to the West Indies, the Battle of Trafalgar, and the death of Britain’s greatest naval commander.

xxxxxAs we have seen, it was in 1800, after two years stationed at Naples, that Horatio Nelson returned to England, together with his mistress Lady Hamilton. Early the following year she gave birth to their daughter, Horatia, just before Nelson left on his next campaign, centred on the Baltic. Denmark was selected as the first target for attack. In 1794, together with Sweden, it had formed an armed neutrality alliance - joined in 1800 by both Russia and Prussia - against Britain’s declared right to board and search all neutral vessels on the high seas during its desperate struggle with the French. The British action was seen as a violation of the right of free passage. 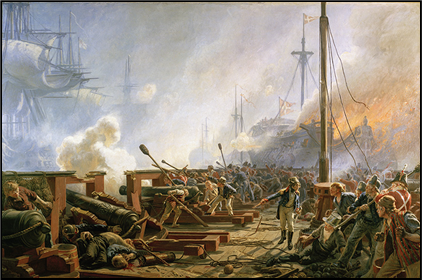 xxxxxThe plan was to attack the Danish fleet, then gathered in the harbour of Copenhagen. Nominally, Nelson was second-in-command of the operation, being subordinate to Admiral Sir Hyde Parker, but, as matters turned out, he was entirely responsible for the victory that followed. Because the water in the harbour was too shallow for the employment of the great ships-of-the-line, Nelson was assigned the task of taking a flotilla of smaller ships into the harbour to engage the enemy, while Parker remained anchored with the rest of the fleet some two or three miles off-shore. 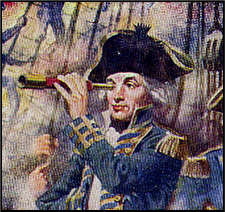 xxxxxThe task faced by Nelson was a daunting one. A line of shoals across the harbour not only served to protect the Danish fleet, but made entrance into The Sound and exit out of it extremely difficult. Furthermore, there were powerful batteries mounted along the shoreline to supplement naval gunfire. Having prepared his tactical plan throughout the night, early on the morning of the 2nd of April 1801 Nelson led the attack aboard the Elephant. The battle that followed was a ferocious one, with both sides fighting tenaciously. In the middle of it, Parker, alarmed at the amount of smoke rising from the contest, and fearing that his depleted force would soon be facing a triumphant Danish fleet, sent a signal ordering Nelson to break off the engagement. In an act of defiance which has gone down in naval history, Nelson raised his telescope to his blind eye, pointed it in the direction of the flagship, and declared that he could not see the signal! He went on to gain a crushing victory over the Danes, achieved in large part - and not for the first time - by the rapid fire and accuracy of his gunners. With twelve ships of the line he attacked a Danish fleet of 18 men of war. After three hours of furious gunfire more than half the Danish craft had been destroyed.

xxxxxThe British fleet then moved on to threaten the Swedish naval port of Karlskrona, but with the death of Tsar Paul, both Russia and Sweden began negotiations with Britain and were obliged to reach a compromise settlement in 1802. The following year Nelson was given the Mediterranean command and spent fourteen months blockading the French port of Toulon. As we shall see, in 1805 (G3c) this was to end in a chase to the West Indies, the Battle of Trafalgar, and the death of Britain’s greatest naval hero and commander. 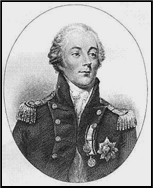 xxxxxIncidentally, three months after the Battle of Copenhagen another British admiral, Baron de Saumarez (1757-1836), defeated a combined French and Spanish fleet off the port of Cadiz. His squadron of six vessels destroyed three of the enemy’s nine ships in a battle which Nelson later described as one of the greatest ever fought. Earlier, Saumarez, a native of Guernsey, had distinguished himself at the Battle of Cape St. Vincent, and as second-in-command at the Battle of Aboukir Bay.