xxxxxThe Scottish explorer Mungo Park set out alone in May 1795 to discover the course of the River Niger in West Africa. Over the next eighteen months, despite hardship and dangers, he managed to trace the Niger downstream to Silla, but was then forced to turn back because of the lack of supplies. In 1805 he led an expedition of 40 Europeans to continue the search, but this ended in disaster. Only eleven survived the climate and the rigours of the journey and reached Segu. Then the nine who travelled further downstream by canoe were attacked by local tribesmen at the Bussa Rapids, and were drowned trying to escape. The mouth of the river was not discovered until 1830, when the English Lander brothers penetrated an area of mangrove swamps in the Gulf of Guinea and found the Niger beyond. 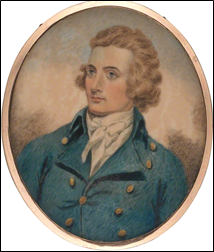 xxxxxThe Scottish explorer Mungo Park was born at Foulshiels, Selkirk, and trained as a surgeon at Edinburgh University. At the age of 21 he became a ship’s doctor aboard a vessel bound for the East Indies, and while in Sumatra he made a study of the animal and plant life on the island. It was on the strength of this work that he gained the backing of the London African Association for an expedition to find the true course of the Niger or Black River. Up to this time virtually nothing was known as to the direction and outlet of this great West African river. Some geographers thought it flowed out to the west, possibly reaching the sea in Gambia, others that it was part of the River Congo, and there were those who even suggested that it crossed the continent and joined up with the Nile. 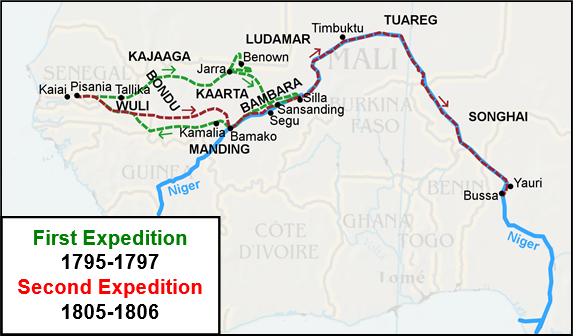 xxxxxIn May 1795, alone and hardly well equipped, he left Portsmouth for West Africa. Over the next eighteen months, travelling on foot or horseback and with just one native servant, he managed to trace part of the River Niger, despite a catalogue of hardships and dangers (see map). He reached today’s Gambia in June, and then travelled 200 miles up the River Gambia. On reaching the British trading station at Pisania (now called Karantaba), he struck out over unknown territory. On this leg of the journey he was slowed down by recurring bouts of fever, and then captured and imprisoned by an Arab chief. However, after four months held captive, he managed to escape, and he eventually reached the River Niger at the town of Segu in July 1796. He wrote in his log:

Saw with infinite pleasure the great object of my mission, the long

sought for majestic Niger, glittering in the sun … as broad as the

Thames at Westminster and flowing slowly to the eastward.

xxxxxHe then hoped to follow the Niger to its mouth, but after travelling some 80 miles downstream and reaching Silla, his supplies began to run out, and he was forced to turn back. On his return journey he took a more southerly route and nearly died of fever. He was obliged to stay with the Mandingo people for over six months, not reaching Pisania until June 1797. Once back in Britain he gave an account of his journey in his Travels in the Interior Districts of Africa, published in 1799. A scene from this work, possibly sketched by Park himself, is shown here. Apart from bringing him overnight fame, this established that for a considerable distance - some 300 miles at least - the river flowed eastwards.

xxxxxPark then settled down to married life and practised medicine at Peebles in Scotland, but in 1805, at the request of the government, he organised a second expedition to the Niger (see map above), this time leading a party of 40 Europeans. It proved a disaster. He reached Pisania and then moved on to Bamako (now capital of Mali), but by that time only eleven men had survived the rigours of the journey. They managed to reach Segu, and then in November 1805, having received permission from the local ruler to continue down the unknown reaches of the river, nine of them set off by canoe. What happened to them after that was not known for some years, but in 1812 it was learnt that having travelled about 1,000 miles and reached the Bussa Rapids, they were attacked by local tribesmen and were all drowned while trying to escape. In his last letter he had written:

termination of the Niger or perish in the attempt.

xxxxxA monument to Park stands on Jebba Island, near where he met his death, and there is one in the High Street of his home town, Selkirk, in Scotland. 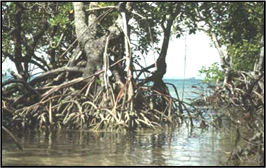 xxxxxIncidentally, the major reason why the course of the Niger was in dispute for so many years was because when the river turns south and nears the Gulf of Guinea it slows down amid thick rain forest, and enters the Atlantic through a maze of narrow channels. This area is made up of dense marshland and mangrove swamps, which stretch along the coast for some 120 miles, totally obscuring the mighty river itself - the third largest in Africa - and making entry extremely difficult. Indeed, as we shall see, it was not until 1830 that the English Lander brothers, John and Richard, discovered a navigable tributary and eventually reached the mouth of the river in the Gulf of Guinea.