xxxxxIn France, the wars of Louis XIV and XV, together with their highly expensive court at Versailles, had put the country into serious financial difficulties. The privileged nobles and higher clergy were exempt taxes, so the burden fell on the common people. They also had to pay a tithe to the Church, duties on their food, and give service to their lord. Thus when the weak Louis XVI came to the throne in 1774, his country faced bankruptcy, and there was growing unrest among its people. Attempts to reform the tax system failed and, following the cost of French intervention in the War of American Independence, the banks refused to give further loans. As a result, in 1788 Louis was forced to call the States General. The three sections or “estates” of this parliament - the nobility, clergy and commoners - met in 1789, and, after much wrangling, a National Constituent Assembly was formed, made up of all three estates, and with a clear majority for the commoners or mass of the people. By this time, however, rioting had broken out in Paris and other centres, and there were peasant uprisings throughout the land. As we shall see, in July 1789, Louis chose to send in the troops to restore his authority, and this led to open rebellion. The French Revolution was under way. 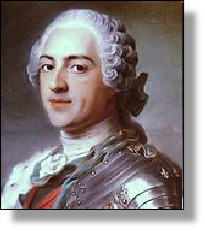 xxxxxBy the beginning of the 1770s, France was tottering on the very brink of financial and political bankruptcy. The reign of the Louis XIV, brilliant and successful though it had appeared to be, had bled the country white by its long series of wars, and the extravagance of its magnificent court at Versailles. At the same time a mania for centralised control had given absolute power to the monarchy, destroyed the political authority of the nobles, and left a yawning gap in the social system between the privileged élite - the nobility and higher clergy - and the vast mass of the working population on the land or in the towns. A fraction of the population lived in ostentatious luxury, whilst the vast majority struggled to keep alive, often facing severe food shortages. Under the Sun King’s successor, the indolent Louis XV (illustrated), there was no remission. Indeed, whilst the extravagance of the court continued to soar, and the plight of the masses worsened, the political prestige and the economic state of the country plummeted, reaching new depths with the nation’s ignominious defeat in the Seven Years’ War.

xxxxxAt the heart of the problem was the tax system, unashamedly based on social injustice. By their birth or status, the nobility and the higher clergy were exempt from the government tax, the taille. Thus almost the entire nation’s tax burden was borne by the 25 million common people. They, in addition, were required to pay a tithe, levied by the Church, together with duties on goods, including food. When no further tax could be squeezed out of the underprivileged, then the debt was left to accumulate. As Louis XV realised only too well, after him would come the “déluge”.

xxxxxBut within this mass of common people - workers on the land for the most part - there was a small but growing number of accomplished towns people or bourgeoisie. Made up of merchants, bankers, shopkeepers and the professional classes, these were growing in wealth and importance. Not unaware of the opinions of men of the Enlightenment, like Rousseau, Voltaire and Montesquieu, these were beginning to question the divine right claimed by the monarch, the unjust tax system, the great wealth of the Church, and the enormous privileges enjoyed by the nobility and higher clergy. 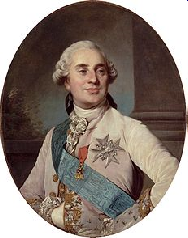 xxxxxThus when the hapless Louis XVI (illustrated) came to the throne in 1774, he inherited a huge national debt, an annual deficit which he had little hope of reducing, and a growing, grass-root demand for a programme of drastic reform. Theoretically, he was the absolute ruler of France, with all the power necessary to take the painful steps required to put his nation in order. In reality, however, the deeply entrenched rights and privileges of the nobility, the clergy, and the corporate bodies country-wide afforded him little freedom of action. The nation needed a monarch of outstanding ability and courage to tackle the situation, and Louis was not such a man. Indeed, on the contrary, he was totally unfitted to govern, being easily persuaded by others, and quite happy to drift with the tide. However, weak and indecisive though he was, he did attempt to alleviate the financial problem by appointing a number of able ministers. They came up with solutions, but were seldom given the opportunity to put them into practice. 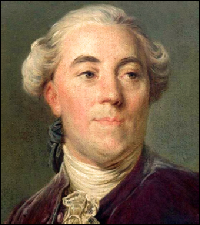 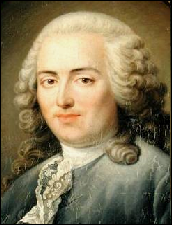 xxxxxThexfirst of these ministers was Anne Robert Turgot (1727-1781) (illustrated right). As controller general he introduced a programme of national renewal. Amongst other measures, he recommended a fairer system of taxation, and an end to restrictions on commerce and industry, but he came up against vested interest, and Louis was persuaded to dismiss him in less than two years. It was his departure which led to Voltaire’s remark: “The dismissal of this great man crushes me … I am waiting patiently for someone to cut our throats.” Turgotxwas followed by the Genevan banker Jacques Necker (1732-1804) (illustrated left). He suggested the payment of taxes by nobles and higher clergy, and made some economies, but any savings he managed to make were swallowed up in 1778 when the country went to war with Great Britain in support of the American colonists. He took out loans to finance the war, but he also came up against the opposition of the privileged classes who, having the ear of the king, engineered his dismissal. 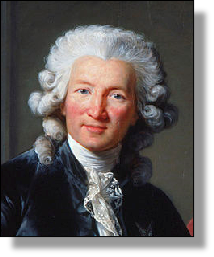 xxxxxThusxthe spending continued and the debt increased. By the time another able minister, the economist Charles Alexandre de Calonne (1734-1802) (illustrated) attempted to drag France back from the brink of disaster, it was virtually too late. In 1784 he re-established a sinking fund to pay off the war debt and, the following year, reformed the gold coinage, but he saw that more stringent measures were required. In August 1786, therefore, he advocated a land tax as a means of taxing the noble and clerical orders, but this proved a step too far. When, like the others, he was forced to stand down, he bluntly recorded: “France is a most imperfect kingdom, very full of abuses, and in its present condition impossible to govern.” It was swiftly becoming apparent that if measures of reform were not to come from the corridors of power on high, they were going to come from the crowded streets below.

xxxxxIn fact, the enormous cost of French participation in the American War of Independence, met by loans, proved the last straw. In 1787 the banks refused to lend the king more money, and the government of the country was paralysed. Amid unrest throughout the country, and a growing demand for reform - greatly encouraged by the American example - Louis was forced into action. Reluctantly, in August 1788 he reinstated Necker and called for elections in the spring of 1789 so that the States General could meet in the M 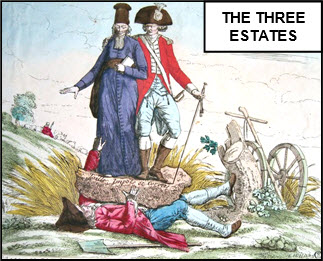 ay. In truth, this was an assembly from a bygone feudal day. Made up of three distinct sections or “estates” of the community - the nobility, the upper clergy, and the commoners - it had last met in 1614, nearly 175 years earlier. Then, each estate had had equal voting power and had met separately for deliberation.

xxxxxOn Necker’s advice, the “new and improved” States General was to provide greater voting power for the commoners (the “Third Estate”) in recognition of their overwhelming majority in the country. They were to have 600 members, equal to the strength of the other two estates combined. But, this apart, very little was done by way of preparation. No comprehensive plan was drawn up for constitutional reform, nor any directions laid down for the guidance of an assembly of 1200 inexperienced representatives. And, worst of all, no decision was made on the vital question as to whether the three estates should meet separately (giving an advantage to the nobility and clergy), or as one body (an arrangement in favour of the commoners). 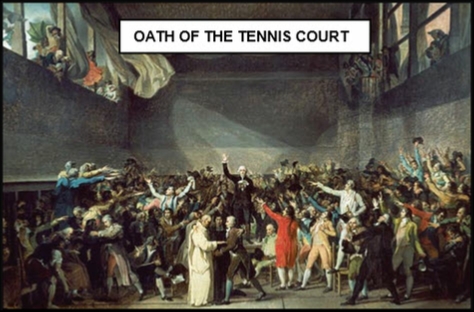 xxxxxWhen the States General assembled at Versailles in May 1789, hopes ran high, but it was on this very point - whether the three estates should sit together or apart - that the meeting quickly foundered. After complete deadlock for over five weeks, the commoners decided to go it alone. On the 17th June they declared themselves the “National Assembly” with the powers to make laws. Their meeting place then being closed by troops, they took themselves off to a nearby enclosure which was used as a tennis court. Here, by the so-called “Oath of the Tennis Court” on the 20th June, they swore not to disband until they had drawn up a new constitution and seen it adopted. For a week, war and peace hung in the balance; then on the 27th Louis caved in, and ordered the two privileged estates to meet with the commoners. The Crown was no longer absolute. The National Assembly, then renamed the National Constituent Assembly, had become the effective government of France. 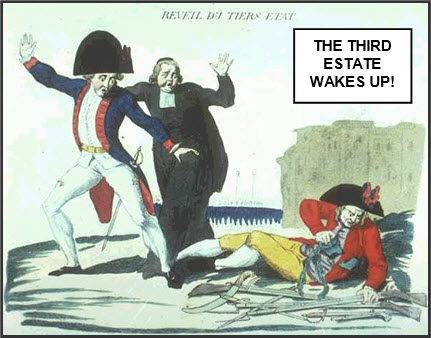 xxxxxIn this new governing body the commoners, with the support of a number of liberal nobles and clergy, had a clear majority, but their attempts to draw up a new political and social order were hampered by a serious lack of practical experience. Furthermore, there were diverging views as to the best course of action to be taken, led by men such as the Marquis de Lafayette, who had fought for the cause of freedom in North America, and the able but controversial Comte de Mirabeau, who favoured some form of constitutional monarchy. In such circumstances the impatience for reform spilled out onto the streets. For some time city mobs had murdered government officials, and peasants had plundered the castles of their masters. Now protest became more frequent and violent, led by organised agitators and extremists. Then, as we shall see, in July 1789 attempts by the king to control such disorder by force only served to inspire a violent, popular uprising in Paris - the storming of the Bastille. The French Revolution was under way.

xxxxxIncidentally, the Oath of the Tennis Court read:

We swear never to separate ourselves from the National Assembly, and

to reassemble wherever circumstances require, until the constitution of

the realm is drawn up and fixed upon solid foundations.

Xxxxx…… And to ensure that the event was recorded for prosperity, the Assembly invited the French neo-classical artist Jacques-Louis David along to paint the scene! (shown above). ……

xxxxx…… The pitiful state of France at this time was vividly described by the Englishman Arthur Young, who travelled extensively across France during the years 1787 to 1789. A writer on agriculture, he reported that there was widespread poverty, misery and discontent among the peasantry. He later put his findings on paper in his Travels in France, published in two volumes in 1792.