xxxxxRussia made three attempts in the 17th century to gain access to the Black Sea. The last one, made by Peter the Great (1689 W3), succeeded in capturing the fortress of Azov, but then lost it in 1711 during the Great Northern War. In 1735 he made another attack, but his ally, the Austrians, were badly defeated, and by the Treaty of Belgrade in 1739 Russian ships were barred from the Black Sea, even for trading purposes. It was Catherine the Great who made the first break through. In the early 1770s her forces overran Moldavia, Bessarabia and the Crimea, and, by the Treaty of Kuchuk Kainarji of 1774 (G3a) Russia at last gained a foothold on the Black Sea. Spurred on by this success, Catherine planned to overthrow the Ottoman Empire, and achieve the re-establishment of the Byzantine Empire based on Istanbul. She seized the Crimea in 1783, and then in 1787 Russian forces began a series of victories against the Turks. Once again, however, they were let down by their ally, the Austrians, and had to come to terms. By the Treaty of Jassy in 1792 the Russians gained land along the west coast of the Black Sea, and the Dniester became the new border, but the Ottomans survived to fight another day. In fact, as we shall see, there were to be four more Russo-Turkish wars during the 19th century.

xxxxxTowards the end of the 17th century Russia made three unsuccessful attempts to wrestle the Crimea from the Ottoman Turks and establish a warm water port on the Black Sea - seen as essential for the security and economic development of the motherland. As we have seen (1689 W3), Peter the Great (illustrated) made some progress towards this strategic aim. His campaign of 1695 ended in failure, but he then built a fleet at Voronezh, and the following year sailed down the Vokronezh and Don Rivers to capture the fortress of Azov. He founded a town on the site, but it did not remain in Russian hands for long. In the Great Northern War at the beginning of the 18th century Peter failed in his attempt to drive the Turks out of the Balkans and, suffering defeat at Prut River in 1711, had to return Azov to them.

xxxxxNor did a combined Russian-Austrian alliance, formed against the Ottoman Empire in the mid 1730s, fare any better. In 1735 the Russians, anxious as ever to break through to the Black Sea, went on the attack once again. They were joined by Austria two years later. The Austrians were bent on reducing the Turkish threat, but denied the services of their military commander Prince Eugene of Savoy (who had died in 1736), they were humiliated on the battlefield. They soon lost the fortress of Nis, seized earlier, and then went down to the Turks at the Battle of Grocka. Such was the extent of their military failure that in September 1739 they made a separate peace, obliging the Russians to do likewise. Byxthe Treaties of Belgrade, both lost out to their southern neighbour. The Austrians were forced to give up northern Serbia and part of southern Romania, thereby losing much that they had gained by the Treaty of Passarowitz in 1718. For their part, the Russians had to accept a demilitarised Azov, and agree to having no warships either on the Sea of Azov or the Black Sea. Furthermore, as far as the Black Sea was concerned, all their commerce was to be carried by Ottoman shipping.

xxxxxThese treaties, overseen and guaranteed by France, ushered in a period of relative calm. As we have seen, however, in 1768 the ambitious Catherine the Great opened up the conflict yet again, determined to gain control of the northern coast of the Black Sea with it access to warm-water ports and the Mediterranean beyond. Her highly successful campaign swept aside the humiliating terms of the Treaty of Belgrade in 1739. Her navy defeated the Turkish fleet at the Battle of Chesme in 1770 (off the coast of Asia Minor), whilst, on land, her troops captured Azov and overran Moldavia, Bessarabia and the Crimea. By the Peace of Kuchuk Kainarji, held in 1774 (G3a), the Russians at last gained access to the Black Sea, together with free navigation in Turkish waters for their trading vessels. In addition, Russia obtained a right of sorts to represent and protect the Ottoman sultan’s Christian subjects throughout the Balkans - another of Catherine’s ambitions. 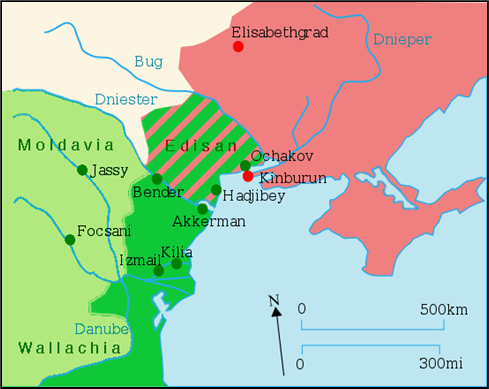 xxxxxGiven the impressive advance made by Russia in this area, and the decline into which the Ottoman Empire was slowly slipping, a further clash of arms was inevitable. It came in 1787 following Catherine’s seizure in 1783 of the Crimea - which had been made an independent khanate by the Peace of Kuchuk Kainarji and was, according to the Russians, in a state of anarchy. Her aim at this point, we are told, was the total defeat of the Ottoman Empire, and the re-establishment of the Byzantine Empire based on Istanbul. With this ambitious aim in mind, Russian forces won a series of victories and advanced to the lower Dniester and Danube rivers. Austria, however, having joined forces with Russia in order to obtain a share of the spoils, again withdrew their forces in the middle of the conflict, letting the Turks off the hook and dashing Russian hopes of a total victory. By the Treaty of Jassy in January 1792 the Turks recognised the Russian possession of the Crimean Kharnate (in pink), virtually annexed in 1783, and also ceded Yedistan (the area of green and pink stripes), thereby making the River Dniester the Russian-Turkish frontier in Europe. However, by way of compensation, the Turks did retain their lands of Bessarabia, Moldavia and Wallachia, and they did survive to fight another day. And there was to be no shortage of such fighting. As we shall see, there were to be four more Russo-Turkish wars in the 19th century, leading to further Russian expansion.