xxxxxThe colour-print artist Kitagawa Utamaro was the chief exponent of the movement known as Ukiyo-e - “pictures of the floating world”. One of the first Japanese painters to be known in the Western World, he specialised in Bijin-ga - pictures of feminine charm which were muted in colour and sensuous in form. In the 1790s he became famous for his single portraits of languid women, usually half-length. He also produced illustrated books on birds and flowers, one of his notable works being Ehon mushi erabi, a picture book of selected insects produced in 1788. In 1804 he fell out of favour with the ruling family, and following imprisonment, died two years later. He produced over 2,000 prints, notable works being The Seven Beauties of the Gay Quarter, Women in Love, and Physiognomies of Women, produced in 1794. 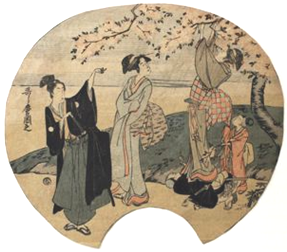 xxxxxThe Japanese colour-print artist Kitagawa Utamaro was the foremost master in the movement known as Ukiyo-e, meaning “pictures of the floating world”. He it was who perfected the art of coloured woodcut print, and became one of the first Japanese artists to be known in the Western world. His works were sent to Europe by Dutch merchants trading in Nagasaki, and they proved extremely popular.

xxxxxHe specialised in what the Japanese called Bijin-ga - pictures of feminine charm. Thus the majority of his prints were of elegant, beautiful women, muted in colour and both flowing and sensuous in form. Some were group studies of prostitutes, whilst others showed women in formal poses or going about their everyday activities. In addition, however, he did paint portraits of famous kabuki actors, and he was also a keen observer and accomplished painter of nature. Early on in his career, in partnership with a local publisher called Tsutaya Juzburo, he produced a large number of illustrated books on birds and flowers, and one of his best known studies, produced in 1788, was his Ehon mushi erabi, a picture book of selected insects.

xxxxxA contemporary member of the Ukiyo-e movement was Toshusai Sharaku. He gained overnight success with his dramatic, caricature-like faces of kabuki actors and sumo wrestlers. They were so menacing that they were banned from being displayed. He produced 150 such like portraits over a period of two years, and then was seen no more after 1794. Later, as we shall see (1833 W4), two landscape artists, Katsushika Hokusai and Ando Hiroshige also belonged to the Ukiyo-e art school. 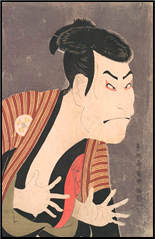 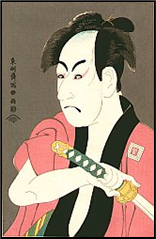 xxxxxA contemporary member of the Ukiyo-e movement was Toshusai Sharaku, who appeared on the art scene out of the blue and then vanished almost as quickly as he had come. His highly dramatic and original portraits of kabuki actors and sumo wrestlers, rich in colour and bold in execution, suddenly appeared on posters, and caused a stir among the public. Indeed, we are told that the authorities were so alarmed by the appearance of these menacing, caricature-like faces with their exaggerated facial expressions that they were banned from being displayed. He produced about 150 portraits over a two-year period and then was seen no more after 1794. It is believed that he was himself a Noh actor from Awa province, and some have identified him as Saito Jurobei. This would certainly explain why the vast majority of his works are centred on the kabuki theatre.

xxxxxAs we shall see (1833 W4), also belonging to the Ukiyo-e art school were the two later landscape artists, Katsushika Hokusai and Ando Hiroshige.

xxxxxHe lived for most of his working life in Edo (today’s Tokyo), and it was here, in the early 1790s, that, breaking away somewhat from Ukiyo-e tradition, he began to concentrate on producing single portraits of women, usually half-length. These pictures of languid, graceful females - some evoking a mild degree of eroticism - proved highly popular. In these works the colours were soft and fresh, and the models - many from the local “pleasure district” - were generally dressed in rich, decorative textiles. However, his highly successful career came to an abrupt end in 1804 when, having painted a group portrait of the wife and five concubines of the military ruler Toyotaomi Hideyoshi, he was accused of insulting behaviour towards the Tukugawa, the ruling family of that time. He was imprisoned in 1805 and, as a fitting punishment, so we are told, was handcuffed for fifty days. He never recovered from this humiliating ordeal, and died the following year. 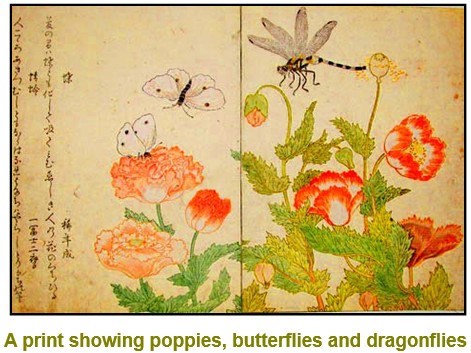 xxxxxDuring his comparatively short career, he produced over 2,000 prints (some patently erotic) and a large number of paintings and illustrated books. Ranked amongst the best of his prints are The Seven Beauties of the Gay Quarter, Women in Love, and Physiognomies of Women, produced in 1794. His work not only had an impact on the style of his fellow artists in Japan, but, by dint of their strong outlines and flat patterns, they also influenced a number of 19th century Western painters, including the Dutchman Vincent Van Gogh and the Frenchmen Henri de Toulouse-Lautrec and Edgar Degas. Perhaps not surprisingly, a great deal of his work is to be found in France.

xxxxxIncidentally, another leading member of the Ukiyo-e movement at this time was Torii Kiyonaga (1752-1815). He also concentrated on producing paintings and wood-block prints of beautiful women, their stately appearance achieved by elegant, graceful lines. Some of his best known works are of the women of the “gay quarters”, but he also depicted courtesans and the fashionable men and women of Edo (Tokyo) during the 1780s. He devoted some of his time to illustrating books and, later in his career, specialised in realistic prints of kabuki actors.