xxxxxIn 1791, the black slave Toussaint Louverture led a successful rebellion against the French colonial regime in his homeland of Saint-Domingue, today's Haiti. However, when the revolutionary government in Paris abolished slavery in 1794, he supported the French in driving the Spanish and British from the island. Then in 1801, having freed the slaves in the Spanish territory of Santo Domingo, he took charge of the entire island as a French protectorate. But in 1802, Napoleon re-imposed slavery, and sent a large force to re-conquer the colony. Toussaint's forces were defeated. He was captured, taken to France, and died in prison in 1803. Within a year of his death, however, the French had been routed, and the new black leader, Jean Jacques Dessalines, had declared Haiti a republic, the first independent nation in Latin America. 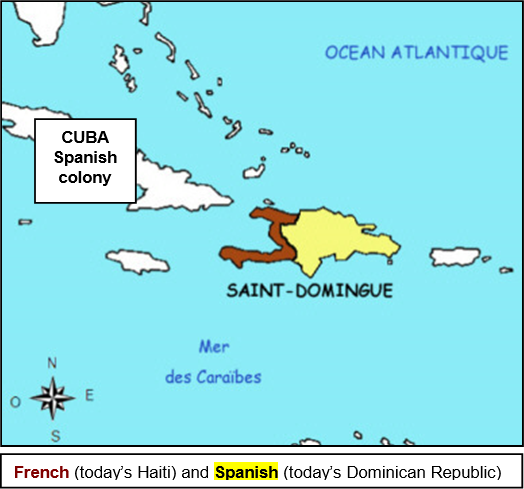 xxxxxThe famous negro Toussaint Louverture was born a slave in the French controlled part of Saint-Domingue, an island in the Caribbean (brown on map). Self-educated and strong willed, in 1791 he joined a black slave rebellion against the French colonial regime and was soon taking a leading part in the insurrection as their military commander. After France abolished slavery in 1794, he was appointed lieutenant governor in 1795 by the revolutionary government in Paris, and he then supported the French in driving the British and the Spanish out of their colony. Then In 1801 he attacked the Spanish territory of Saint-Domingue, freeing the slaves and becoming ruler of the entire island with the title of governor-general.

xxxxxBut his rule over what he saw as a French protectorate proved short-lived. In 1802 Napoleon re-imposed slavery, and sent a force of 20,000 to re-conquer the territory. Toussaint's forces were defeated, and he was captured and later accused of conspiracy. He was taken to France, and died in prison the following year. Honoured today as one of the founders of the state of Haiti, and known as "the Precursor", in 1983 his remains were returned to his homeland and given a ceremonial burial. 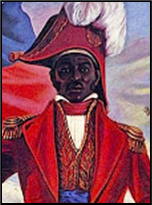 xxxxxIncidentally, within a year of Toussaint's death, the rebels, assisted by the British and the ravages of yellow fever, had driven the French out of Haiti, and the black leader Jean Jacques Dessalines (1758-1806) (illustrated) had declared himself emperor of the republic of Haiti - the first independent nation in Latin America. Following his assassination in 1806, rule over the island became divided until 1820. Then in 1844 the eastern side of the island declared its independence as the Republic of Santo Domingo (today's Dominican Republic). ...…

xxxxx...... Christopher Columbus landed on this island during his second voyage to the New World in 1494. He named it La Isla Española, and this became anglicized to Hispaniola. During Spanish colonial times it was often called Santo Domingo, after the capital city.

xxxxxThe French colony of Saint-Domingue, like much of the New World, owed a great deal of its prosperity to the slave trade. Towards the end of the 18th century, however, an Anti-Slavery Movement was gathering pace. In England, for example, Granville Sharp, Thomas Clarkson and Josiah Wedgwood formed the Anti-Slavery Society in 1787, and William Wilberforce promoted its cause in parliament. Denmark became the first nation to end its slave trade, and France, having formed its own anti-slavery society, abolished slavery in its colonies in 1794, though not permanently. Meanwhile in America, men like Benjamin Franklin and Thomas Paine were championing the cause of man's equality. As we shall see, it was in 1807 (G3c) that, mainly due to the eloquence and determination of William Wilberforce, the British parliament passed an act prohibiting British subjects from taking part in the slave trade. 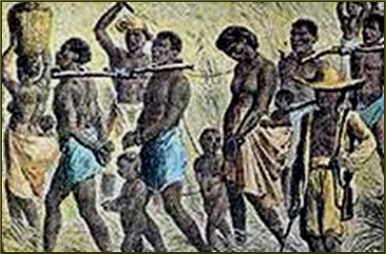 xxxxxDuring the 18th century, the French colony of Saint-Domingue - rich in sugar, coffee, cocoa, cotton and ebony - became one of the most prosperous colonial possessions in the New World. Much of its economic success, however, was due to slavery. It is reckoned that, over the years, some three million men, women and children were transported from West Africa and used as forced labour in the colony. Of these it is estimated that 25,000 died a year, either during the ghastly outward journey, or because of the hard working conditions on the estates and plantations.

xxxxxBy this time, however, a movement against slavery and the slave trade was gathering pace. Missionaries in the 16th century, and Quakers in the 17th century, had spoken out against such inhumanity, but it was towards the end of the 18th century that disapproval emerged on a much wider scale. In 1771, for example, the English humanitarian Granville Sharp (illustrated top left) persuaded British courts not to recognise slavery in England. Then in 1787 he joined the Englishmen Thomas Clarkson (illustrated bottom left) and the famous pottery manufacturer Josiah Wedgwood in forming the Anti-Slavery Society. In that year it established Sierra Leone in West Africa as a refuge for the "black poor of London", and the following year it recruited William Wilberforce as its spokesman in parliament. He persuaded his friend, Prime Minister William Pitt, to set up a select committee of the Privy Council to look into the whole question of the slave trade. And opposition was not always on moral grounds. Economists, notably the Englishman Adam Smith in his The Wealth of Nations, argued that slaves were more expensive to keep than free labourers, and that the plantation system they helped to maintain was a wasteful use of land.

xxxxxAnd there was growing opposition to the slave trade elsewhere. In 1788, for example, the French abolitionists founded the Society of the Friends of the Blacks, and six years later the revolutionary government in Paris abolished slavery in its colonies - though nor permanently. Denmark, however, was the first country to outlaw the transatlantic trade, doing so in 1792. In North America, the champions of American independence - such as Benjamin Franklin and Thomas Paine - saw no place for slavery in their concept of a new state where all men were to be equal.

xxxxxIn Britain, as we shall see, it was mainly due to the eloquence and determination of William Wilberforce that Parliament passed an act in 1807 (G3c) prohibiting British subjects from taking part in the slave trade, and four years later made participation a criminal offence punishable by transportation to a penal colony. Total abolition came in 1833, just a matter of months before Wilberforce's death.