xxxxxHaving seized power in France in 1799 and made himself the First Consul, Napoleon went to war against the Second Coalition. He crossed into Italy, and in June 1800 encountered the Austrian army at the Battle of Marengo, north of Genoa. At first outnumbered, he was forced to make an orderly retreat, but with the arrival of reinforcements the Austrians were soundly defeated. As a result, the coalition collapsed, and by the Treaty of Lunéville in February 1801 the French regained their possessions in northern Italy. In addition, the natural boundaries of France were recognised - the Rhine, the Pyrenees and the Alps -, as was the right of France to control the Austrian Netherlands and the Helvetic Republic (the larger part of Switzerland). Later in the year Great Britain, having grown weary of the war, opened peace negotiations, and came to a settlement with France at the Treaty of Amiens in March 1802. 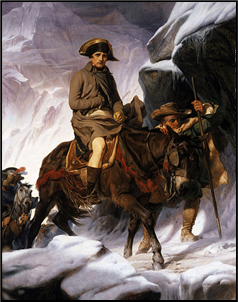 xxxxxAs we have seen, when Napoleon returned to Paris in October 1799 he was regarded by many as the saviour of his country. Under the weak and corrupt Directorate, established four years earlier, France was near to anarchy at home, whilst losing ground abroad to a Second Coalition of nations. In November 1799, with the aid of his army, Napoleon overthrew the government in Paris, and set up a Consulate with himself as First Consul. Possessed of dictatorial powers, he then wasted no time in taking the offensive against his new set of enemies, which included Great Britain, Austria, Russia and the Ottoman Empire.

xxxxxThe coalition’s main thrust was in Italy, where Austrian forces were in the throes of regaining lost ground. In May 1800 he assembled an army in Switzerland, some 40,000 strong, and, marching it over the Alps via the hazardous St. Bernard Pass (illustrated), entered Milan at the beginning of June. The Austrians were taken by surprise, but Napoleon, unable to locate their principal force, was obliged to send out reconnaissance units, and this weakened the overall strength of his army. Thus when the Austrians eventually advanced against his main camp at Marengo, north of Genoa, he found himself heavily outnumbered. 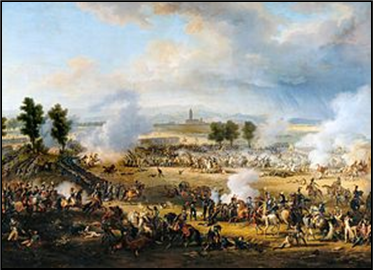 xxxxxIn the opening phases of the battle Napoleon was forced to fall back some four miles, but he accomplished his retreat in good order and sent for reinforcements. The Austrians felt confident of victory, but early in the afternoon a French division of about 10,000 men arrived to attack them on one flank, while Napoleon’s cavalry attacked them on the other. This, together with an artillery bombardment on the central front, put the Austrians to flight. They lost about 8,000 troops, whilst the French losses were little more than half that number. It was one of Napoleon’s greatest victories, snatched out of the jaws of defeat.

xxxxxAxfew months latter a French army under General Moreau won the Battle of Hohenlinden just east of Munich, and this brought about the collapse of the coalition. By the Treaty of Lunéville in February 1801, the Ligurian and Cisalpine republics were re-established and later, Piedmont, Piobino, Elba and the Duchy of Parma were annexed to France. Austria also lost 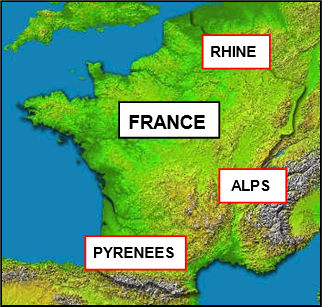 control of Tuscany to the king of Etruria, son of Ferdinand of Parma, but did retain Venetia, acquired in 1797 at the end of Napoleon’s earlier Italian campaign. In the south the Pope and the Bourbons remained in power, but with diminished status. France itself, now the most dominant nation on the continent, received recognition of its natural boundaries - the Rhine, the Pyrenees and the Alps (illustrated) - and its hold over the Austrian Netherlands and the Helvetic Republic (the greater part of Switzerland) was confirmed. This settlement marked the virtual end of the Holy Roman Empire, a conglomeration of states in central Europe which had played a major part in continental affairs, particularly under German kings.

xxxxxWith this treaty concluded, only the British remained at war with France. Tiring of the struggle, they began negotiations for peace in October 1801 and, as we shall see, signed the Treaty of Amiens in March 1802. This brought peace to Europe for the first time in ten years. 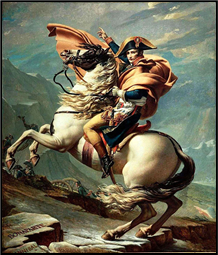 xxxxxIncidentally, shown here is a much more heroic, iconic interpretation of Napoleon’s crossing of the Alps, the work of the outstanding French painter Jacques-Louis David! The painting was commissioned by the then Spanish ambassador to France, and he took it back to Madrid at the end of his appointment. However, when, in 1813, Joseph Bonaparte (Napoleon’s elder brother) abdicated as the King of Spain and went into exile in the United States, he took the painting with him, and it hung for some years at his home in New Jersey. Eventually, in 1949 a member of the family returned it to France, its place of origin, and it can now be seen in the museum at the Château de Malmaison, the former residence of Josephine Beauharnais, some seven miles west of Paris. (For the record, it must be noted that Napoleon actually made his famous crossing astride a mule!) ……

xxxxx…… Napoleon’s chef later invented a fashionable dish called “Chicken Marengo”. The name came from a meal which he hastily put together after the battle.