xxxxxInspired by the successful flight of the Montgolfier hot-air-balloon in 1783 (G3a), the Frenchman François Blanchard took up ballooning in 1784. At the beginning of 1785 he and John Jeffries, an American physician, took off from Dover and made the first aerial crossing of the English Channel, landing near Calais. He then went on to become the first balloonist to make flights in Germany, Belgium, Poland and the United States. On returning to Europe he continued with his demonstration flights, but in 1808 he suffered a heart attack while flying, and died of his injuries the following year. In 1819 his wife, Marie, also a balloonist, likewise fell to her death in 1819, when her balloon caught fire during a firework display in Paris. Blanchard also made some experiments in the use of a home-made parachute, but it was left to his countryman André Garnerin to develop parachuting in earnest. 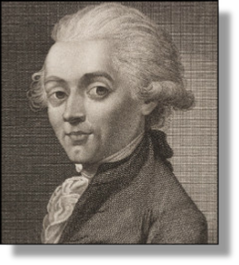 xxxxxThe French pioneer aeronaut François Blanchard (illustrated) was born in Les Andelys, Normandy. He began work on a design for a heavier-than-air flying machine in the 1770s - planning to row in the air currents by means of oars - but turned to ballooning following the successful flight of the Montgolfier hot-air-balloon in 1783 (G3a). Wasting no time, he made his first ascent in Paris in March of 1784. Thenxat the beginning of 1785 he took off from Dover, accompanied by the American physician John Jeffries (who had helped to finance the enterprise), and made the first aerial crossing of the English Channel, landing in the Felmores Forest near Calais. The crossing was not without incident. During the flight they began to lose height, and twice came close to “ditching” in the sea. To keep aloft they were forced to throw all their cargo overboard, and to discard their overcoats. We are told that Blanchard even took his trousers off! The only item they kept was a bundle of letters tied up in a bladder - the first international airmail! 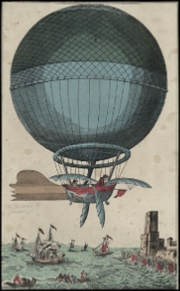 xxxxxHaving landed among the trees and experienced some difficulty in bringing the balloon finally down to earth, the aeronauts were escorted in triumph to Calais, some seven miles distant. When they arrived there it was past midnight, but the gates of the city were opened for them and they were received amid jubilation. The achievement was seen by many as the “Eighth Wonder of the World”, and the French king, Louis XVI, awarded Blanchard a handsome sum of money together with an annual pension. Later, a balloon-topped marble monument was built at their landing place in Guisnes. The basket which carried him and Jeffries on this historic flight survived, and can be seen in Calais museum.

xxxxxFollowing this success, Blanchard became the first balloonist to make flights in Germany, Belgium and Poland. It was during these flights that he attempted to steer the balloon and increase its speed by the use of sails, but the idea never worked. In 1793 he made the first balloon flight in North America. Watched by President George Washington, he took off from the Washington prison yard in Philadelphia and landed in Gloucester county, New Jersey. Having awoken interest in ballooning in the United States, he returned to Europe with his wife Marie - also a keen balloonist - and continued his exhibition flights. In February 1808, however, he suffered a heart attack while flying over The Hague. The balloon plunged to the ground and he died of his injuries the following year. Marie continued to fly, but she too fell to her death in 1819, when her hydrogen balloon caught fire during a firework display in Paris.

xxxxxIncidentally, later in 1785 a second attempt to cross the English Channel ended in total disaster. Jean François Pilâtre de Rozier, the man who, with the Marquis d’Arlandes, had made the first manned balloon flight in November 1783, set of from Boulogne-sur-Mer in June but travelled only a short distance. The balloon suddenly deflated and plunged to the ground at Wimereux in the Pas-de-Calais, killing Rozier and his companion Pierre Romain. ……

xxxxx...... The French were the first to use the balloon on the battlefield - mainly for reconnaissance purposes during the 1790s. As we shall see, balloon flights were also put to good use in the American Civil War, notably during the Gettysburg campaign of 1863 (Vb). Balloons also came to be used for scientific research, but ballooning as a sport did not really catch on until the early part of the 20th century. …… 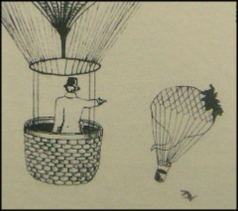 xxxxx…… Thexyear 1808 saw a somewhat remarkable event - a duel fought high above Paris. Two Frenchmen, Monsieur de Grandpre and Monsieur de Pique, decided to settle their quarrel over the love of a famous woman dancer by shooting at each other from their hot air balloons. They opened fire at a height of 2,000 ft and both missed their adversary, but Grandpre’s shot punctured de Pique’s balloon. The basket tipped over and both de Pique and his second plunged to their deaths. Grandpre landed safely some miles distant! ……

xxxxx…… Onexof the longest flights in the early days of ballooning was made in 1836 by the English balloonist Charles Green (1785-1870). With two companions he flew from London to Weilburg in Nassau, Germany, a distance of 480 miles in 18 hours. This set a long distance record which was not beaten until 1907. 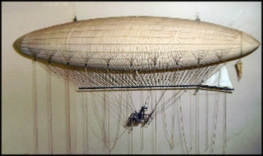 xxxxx…… Inx1852 The French engineer Henri Giffard (1825-1882) designed and flew the first powered and controlled airship. Equipped with a 3hp steam engine that drove a propeller, it travelled some 17 miles across Paris. ……

xxxxx…… Blanchard also carried out a number of experiments with parachutes. It is said that during one of his exhibition flights he dropped a basket containing a small dog from the balloon, using a parachute to bring it safely down to earth. And earlier, as we have seen, the Frenchman Louis-Sebastien Lenormand is reported to have jumped from the tower of the Montpellier Observatory and landed safely by means of his home-made parachute. But the pioneer in parachuting was the French balloonist André Garnerin.

xxxxxBlanchard made some experiments in parachuting, but it was the French balloonist André Garnerin (1769-1823) who was the first to make regular jumps. He gave his first demonstration in Paris in 1797, jumping from a height of 3,200 feet, and then gave exhibition performances in a number of European cities. His most spectacular jump was from 8,000 feet, made in England in 1802. The parachute he used was made of canvas, about 27 feet in diameter, and shaped like an umbrella. 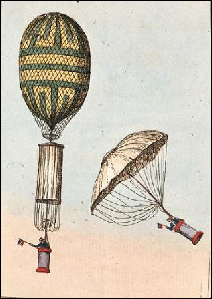 xxxxxBut the first man to use a parachute with regular success was the French balloonist André Garnerin (1769-1823). He made his first exhibition jump in Paris in 1797, descending from a height of 3,200 feet, and then went on to give demonstrations in cities all over northern Europe. His most spectacular jump was from 8,000 feet, made in England in 1802. As a student Garnerin studied physics and, influenced by Blanchard’s escapades, took up ballooning. He joined the French army in his early 20s, eager to promote the use of balloons for military purposes, and it was on his return to Paris around 1795 that, together with his brother Jean-Baptiste-Olivier, he began experiments in parachute jumping. The parachute he eventually used was made of 32 ribbed segments of white canvas, about 27 feet in diameter, and shaped like an umbrella. The illustration shows it going up and coming down.

xxxxxIncidentally, thexfirst time a parachute was used in a real-life emergency was in July 1808 when a Polish balloonist, Jodaki Kuparento, jumped to safety after his balloon caught fire. Since then, of course, thousands of aviators and flight passengers have owed their lives to the parachute, conceived by Leonardo da Vinci as early as 1495, or thereabouts (illustrated).