xxxxxThe Englishman David Ricardo became interested in economics after reading Adam Smith’s Wealth of Nations. Influenced by the writings of his friends Jeremy Bentham and Thomas Malthus, he did much to establish economics as a systemised branch of science. His major work was Principles of Political Economy and Taxation, produced in 1817. In this he argued that an increase in population would keep wages at subsistence level - his “Iron Law of Wages” - whilst increasing the income of landowners. This, together with a decline in food production - the concept of “diminishing returns” - would lead to class warfare. He was a firm advocate of laissez faire and free trade, arguing that nations should trade in those commodities in which they had a “comparative advantage”. He worked closely with the Scottish economist and philosopher James Mill, father of his more famous son, the celebrated economist John Stuart Mill. 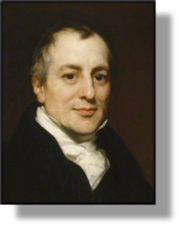 xxxxxThe English economist David Ricardo was born in London. He only had an elementary education, but soon after leaving school at the age of 14 he joined a firm of brokers and within ten years had made a fortune on the stock exchange. He began writing on economic affairs in the early 1800s after reading Adam Smith’s Wealth of Nations. The theories he then put forward, whilst influenced by the ideas of Jeremy Bentham, and owing much to the work of Adam Smith and Thomas Malthus, brought a greater degree of order into this new branch of knowledge and, by so doing, strongly influenced future economic thought. 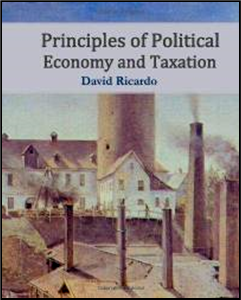 xxxxxHis first work, The High Price of Bullion, a Proof of the Depreciation of Bank Notes, published in 1809, called upon the Bank of England to control the volume of money and credit, and made a strong plea for a currency based on metal. This was followed in 1815 by his Essay on the Influence of a Low Price of Corn on the Profits of Stock, in which he put forward a strong case against the imposition of high tariffs on grain imports. His major treatise, Principles of Political Economy and Taxation, produced in 1817, contained the bulk of his reasoning on the laws governing the distribution of wealth. Fearing the increase in population as predicted by his friend Thomas Malthus, he shared his pessimistic outlook, based on the concept of “diminishing returns”. He argued that a larger labour market would keep wages at a subsistence level - his “Iron Law of Wages” -, whilst the shortage of productive land would bring a rise in the income of landowners. Such a situation, combined with a progressive decline in the returns from agriculture, would ultimately lead to class warfare. Given such a prognosis, it could be argued, as some did, that this school of thought saw little point in social reform and was, ipso facto, opposed to any measures in that direction. 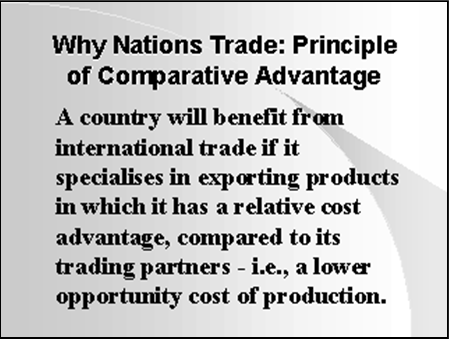 xxxxxIn the matter of international trade, Ricardo came out strongly in favour of freedom of competition. In keeping with the classical liberalism expounded by Adam Smith, he held that the forces of the market place would work to the benefit of all if left to develop freely, unhindered by government interference. However, he modified Smith’s theory. Whilst agreeing that countries should clearly specialize in the production of those goods in which they had an advantage, he argued that this advantage need not necessarily be “absolute”. The advantage could also be “relative” on the grounds that the benefit of trading in a certain commodity was determined not by a comparison of costs between the two trading countries, but by the comparative costs within the trading countries themselves. This refinement, based on the idea of the “principle of comparative advantage”, provided the strongest argument for unimpeded international trade based on private enterprise, and became the corner stone of the 19th century doctrine of free-trade.

xxxxxIn 1819, towards the end of his life, Ricardo bought a seat in the House of Commons, but ill-health obliged him to retire four years later, and he died that year, aged 51. Although many of his ideas have since been superseded, and others have been redefined, his attempt to create a more comprehensive and systematic approach to the science of economics lived on, and in this respect had a marked influence on economic thought throughout the 19th century. Furthermore, his firm belief in the benefits of laissez-faire capitalism attracted a large number of followers, whilst others, like the communist Karl Marx, though strongly opposing such a doctrine, eagerly latched on to his “labour theory of value”, which placed such emphasis upon the value of the work force in the production of wealth. Apart from his friendship with Jeremy Bentham and Thomas Malthus, Ricardo worked closely with the Scottish social philosopher and economist James Mill.

xxxxxThe Scottish economist James Mill (1773-1836) was a disciple of Jeremy Bentham and a leading member of his Philosophical Radicals. He settled in London in 1802 and, as a journalist, wrote a wide variety of trenchant articles for a number of newspapers and journals. Apart from economics, these covered subjects such as politics, education, church reform, law, and freedom of the press. His article Government, calling for a wider franchise, helped to prepare the ground for the Reform Bill of 1832. He wrote a three-volume work on the History of British India, completed in 1817, and his major treatise on economics, Elements of Political Economy (1821) set out his ideas on philosophical radicalism, a school of thought based closely on the teachings of his colleague and fellow economist David Ricardo. As we shall see (1859 Va), his son, John Stuart Mill, was to become a prominent economist and philosopher. 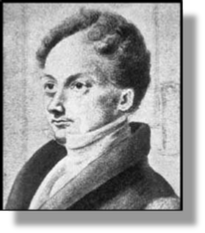 xxxxxJames Mill (1773-1836) was a close friend and disciple of Jeremy Bentham and a leading member of his Philosophical Radicals, a group of journalists and intellectuals seeking social and economic reform based on individual freedom. In his writings he developed and widely publicized Bentham’s theory of Utilitarianism, and his major contribution in economics, his Elements of Political Economy, published in 1821, set out in precise and clear terms his ideas on philosophic radicalism, a school of thought based very closely on the teachings of his colleague and fellow economist David Ricardo. 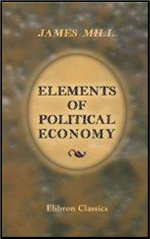 xxxxxHe was born near Montrose on the east coast of Scotland. The son of a shoe maker, his mother was determined that he should receive a good education. He attended the local parish school and then Montrose Academy before studying divinity at Edinburgh. He was ordained a Presbyterian preacher in 1798 but, not convinced of his calling, he settled in London in 1802 and took up journalism. There he became editor of the London Literary Journal in 1803, and of the St. James’ Chronicle two years later. In 1824 he helped Bentham to establish the Westminster Review. In addition he made regular contributions to a large number of newspapers and other journals, including the Edinburgh Review, and these ranged over a wide variety of subjects, such as economics, politics, church reform, education, law and the freedom of the press. His articles, provocative and well written, aroused a deal of interest in their time, and one in particular, Government, by advocating a wide extension of the franchise, played an influential part in the run-up to the Reform Bill of 1832. 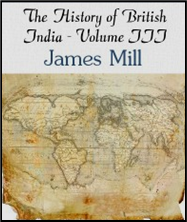 xxxxxAt the same time, in 1806 he embarked upon A History of British India, a vast, three-volume work which took over ten years to compile and, when completed, provided the first scholarly attempt to trace the conquest of this sub-continent. Its publication in 1817 not only marked him out as an historian of distinction, but, two years later, earned him a post in the office of the East India Company, an appointment which provided him with a lucrative career. This history, his major literary achievement, served to bring about changes in the administration of India at that time.

xxxxxIn 1829 Mill also produced Analysis of the Phenomena of the Mind, an ambitious attempt to develop utilitarian doctrines by an explanation of the association of ideas. This venture into psychology, together with his history of India and his vast number of challenging articles - particularly those on political affairs - made him an influential figure in the radical movement of the early 19th century. But perhaps his greatest contribution to the Utilitarian movement was yet to come, realized in the person of his son, the celebrated John Stuart, the first of nine children. The young Mill received a rigorous education at the hands of his father in order that he likewise might become a disciple of Bentham. The strict teaching regime to which he was submitted achieved its aim, but, as we shall see (1859 Va), the celebrated John Stuart Mill was to mollify a doctrine which, in essence, seemed to be more interested in the economic welfare of the state than the well-being of the individual. 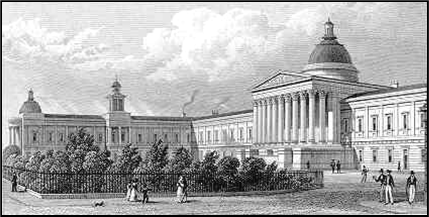 xxxxxIncidentally, James Mill was one of the founders of London University. In 1825 he took part in the discussions that led to the opening of the university, specifically founded to provide education for that class of student which was between the “mechanics” and the “enormously rich”. It also provided for students who were excluded from Oxford or Cambridge on religious grounds. The first two institutions were the non-sectarian University College, founded in 1826, and King’s College, founded by members of the Anglican Church in 1829. In 1836 a charter established an examining body with the power to grant degrees.

xxxxxWorthyxof mention here is the French political economist Jean Baptiste Say (1767-1832). A devoted disciple of Adam Smith, his major work, A Treatise on Political Economy of 1803, clearly defines the principles of economic liberalism. His “law” that the capitalist system was self-regulating and should be left free of government interference, dominated French economic thought during the first half of the 19th century.