xxxxxThough still involved in the Peninsular War, by 1810 Napoleon appeared to be at the height of his power. The French dominated all of continental Europe by one means or another. In 1812, however, to force Alexander I to comply with the blockade of British shipping and, at the same time, to cut his country down to size, Napoleon took the fatal decision to invade Russia and occupy Moscow. He reached the capital in October after a narrow victory at the Battle of Borodino, but Alexander would not negotiate, and Napoleon’s vast army was forced to retreat. By then winter had set in, and the harsh weather conditions, together with constant attacks by Cossacks, almost destroyed the French army. It is estimated that 350,000 lost their lives. This disaster encouraged European nations such as Austria and Prussia to seek their independence. Surprisingly, the following year Napoleon, having formed a new army, won the Battles of Lutzen and Bautzen against Russia and Prussia, but, as we shall see, he lost to the allies at the Battle of Leipzig in October 1813, and this appeared to mark the end of his fighting career.

THE RETREAT FROM MOSCOW 1812 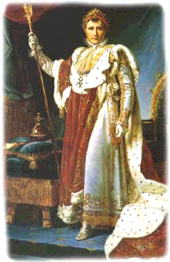 xxxxxBy 1810 Napoleon appeared to be at the very height of his power. The Peninsular War against Spain and Portugal - aided by the British - continued unabated, but this “sideshow” apart, the French dominated all of continental Europe by one means or another. Furthermore, his divorce from Josephine and his marriage to the Austrian Archduchess Marie-Louise - following his victory at the Battle of Wagram - had provided him with a son and heir. The future of his dynasty and his empire seemed assured. And, given the ever-ready presence of his Grande Armée, so it might well have remained for many years ahead had it not been for his fatal decision, made in the opening months of 1812, to invade Russia, his one-time “ally”. 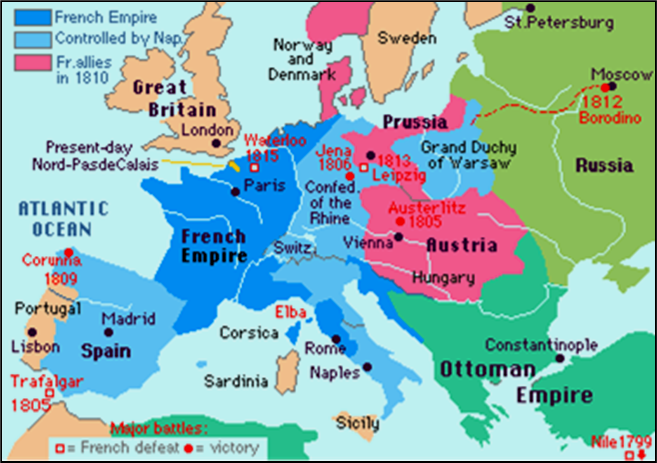 xxxxxThis decision is seen as his second major blunder, the first being the invasion of Portugal in 1808. It was clear that Napoleon had cause and need to take some sort of action against Russia, but in this case the military strategy he adopted was fatally flawed. The agreement reached between Napoleon and Tsar Alexander I at Tilsit in 1807, and confirmed later at a meeting at Erfurt in 1808, made them allies in name, but not in purpose. When the blockade of British shipping - then known as the Continental System - proved unacceptable to Alexander, he conveniently renounced it. For his part, Napoleon, the new Charlemagne, saw this as an act of rebellion by an empire which, in any case, loomed like a vast, menacing cloud over eastern Europe. As of necessity, he saw the need to invade Russia, seize Moscow, and force the Tsar to come to a new and more compliant understanding. It was a decision which, hastily taken, led to his ultimate downfall.

xxxxxAt first, it should be noted in fairness, Napoleon attempted to force a settlement by a sheer show of strength. In April he massed his huge army along the Russian border - over half a million strong and including contingents from Prussia, Austria, Holland and Italy. Perhaps not surprisingly, it failed to intimidate Tsar Alexander, who had come to see himself as the “strong man of the North” destined, according to holy scripture, to destroy the “Anti-Christ”, the French emperor himself. Having no alternative, as he saw it, Napoleon then crossed the River Niemen towards the end of June 1812 and plunged into Russian territory.

xxxxxHis army was soon in difficulties. Quite apart from the extreme heat over the open plains, the scorched-earth policy adopted by the Russians as they retreated - leaving little left for their enemy to live off - made the going slow and exhausting. However, by the beginning of September Napoleon reached within 70 miles of the capital. Here, at Borodino, he confronted the Russian army and just managed to gain a narrow victory in a ferocious, bloody battle along a three mile front. The Russians eventually retreated and the Grande Armée entered Moscow a week later. Here again, vast areas of the city had been laid to waste, providing little shelter as winter began to set in. Nor, to Napoleon’s surprise, was Alexander prepared to negotiate. The “French” army suddenly found itself marooned, situated hundreds of miles inside hostile territory and confronted by bitter winds and falling snow. Napoleon had no alternative but to order a retreat. 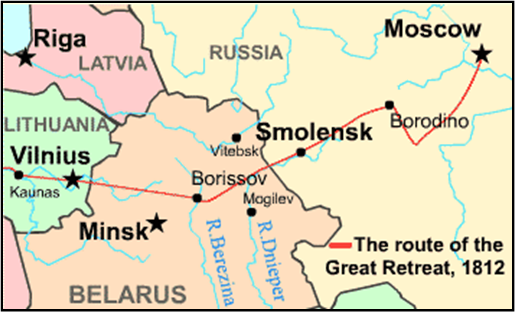 xxxxxThe retreat from Moscow began on the 19th October 1812. It has gone down in history as a military disaster without parallel. Facing the severe winter conditions and constantly harried by Cossacks, it is estimated that some 380,000 men died from the cold or enemy action. Forced to eat their horses because of lack of food, and discarding their guns and equipment en route to make the going lighter, the pathetic remnants of Napoleon’s great army limped westward, reaching the Berezina River at Borissov six weeks later in the last week of November. Here, while a bridge was being constructed, another 24,000 men lost their lives. And many who survived the crossing and eventually reached safety later died of severe frostbite. Despite Napoleon’s subsequent efforts to raise a new army, his nation never recovered from this debacle. There were still some victories to be won, but the tide had finally turned against the all-conquering French.

xxxxxThe news of this unprecedented disaster gave new hope to the oppressed people of Europe, and made inevitable a new alliance against France. The Austrians withdrew their contingent from what was left of Napoleon’s army, the Prussians deserted almost to a man, whilst demonstrations in favour of independence broke out in Italy and many parts of Germany. Nationalism, the feeling which had forged the French Republic and, via an Empire, had taken it to such dizzy heights of power, was now to be the force which would destroy it. Indeed, even in France itself there was mounting discontent and disillusionment with the regime. The people’s enthusiasm for conquest had run its course. Thisxhad been dramatically illustrated as recently as October when an attempt was made by one of Napoleon’s generals, Claude François de Malet (1754-1812), to seize power. Announcing that the emperor had been killed in battle, he set up a provisional government. His plot was soon unmasked, and he was arrested and executed, but it was because he feared further conspiracy against him that Napoleon left his bedraggled army early in December and hastened to Paris. Here he tightened his grip on the affairs of state and began raising a new army.

xxxxxItxsays much for Napoleon’s determination and resourcefulness that the following year, faced with an offensive by Russia and Prussia, he was able to defeat them both at the Battles of Lutzen, Bautzen and Dresden. But his army was only a shadow of its former self. In August 1813 Austria also declared war on France, called to arms by a Tsar who wished to free the enslaved people of Europe. “Napoleon or I,” Alexander declared, “We cannot reign together”. As we shall see, the Battle of Leipzig which followed in October 1813, - often called the “Battle of the Nations” - decided that issue, or so it appeared at the time.

xxxxxIncidentally, of the huge army that invaded Russia less than half were French. The remainder came from all over Napoleon’s empire, including the satellite states of Spain, Holland, Italy, Prussia and Poland. The invasion force took with it thousands of guns, about 150,000 horses, and wagonloads of food, ammunition and bridge-building material. ……

xxxxx…… Duringxthe retreat, Napoleon’s surgeon, Baron Dominique-Jean Larrey (1766-1842) (illustrated), introduced a local anaesthetic by freezing limbs before amputating them. As surgeon-in-chief of the Grande Armée, he served in all of Napoleon’s major battles, and came to be regarded as one of the greatest military surgeons of all time. Apart from his skill in surgical work, he made advances in the study of the eye disease trachoma in 1802 and, ten years later, published the first description of trench foot. He was captured at the Battle of Waterloo and sentenced to death, but was reprieved by the intervention of the Prussian General Gebhard Leberecht Blücher. ……

xxxxx…… Thexpainting above - Napoleon’s Retreat from Moscow - was by the German artist Adolf Northen (1828-1876). Known chiefly for his battle scenes, his other major work was The Prussian Attack, an event from the Battle of Waterloo. ……

xxxxx…… InxGermany at this time, the cry for independence was led by the poet and patriot Ernst Moritz Arndt (1769-1860). His Spirit of the Times, published in 1808, called upon his fellow countryman to rise up against the French. To escape the wrath of Napoleon, he was then obliged to flee to Sweden. From there he carried on his campaign, writing pamphlet after pamphlet full of hatred for the French, and producing some stirring patriotic songs. Dubbed “the most German of all Germans”, he took an active part in politics after the revolution of 1848. As a poet he composed some religious poems of great beauty. A monument to his memory was erected at Bonn five years after his death.