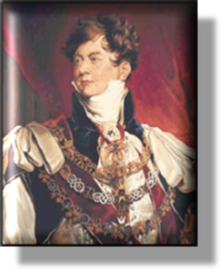 xxxxxWhen the Prince Regent finally became king following the death of his father, George III, his reign as monarch began with a public scandal. His estranged wife, Caroline, returned to England to claim her rights as Queen, and in July 1821 was prevented from attending her Coronation ceremony, being literally turned away from the doors of Westminster Abbey. This action, taken by a man who had already gained a well-earned reputation as a womaniser, drunkard and impulsive gambler, caused a public outcry, and there were numerous demonstrations against the new monarch. His subsequent attempts to have his marriage dissolved ended in failure, and - despite her own indiscretions - the British parliament promptly awarded the Queen an annuity of £50,000. In fact, it proved a gesture in kind only, because she died suddenly in August of that year. (The portrait, detail only, is by the English artist Thomas Lawrence, painted some years earlier.)

xxxxxAs we have seen, both as the Prince of Wales and the Prince Regent (1811 G3c) the new king, George IV, had hardly endeared himself to the British public. Indeed, his degenerate lifestyle, his illegal marriage to the Roman Catholic widow Maria Fitzherbert, and his personal extravagance, was to make him one of the most disliked of all British monarchs. At the age of 58 he was bloated by self-indulgence - at a time of widespread deprivation - and his liking for alcohol and the drug laudanum (ostensibly taken for his gout) had already brought lapses into mild insanity. Eventually, entering into a fanciful world - he often claimed to have fought at Waterloo - he became a virtual recluse at Windsor Castle and died there in 1830.

xxxxxHis passing was not mourned and that is hardly surprising. His rebellious nature might well have been a reaction against his strict upbringing, but that could in no way be a total excuse for his dissipated life style, his open antagonism towards his father - highly popular in his declining years - and the despicable way in which he treated his wife, Caroline of Brunswick-Luneburg. And whilst he possessed some redeeming features, these were born of his extravagant life-style, and were not regarded as laudable in his day. For example, he was genuinely interested in literature and the arts. He admired the works of Sir Walter Scott and Jane Austen, and he gave his support to the founding of the National Gallery, now in Trafalgar Square. He encouraged British artists and added paintings by Joshua Reynolds, Thomas Gainsborough and John Constable to the royal collection. And, above all, he was responsible for the Regency period in architecture, due in the main to the extensive work carried out by the architect John Nash. Among his creations were Regent Street, Regent’s Park and its environs, and the exotic Roy 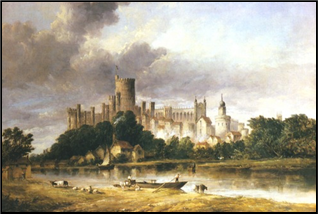 al Pavilion at Brighton. In addition, Windsor Castle was given a bold and imaginative new exterior, and the interior was transformed into one of the finest palaces in Europe. Unfortunately, whilst the nation was the long term beneficiary of such grandiose schemes, at a time of extreme social hardship these architectural projects were seen as wildly extravagant and wholly unjustified. It is perhaps not surprising that an attempt was made upon his life in 1817, and that public discontent should spill over in the so-called Massacre of Peterloo two years later.

xxxxxAs far as the government of the nation was concerned, his reign saw a moderate move towards social and legal reform. Under prime minister Robert Peel - famed for his establishment of London’s first regular police force in 1829 - certain issues were resolved. In that same year, for example, the Catholic Emancipation Bill proved an important step in the right direction, giving Catholics the right to vote, hold public office, and be Members of Parliament. The Bill was eventually passed but, it was delayed for some time by the king’s opposition, despite his general apathy towards all things political.

xxxxxAnd by now a move was also afoot to bring about electoral reform, long overdue. A legacy from the past, for example, was the existence of “pocket boroughs”, where members of Parliament were simply nominated to a seat in the House. And there were, too, “rotten boroughs”, phantom constituencies which represented few if any electors. By such methods there was little difficulty in the wealthy buying a seat in parliament. It was to bring about change in this direction that the so-called Cato Street Conspiracy was hatched. An ambitious plot which planned to assassinate the entire cabinet, it was unearthed in May 1820 before it got under way. Its extremism lost moderate support for revision, but it played a part in bringing about the reform bill of 1832 (W4).

xxxxxMeanwhile, on the continent, the movement for social and political reform which had been ignited by the French Revolution lay simmering beneath the surface. The settlement at Vienna in 1815 had managed to put the clock back, and by the Congress System and the Holy Alliance the forces of reaction hoped to keep it that way. But they did not succeed in South America, and, as we shall see, changes were also afoot in France by 1830 (W4). These were to prove but a prelude to the Year of Revolutions which was to engulf the continent in 1848 (Va). The Congress of Vienna managed to save Europe from a major conflagration for close on a hundred years, but, in the long term, it could not prevent the march towards liberalisation - in some quarters.

xxxxxIncidentally, the novelist Jane Austen strongly condemned the king’s treatment of his wife. Of the Queen she wrote: “Poor woman, I shall support her as long as I can, because she is a Woman, and because I hate her Husband…. a Man whom she must detest.” Nor was the Duke of Wellington, prime minister for the period 1828-1830, any less complimentary. He spoke of the king and his two brothers as “the damndest millstones that can be imagined around the neck of any Government”.