xxxxxItaly’s greatest novelist Alessandro Manzoni wrote his masterpiece The Betrothed in 1827, an historical romance which gained him a European reputation, and firmly established the standard for modern Italian prose. Set in Milan during the Spanish occupation of the 17th century, it centred around the struggle of two young lovers to find happiness together. The patriotic fervour it engendered influenced the national movement of his own day against Austrian domination, and its religious piety emphasised the need to put one’s trust in divine providence. Among his other works were his Fifth of May in 1822 to mark Napoleon’s death, a series of religious poems called Sacred Hymns, completed in the same year, and two romantic tragedies, The Count of Caramagnola in 1820 and Adelchi, two years later. Regarded as the leader of Italian Romanticism, he was an ardent patriot and became a senator when the kingdom of Italy was finally established in 1861. During his career he did much to improve Italian prose and thus widen its readership. 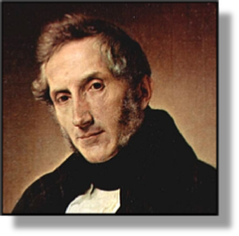 xxxxxItaly’s greatest novelist, Alessandro Manzoni, wrote his masterpiece, The Betrothed, in 1827. An historical romance set in Milan during the Spanish occupation of the 17th century, he revised the text in 1842. Admired for the quality of its dialogue, its superb characterisation, and its clear, decisive prose, it made him a respected and admired writer throughout Europe. Firmly setting the standard for modern Italian prose, the novel has been translated into many languages, and has come to be regarded as one of the outstanding works in world literature.

xxxxxManzoni was born in Milan, but at the age of 20 he went to Paris to join his mother. It was here that he came in contact with and imbibed the ideals of the Romantic Movement. A relapsed Roman Catholic, he returned to the Church in 1810, and from then on his strong religious beliefs coloured all that he wrote. Amongst his works as a poet and dramatist was his celebrated The Fifth of May, an ode to mark Napoleon’s death. Written in 1822, it was much admired by Johann Wolfgang von Goethe - who translated it into German - and it brought him to the notice of the literary world in Italy and beyond. In the same year he completed his Sacred Hymns, a series of religious poems on the major church festivals. As a playwright he is mostly remembered for two romantic tragedies in verse, produced in the early 1820s and owing something to Shakespearean drama. The Count of Caramagnola of 1820 is centred around the exploits of a leader of a troop of mercenaries during conflict between the city states of Venice and Milan in the 15th century, whilst Adelchi, performed in 1822, is a dramatic piece about Charlemagne’s conquest of the Lombard Kingdom in northern Italy. 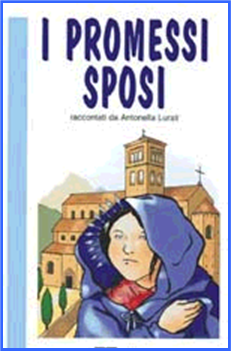 xxxxxThe dominant themes of these two dramas, namely religious piety and patriotic fervour, are taken up in The Betrothed in 1827 (I Promessi Sposi). In this, his major work of three volumes, he traces with much feeling the struggle and misfortunes of two young poverty-stricken silk weavers who wish to marry but are prevented from doing so - until the last chapter that is - by the Spaniard Don Rodrigo, a local tyrant. Set in 17th century Milan, it records with stark realism the popular rebellion which broke out there against Spanish rule during the years 1628 to 1631, together with a vivid description of the plague which struck the city at this same time. But it is more than a charming love story acted out amid turbulent times and graced by a happy ending - due in large part to the courageous support of a local friar. It drew a powerful parallel with the Italy of his day, still under Austrian domination, providing a call to patriotism at the very time when the Risorgimento, the Italian unification movement, was growing in strength. But this said, its overriding religious message was likewise clear, the need to understand and accept life’s evils, trusting in divine providence for the ultimate triumph of good.

xxxxxIt is little wonder that Manzini should be regarded today as the father of the modern Italian novel. He is also seen as the leader of Italian romanticism - the various facets of which he defended in his Letter on Romanticism of 1823. As an ardent patriot he was to take part in an unsuccessful revolt in Milan in 1848, the Year of Revolutions, and when the new kingdom of Italy was eventually founded in 1861, he was made a senator in the country’s legislative body. Much revered in his later life, he died in

xxxxxIncidentally, the famed Italian opera composer Giuseppe Verdi wrote his Requiem Mass of 1874 in memory of Manzoni. It is for this reason that it is sometimes called the “Manzoni Requiem”. ……

xxxxx…… Manzoni was also deeply concerned with the development of the Italian language. Throughout his career he worked for a return to the Florentine vernacular, purged of vocabulary which had been introduced from other regions. In the 1820s he wrote his novel The Betrothed as close as 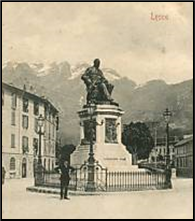 possible to this idiom so that it might be the more clearly understood by a wider readership, and, with this in mind, he improved the text further in his definitive edition of 1842. The resulting prose, clear and effective, became the model for many Italian writers of the future. ……

xxxxx…… Although historically The Betrothed took place in Milan, the town of Lecco in Lombardy, plus its surrounding area, provided the setting for the novel. As a consequence there is a monument to Manzoni in the town (illustrated).