xxxxxTurkish rule over Egypt was established by Selim I in 1517 (H8), and remained in force until Napoleon invaded the country in 1798 (G3b). He defeated the Turks at the Battle of the Pyramids, but his stay was cut short by Nelson’s victory at the Battle of the Nile, which destroyed the French fleet and left his army stranded. With the departure of the French in 1801, and the British in 1802, there followed a power struggle from which Muhammad Ali, an Albanian officer serving in the Ottoman forces, emerged the victor. The Sultan recognised him as their viceroy in Egypt in 1805, and he quickly seized control, killing the leading Mamluk leaders, and reorganising his army and navy on European lines. After seven years of bitter fighting he gained control of Arabia in 1818, and then in 1820 attacked the Sudan, taking the northern region of the country. Four years later, to assist the Sultan, he sent his army to Greece to put down the Greek fight for independence, started in 1821. Such was his success that the Russians, British and French came out in support of the Greeks, and forced him to withdraw his army. But this did not end his policy of expansion. In 1831(W4) he took over Syria from the Ottoman Turks and although, as we shall see, he was forced to give up his conquest in 1840 (Va), he was made hereditary leader of Egypt the following year. And by that time he had introduced a series of domestic reforms which had laid the foundation of the modern Egypt, and established a dynasty which remained in power until 1953. 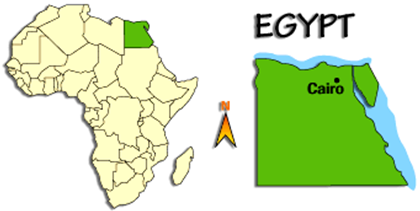 xxxxxAs we have seen, the rule of the Turkish Ottomans was established in Egypt by Selim I in 1517 (H8), and it remained in force until the end of the 18th century - though by then power had become vested in the Mamluks, the leading beys or governors. It was at that time, in 1798 (G3b), that the French general, Napoleon Bonaparte, arrived with his army. His aim was threefold. To strike a blow against British trade, to threaten British possessions in India, and to gain a good bargaining counter for when the British were forced to the negotiating table. And doubtless lurking somewhere in Napoleon’s mind was a secret, romantic desire to carve out for France an empire in the sun with himself - who else? - as the emperor!

xxxxxHe succeeded in defeating the Egyptian army at the Battle of the Pyramids, but his attempt to govern the country, however laudable his intentions, aroused much opposition. There was general resentment against foreign interference. Furthermore, his stay was cut short by Nelson’s victory at the Battle of the Nile, which destroyed the French fleet and left his army stranded. After an unsuccessful attempt to capture Acre and conquer Syria, he again defeated the Egyptians - this time at the Battle of Aboukir in 1799 - but was then obliged to return to France, leaving his army marooned in North Africa. It was later expelled from Egypt in 1801 following the arrival of two British expeditionary forces (one from India), and Ottoman troops coming from Syria. 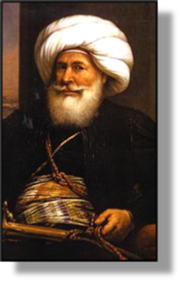 xxxxxThe French occupation of Egypt, brief though it was, had a significant impact on the country’s future, bringing it for the first time into the orbit of European politics and making it a future bone of contention between France and Britain. Once the French had been expelled in 1801, however, the British soon left - in accordance with the Peace of Amiens - and the inevitable power struggle then began. Out of this fierce, complicated clash of rival factions emerged Muhammad Ali (1769 - 1849) (illustrated), an Albanian officer serving in the Ottoman forces. He quickly strengthened his hold on the country and in 1805, the Sultan, Mahmud II, anxious to maintain Turkish control of Egypt, readily accepted him as the new governor with the rank of pasha.

xxxxxOnce officially recognised, the new viceroy massacred the bulk of the Mamluks - the ruling aristocracy who posed the one remaining threat to his authority - and set about reorganising Egypt’s army and navy on European lines, replacing many Turkish and Albanian mercenaries with Arabs and black Africans to ensure greater loyalty. Then, having repulsed a British expeditionary force that landed in Alexandria in 1807, he embarked upon a policy of military expansion. 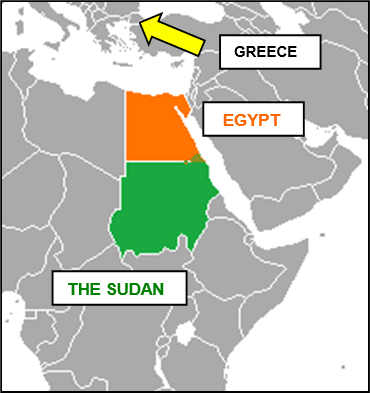 To gain control of the local slave trade and push out his frontiers, in 1811 he launched a war against the Wahhabis, an heretical Muslim group which had occupied the holy cities of Mecca and Medina in Arabia. After a bitter conflict, the campaign was successfully concluded by his son, Ibrahim Pasha in 1818. Then in 1820 he sent an army up the Nile to attack The Sudan. The northern region of that country was conquered within two years, and in 1823 the city of Khartoum was founded.

xxxxxThen in 1824, given the promise by the Sultan of more territorial gains, he played a prominent role in a war for independence which had been raging in Greece since 1821. Via a fleet of sixty vessels he sent an army to mainland Greece (arrowed on map) to assist in the overthrow of the Greek insurgents. Commanded by Ibrahim Pasha, it had overrun most of the Morea (the Peloponnese peninsular of southern Greece) in less than two years. But the rapid success of this military operation was sufficient to alarm a number of European states. The Russians, British and French came out in support of Greece, and in 1827 won the Battle of Navarino (now Pilos) against a combined Turko-Egyptian fleet. Faced with such opposition, Muhammad Ali had to agree to the withdrawal of his army.

xxxxxHowever, this setback in no way put an end to his expansionist policies. Indeed, in 1831 he took on his Turkish overlord and became master of Syria for close on ten years. As we shall see, he was obliged to give up this conquest in 1840 (Va), but not before he had gained recognition as the hereditary ruler of Egypt - the start of a dynasty that remained in power until 1953. And the next twenty years were also to bring sweeping reforms in government administration and agriculture - a domestic policy which, despite its shortcomings, was to lay the foundations of modern Egypt.

xxxxxIt was in the early 1820s, when Muhammad Ali began his invasion of the Sudan, that the country was visited by the German naturalist Christian Gottfried Ehrenberg (1795-1876). After graduating as a doctor from Berlin University in 1818, he joined a scientific expedition that took him to Egypt, Libya, The Sudan, and the Red Sea. He collected a vast number of specimens, and managed to return home in 1825, but such were the conditions encountered during the journey that many of the expedition died of fever. Four years later, together with the German scientist and explorer Alexander von Humboldt, he went on an expedition to central Asia and Siberia, financed by Tsar Nicholas I of Russia, making a special study of the Ural Mountains en route. 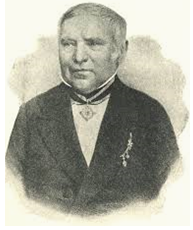 xxxxxEhrenberg was the first biologist to make a study of fossil microorganisms - the science of micropalaeontology - and during his career he collected some 46,000 plant and 34,000 animal specimens for his own university and the Prussian Academy of Sciences. He did some pioneer work in the structure and life history of coral, and, among his findings, proved that fungi developed from spores, and that phosphorescence in the sea was caused by planktonic microorganisms. His major works were Travels in Egypt, Libya, Nubia and 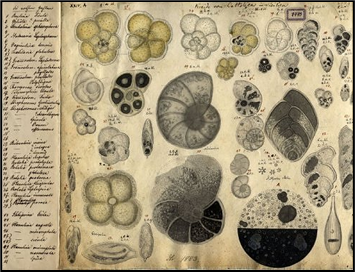 Dongola, published in 1828, and his The Infusoria (i.e.Protozoa) as Complete Organisms, produced ten years later, a treatise in which he argued that all animals, regardless of size, have complete organ systems, such as stomachs and sex organs. Illustrated here is one of the original, detailed sketches of unicellular organisms, produced mostly during the 1830s.

xxxxxHe was elected a foreign member of the Royal Society in 1837 and, two years later, won the Wollaston Medal, the highest prize awarded by the Geological Society of London. The “Ehrenberg Collection” at Berlin University includes 40,000 microscopic preparations, 5,000 raw samples, and some 3,000 pencil and ink drawings.

xxxxxIncidentally, the city of Khartoum in The Sudan was so named because it was established near the confluence of the Blue and White Nile on a spit of land which resembled an elephant’s trunk - khurtum in Sudanese.

xxxxxIt was in 1820, the year Muhammad Ali invaded the Sudan, that the German naturalist Christian Gottfried Ehrenberg (1795-1876) joined a scientific expedition to Egypt, Libya, The Sudan and the Red Sea. He returned in 1825 and, four years later, joined the German scientist and explorer Alexander von Humboldt on a journey to central Asia and Siberia. During his career he made a special study of fossil microogranisms - the science of micropalaeontology - and collected some 46,000 plant and 34,000 animal specimens. He did some pioneer work in the structure and life history of coral, and proved that fungi developed from spores. His major works were Travels in Egypt, Libya, Nubia and Dongola, published in 1828, and his The Infusoria (i.e.Protozoa) as Complete Organisms, produced ten years later.