xxxxxAs we have seen (1798 G3b), the ancient Rosetta Stone, inscribed with a passage in hieroglyphics, was discovered by the French in Egypt in 1799 and confiscated by the British in 1801. A number of scholars attempted to decipher the script, including the English physicist Thomas Young, but it was the French linguist Jean François Champollion (1790-1832) who eventually made the full translation. Professor of history at Grenoble Lyceum, he deciphered the text in 1822, and published his findings in Summary of the Hieroglyphic System two years later. He then went on to lead an expedition to Egypt in 1828 to study inscriptions and collect antiquities. He wrote a number of works on Egypt, and served as curator of the Egyptian collection at the Louvre, and professor of Egyptian antiquities at the Collège de France. 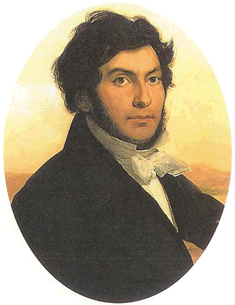 xxxxxAs we have seen (1798 G3b), it was in 1799 that a French artillery officer serving in Egypt found a slab of basalt embedded in a wall near the town of Rosetta (now called Rashid) in the Nile delta. Dating from the 2nd century BC, this “Rosetta Stone”, as it came to be called, had inscribed on it a passage of the same text in three versions - Greek, hieroglyphic and demotic script - and it was to become the key to deciphering other Egyptian inscriptions. Following the withdrawal of the French army from Egypt in 1801, the stone was confiscated by the British (“by the fortunes of war” as they put it!) and placed in the British Museum the following year.

xxxxxOverxthe next few years two scholars in particular made some progress in deciphering the text (from prints made from the stone’s inscriptions). The Frenchman Silvestre de Sacy (1758-1838) identified some of the names in the demotic text, and the Swedish diplomat, Johan David Akerblad (1763-1819) worked out the phonetic value of some of the signs. Then around 1814 the English physicist and physician Thomas Young, a keen student of Egyptology, identified five of the hieroglyphics, and established the sequence in which the signs were to be read. But it was the French linguist and historian Jean François Champollion (1790-1832) who eventually succeeded in producing a full translation. 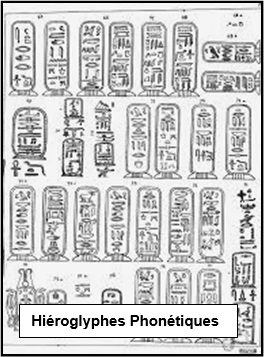 xxxxxAt the age of 19, Champollion became professor of history at the Lyceum at Grenoble, and it was from this time onwards that he began deciphering hieroglyphics in earnest, making a close study of the text of the Rosetta Stone. It became virtually an obsession, and involved him in long years of work and many frustrations. He was assisted by his sound knowledge of ancient languages, but it was not until 1821, in fact, that he began publishing papers on his findings. However, by the following year, 1822, he had translated all the hieroglyphic signs into their Greek equivalents, having come to realise - the first to do so - that some of the signs were alphabetic, some syllabic, and some were related to previous ideas or objects. The way was now open to arrive at a complete understanding of all the hieroglyphic signs, and to begin a meaningful study of Egyptian archaeology.

xxxxxIn 1826, on the strength of his discoveries, he was appointed curator of the Egyptian collection at the Louvre and, two years later, led an archaeological expedition to Egypt to copy inscriptions on ancient monuments, and collect antiquities. On his return he was made professor of Egyptian antiquities at the Collège de France, a chair created in his honour, and elected to the French Academy. Sadly, in 1832 he died of a stroke, aged 41, and was buried in the Père Lachaise cemetery in Paris.

xxxxxApart from his Summary of the Hieroglyphic System, written in 1824, he went on to produce a Collection of the Mythological Figures of Ancient Egypt (1823-25) and, based on his findings, compiled an Egyptian grammar and dictionary, both published after his death. He also wrote two earlier books: his Introduction to Egypt under the Pharaohs, of 1811, and his Egypt of the Pharaohs, three years later.

xxxxxIncidentally, we are told that when Champollion eventually broke the code, making out the word Rameses, he dashed into his brother’s study and, shouting Je tiens l’affaire! (“I’ve got it!), promptly collapsed. He was confined to his bed for the best part of a week! ……

xxxxx…… Thexfirst major breakthrough in the deciphering of the wedge-like cuneiform script used in ancient Persia was made some years earlier by the German scholar Georg Friedrich Grotefend (1775-1853). He presented his findings to the Gottingen Academy in 1802 after studying texts copied from Persepolis - the ancient capital of Iran - by the German explorer Carsten Niebuhr. After further research by other scholars, the script was finally deciphered in 1846 and, as in the case of hieroglyphics, enabled systematic archaeological excavation to take place at sites in the Near East later in the century.

Champollion: by the French portrait painter Léon Cogniet (1794-1880), 1831 – The Louvre, Paris. Hieroglyphics: contained in a letter written by Champollion in 1822 – National Library of France, Paris.