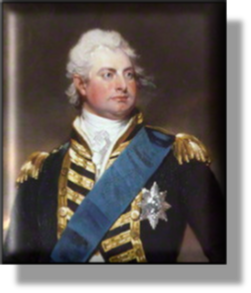 xxxxxWilliam IV succeeded to the throne of Great Britain and Ireland (and became king of Hanover) on the death of his brother George IV. He served in the Royal Navy for some years, joining at the age of 14 and seeing service under Admiral Nelson. As a consequence he acquired the nickname of the “Sailor King”. Though somewhat gruff and vulgar at times, he was a breezy, uncomplicated character who tended to speak his mind, a trait which won him a measure of popularity among the general public. He was by no means as talented and politically astute as his brother George, but he led a far less dissolute and extravagant life - though he did have ten children (the FitzClarences) by his mistress, an Irish actress named Dorothea Jordan! He was made Duke of Clarence in 1789, and became heir to the throne following the death of his niece Charlotte in 1817. With this in mind, he married the German princess Adelaide of Saxe-Meiningen the following year. They had two daughters, but they both died in infancy.

xxxxxHis reign was peaceful in the sense that there was no involvement in war, but it was very troubled nonetheless, due to the widespread political unrest and social distress which continued unabated in the wake of the Napoleonic Wars. As we shall see, the first major event of his reign was the prolonged and difficult passage of the first Reform Bill, eventually passed in 1832. He was plunged into this crisis very soon after taking the throne. He possessed very little political judgement and, initially, tended to oppose any reform measures. Eventually, however, fearing a nation-wide insurrection, he played his necessary part in forcing the reactionary Tory party to accept a slightly watered-down version of the original bill. By it the franchise was increased and representation in the House of Commons was more fairly distributed, the first tentative steps towards a more acceptable parliamentary democracy. 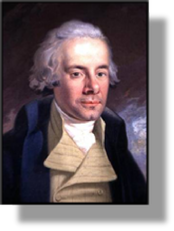 xxxxxHis reign also saw the passing of some significant social measures. The Factory Act in 1833, for example, outlawed the worst abuses of child labour, and the following year, the new Poor Law introduced the workhouse system in an attempt to meet the needs of the most deprived members of society. And despite the harsh punishment meted out to the Tolpuddle Martyrs - perhaps because of it - the trade union movement began to gather strength. And after a long and arduous campaign, led in the Commons by William Wilberforce (illustrated), 1833 saw the abolition of the slave trade in all British possessions, though its provisos took some years to work through. 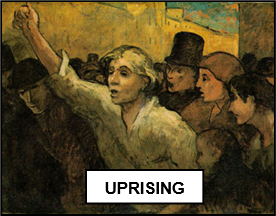 xxxxxThe political and social unrest which triggered off these measures of reform, potentially threatening in their own right, loomed much larger because of events taking place on the continent during this reign. The July Revolution in France, in which Charles X was toppled from power in 1830, gave notice to the British government, as did the rebellions in Poland and Germany, unsuccessful though they were, that the power of the people was beginning to be felt, and was to be ignored at a nation’s peril. This said, the British government remained committed to self-determination. Lord Palmerston played an important part in securing and guaranteeing the independence of Belgium once the Belgians had overthrown their Dutch masters in 1831.

xxxxxWilliam IV was the last British monarch to attempt to dismiss a prime minister (Lord Melbourne in 1834) and install one of his own choice. To this dubious claim to fame must be added his inability - despite a determined effort - to throttle the Reform Bill of 1832 at its birth. When he died in June 1837, there died with him the last remnants of autocratic rule by a British monarch. Future kings and queens were to make their influence felt in the corridors of power, but never at the expense of parliamentary democracy - although Queen Victoria came close to it at times!

xxxxxIncidentally, William’s wife Adelaide was much admired for her modesty and for her charity work. The city of Adelaide, capital of South Australia, was named after her.