xxxxxThe Japanese artist Katsushika Hokusai, like Kitagawa Utamaro before him (1794 G3a), was a major exponent of ukiyo-e, “pictures of the floating world”. He is specially known for his Thirty-six Views of Mount Fuji, completed in 1833 and, two years later his monochrome One Hundred Views of Mount Fuji. Equally as attractive were his delightful series Tour of the Waterfalls of the Various Provinces, and his prints on a wide range of everyday subjects. Skilled in both wood engraving and colour block printing, he gained fame as a book illustrator, his major work being his Ten Thousand Sketches, an illustrated encyclopaedia of 13 volumes. Curved lines gave his prints a feeling of freedom, and his experiments in colouring provided some unorthodox combinations. He and his contemporary Ando Hiroshige dominated Japanese art at this time, and his work influenced many impressionist and post-impressionist artists in the West, including the Frenchmen Monet, Degas and Toulouse-Lautrec and the American Whistler. A prodigious worker, it is estimated that he produced some 30,000 prints, paintings and sketches. 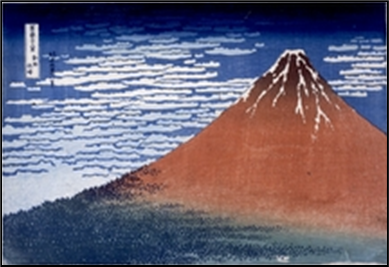 xxxxxThe Japanese artist Katsushika Hokusai, one of the foremost printmakers of his time, was, like Kitagawa Utamaro before him (1794 G3a), a major exponent of ukiyo-e, “pictures of the floating world”. He is known above all for his prints of Mount Fuji. He completed his Thirty-six Views of Mount Fuji, a series of block prints, around 1833, and two years later published his monochrome One Hundred Views of Mount Fuji, a work in three volumes. Equally as attractive, however, was his delightful series Tour of the Waterfalls of the Various Provinces, finished about 1833, and his prints on a wide range of subjects, including scenes of everyday life and paintings of birds and flowers. 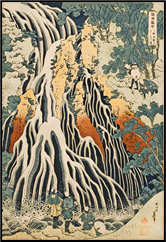 xxxxxHe was born in Edo (now Tokyo) and, after learning the art of wood engraving, turned his hand to painting and colour block printing. It was with these combined skills that he started work as a book illustrator and quickly made a name for himself. To this period, around the turn of the century, belong a vast number of illustrations for books on various subjects - such as histories and anthologies - and also his surimono work, the production of small “printed things” such as private invitations, greetings and musical programmes, all tastefully produced as and when required. Then in 1814 he began one of his major works, his Ten Thousand Sketches, a 13-volume illustrated encyclopedia which provided ample proof of his talent as a draughtsman. Nor was he averse to going public. At times he would produce vast paintings, sometimes as large as 2000 square feet, to mark festive occasions in Edo and Nagoya, a city in central Honshu. 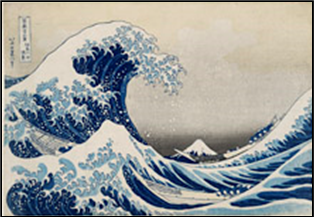 xxxxxHis painting style was characterised by a liking for curved lines, which gave his work a refreshing feeling of freedom, and he was prepared to experiment with colour, thereby coming up with some unorthodox combinations. His output was quite incredible. It is estimated that he produced no less than 30,000 prints, paintings and sketches. Notable among these were his views of waterfalls and famous bridges. This version of The Wave of Kanagawa (illustrated here) is a good example of his work, and can be seen in the British Museum in London. Hokusai was one of the outstanding artists in Japan during the first half of the 19th century, and his work, together with that of others (particularly Ando Hiroshige), was greatly admired in the Western art world. His simple design and decorative colouring influenced many impressionist and post-impressionist artists, such as the Frenchmen Claude Monet, Edgar Degas and Henri Toulouse-Lautrec, as well as the versatile American painter and etcher James Whistler. Shown below are Hibiscus and sparrow, Rural Landscape, and People crossing Arched Bridge.

xxxxxAndo Hiroshige (1797-1858) was inspired to become an artist after seeing some works by Katsushika Hokusai. Like him (and Utamaro earlier) he was a foremost exponent of ukiyo-e, “pictures of the floating world”. After producing traditional prints of attractive women, kabuki actors and samurai, he turned to landscape painting, and this brought him fame and fortune. Among his most lyrical scenes were Fifty-three stages of the Tokaido, the road from Edo to Kyoto, Celebrated Places in Japan, Sixty-nine stages of the Kiso Highway, and Famous Places in Kyoto. These sensitive, refined landscapes had a marked influence on Western art. They were admired by many avant-garde artists, including the Dutch post impressionist Van Gogh. Of the 5,000 prints he produced, a large number were of birds and flowers. 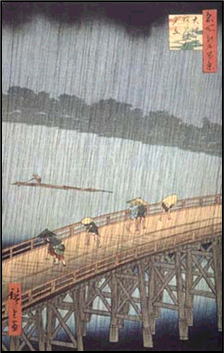 xxxxxTowards the end of his life, when the quality of his work had somewhat declined, he embarked upon another ambitious project, 100 Famous Views of Edo, but he not live long enough to complete it. Nonetheless, during his career he is thought to have produced over 5,000 prints, including a thousand or more exquisite bird-and-flower prints. Today, however he is remembered above all for his landscapes. These proved extremely popular, depicting in a sensitive, refined way the well-known landmarks of the Japanese countryside, captured in a variety of romantic moods. Many of these and his earlier works are to be seen in collections throughout Europe and America, and they had a marked influence on Western art. Like Hokusai, his simple designs and attractive colours were admired by a large number of avant-garde artists, including the Dutch post-impressionist Van Gogh. He made a copy of his woodcut Ohashi, Bridge in the Rain, (here illustrated) to assist him in his own work.

xxxxxIncidentally, it was around 1811 that Hiroshige began his training and became a pupil of the famous ukiyo-e master Utagawa Toyohiro. On graduation he took on his teacher’s name - as was the custom - and from then on signed his work Utagawa Hiroshige.

xxxxxIncidentally, Hokusai appears to have been a somewhat restless character. It is said that during his long career he moved home more than ninety times! 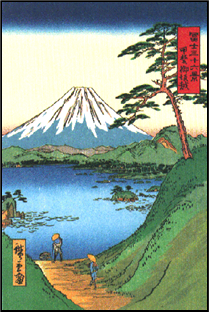 xxxxxA man who, we are told, was inspired by the work of Katsushika Hokusai was Ando Hiroshige (1797-1858), an artist who became one of the great Japanese masters of the colour wood-block printing. Like Hokusai (and Utamaro before him), he was another leading exponent of ukiyo-e prints, meaning “pictures of the floating world”. 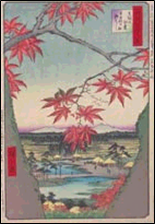 xxxxxHiroshige was born in Edo (today’s Tokyo). As a young man he worked as a fire warden, like his father, but was determined to become an artist after seeing some prints by Hokusai. After a professional training, he began his career by producing figure prints of young, attractive women, kabuki actors and samurai, but in the late 1820s he moved away from these traditional subjects and specialised in the new genre of landscape prints. This proved the making of him. The lyrical scenes he produced compared favourably with those of Hokusai and brought him instant fame. Admired above all was his masterpiece of 1833, Fifty-three stages of the Tokaido, a series of prints depicting views along the old Tokaidok highway which ran from Edo to the old capital of Kyoto in the south west. Later journeys produced prints illustrating Celebrated Places in Japan, Sixty-nine Stages of the Kiso Highway, Eight Views of Lake Biwa, and Famous Places in Kyoto. In these and other landscape prints (three illustrated below) he often introduced rain, snow, mist and moonlight to add interest and atmosphere to the scene.