xxxxxThe German pioneer in education, Friedrich Froebel, found his vocation when he went to work at a Frankfurt school which based its teaching on the progressive lines put forward by the Swiss educator Johann Pestalozzi. Inspired by this advanced learning method, he worked with Pestalozzi at his boarding school in Yverdon from 1806 to 1810 and then, after an enforced period of military service, opened his “Universal German Educational Institute” at Griesheim in 1816, moving it to Keilhau two years later. There his school quickly gained a reputation for its teaching methods, based on the theory that self-activity and play within a happy environment stimulated a child’s natural development. In 1826 he explained his ideas in his work The Education of Man. Then in 1837 he gained wider recognition with the establishment of his kindergarten, catering for children of pre-school age and using creative play and group activity as the teaching method, enhanced by music, games and various learning materials. He himself produced a popular collection of Mother-Play and Nursery Songs for this purpose. This idea of a “children’s garden” was quickly taken up in countries across Europe, and by the middle of the century was being adopted by advanced nations across the world, and proving particularly popular in the United States. 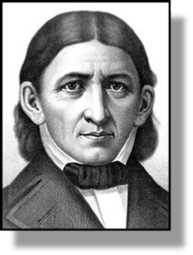 xxxxxFriedrich Froebel was one of the world’s greatest contributors to child education. A disciple of the Swiss reformer Johann Pestalozzi, he believed that children should be encouraged to learn in a happy environment wherein activity and play stimulated natural development. He is particularly remembered for his introduction of the kindergarten, a pre-school education wherein children as young as three are taught by means of creative play and group activity, assisted by songs, games and specially devised learning materials.

xxxxxFroebel was born at Oberweissbach in Thuringia, then in Saxony, the son of a clergyman and one of five children. His early childhood was not a particularly happy one. His mother died when he was only nine months old, and his father appears to have given him little personal attention. He was eventually brought up by an uncle. At school he showed a particular interest in botany and the love of nature, and on completing his somewhat limited education, attended informal classes at Jena University. He then tried his hand at various jobs, including forestry and architecture, before going to teach in a school at Frankfurt. There he found his true vocation. Teaching methods at this school were based on the progressive lines put forward by the Swiss education reformer Johann Pestalozzi, and Froebel quickly came to appreciate their value. Indeed, such was his interest in these methods that two years later he went to visit Pestalozzi at his boarding school at Yverdon in Switzerland. He worked and studied there from 1806 to 1810. 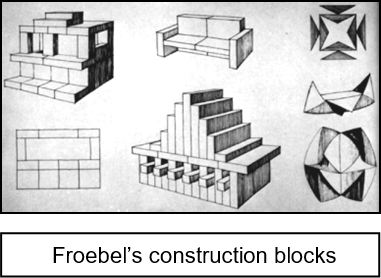 xxxxxInspired by what he saw at Yverdon, but convinced that improvements could be made, he entered the University of Gottingen in 1811. There, unfortunately, his studies were cut short by an enforced period of military service in the Prussian army, then engaged in the Napoleonic Wars. However, during this military interlude he made a number of converts to his own teaching methods, and from 1816 two of them worked with him in what he called his “Universal German Educational Institute”. This special school was established at Griesheim and then, two years later, moved to Keilhau, near Rudolstadt, also in his home state of Thuringia. It was at Keilhau especially that he was able to put his ideas into practice, creating in a comparatively short time an institution with a growing reputation for its advanced ideas on child education. Many teachers visited this school to see at first hand the relaxed atmosphere, the lack of unnecessary restraint, and the importance placed upon self-activity and self expression. It was during this period that, in addition to a large number of articles, he produced his The Education of Man of 1826, a work explaining the methods he was adopting and the philosophy behind them.

xxxxxIn 1831, at the invitation of the Swiss government, he took on the task of training elementary school teachers, working out of an orphan asylum at Burgdorf. When he returned to Keilhau in 1837, he took advantage of this experience and opened up his revolutionary Kindergarten (Children’s Garden) in Blankenburg (illustrated), again in Thuringia. This infant school, designed for children from three to seven years, was well ahead of its time, placing emphasis upon learning activity, and stressing the importance of play in a child’s development. And with this system went the need for what he called “gifts”, a variety of games, toys and stories to encourage experiment and stimulate interest. Among these was his own highly successful collection of Mother-Play and Nursery Songs of 1843, designed to introduce music and song into the learning process.

xxxxxUnfortunately, Froebel’s ideas were too novel to be fully appreciated in their day, and financially he found it difficult to keep the school running. Furthermore, the name Froebel became associated with the socialist and radical views of Froebel’s nephew Julius Froebel, a professor at Zurich. As a consequence, the Prussian government, fearing that 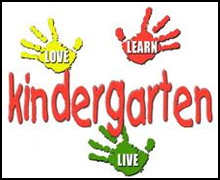 kindergartens were being used for subversive purposes, closed all of them down in 1851. The ban was not lifted until nine years later, well after Froebel’s death. Nevertheless, the idea of the kindergarten caught on, and many such schools were soon in operation across Europe. Later the movement spread across the entire world, and proved particularly popular in the United States.

xxxxxApart from Pestalozzi, Froebel’s ideas on education were influenced by the works of the French social reformer Jean Jacques Rousseau, and by those of the German philosophers Johann Gottlieb Fichte and Friedrich Wilhelm Schelling. A deeply devout man, his emphasis upon the natural growth of a child was religiously motivated. His theories, including as they did the development of co-operation, the harmonious expression of all human activity, and man’s oneness with nature, were intended to help children understand the law of unity that existed between man, god and the natural world. The purpose of education was to help a person become “a pure and perfect representation of that divine inner law through his own personal choice”.

xxxxxAsxnoted earlier, the Froebelian movement proved particularly popular in the United States. The American educator Elizabeth Palmer Peabody (1804-1894) opened one of the first kindergartens at Boston in 1860. She wrote a large number of articles and books on this method of pre-school education and, as editor of the Kindergarten Messenger in the 1870s, did much to promote the spread of kindergartens throughout the United States. 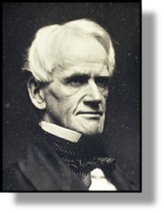 xxxxxAndxanother educator well worthy of mention at this time was her brother-in-law, the lawyer, politician and education reformer Horace Mann (1796-1859). As secretary of the newly established state school board from 1837 to 1848, his campaign for reform did much to raise the standards of public education in his home state of Massachusetts. Public education, he argued, should be free to all, totally non-sectarian, and conducted by professionally trained teachers. In a free society there was no place for any “harsh pedagogy in the classroom”. A man who spent his life in public service, his own valedictory was an education in itself: “I beseech you to treasure up in your hearts these my parting words: Be ashamed to die until you have won some victory for humanity”. 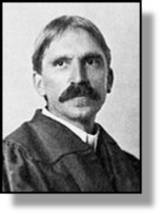 xxxxxLaterxin the century came another outstanding educator, the American philosopher John Dewey (1859-1952). He established a department of pedagogy at the University of Chicago in the 1890s where the progressive educational methods - such as student-centred schools and learning through activity - were based on Froebel’s principles. His first major work on education was The School and Society, published in 1899.

xxxxxIncidentally, John Dewey is not to be confused with Melvil Dewey (1851-1931), the American librarian and educator who introduced the Dewey Decimal System of library classification, an influential system that he made copyright in 1876.