The French philosopher August Comte, founder of sociology, put forward his ideas on positivism in his Course de philosophie positive, begun in 1830. Influenced by the ideas of the French socialist Henri de Saint-Simon, he claimed that humanity had developed in three stages: the Theological, when man gave way to the will of fictitious gods or demons; the Metaphysical, when reality was explained by vague abstractions, like the will of the people; and the Scientific or Positive. In this third and final stage - which mankind was just entering - Comte held that the indisputable facts of science would be used to form a new “science of man” (sociology). This would discover the laws by which a new social order, led by the intellectual élite, could be created. And by this new and last branch of science, the rapid advances being made in industry, politics and science would be reorganised, creating a stable society in which human problems would be solved by the application of proven scientific method. Later, however, in his System of Positive Polity he moved away from this theory by introducing a non-theistic religion which worshipped humanity, the “Great Being”. This idea, employed to encourage good social behaviour, lost him a great deal of support. Nonetheless, his doctrines were later adapted, especially by the likes of the English philosophers John Stuart Mill and Herbert Spencer, and his contribution to the social sciences was influential, as was his concept of positivism, based on the premise that only that which could be scientifically proven was acceptable. 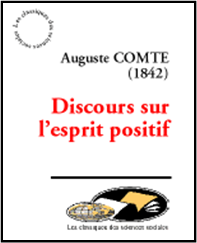 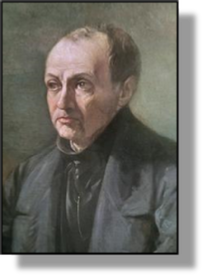 xxxxxThe French philosopher Auguste Comte is regarded as the founder of “sociology”, a term he himself introduced. In his six-volume work Course de philosophie positive, begun in 1830 and completed in 1842, he used a scientific approach termed “positivism” to establish a new intellectual discipline concerned with the structure and development of society. Unfortunately, his radical ideas, envisaging as they did the gradual development of society towards an enlightened age based on the advance of science and industry, were constantly put into question by the political and social turmoil which beset his times. However his personal influence continued in Europe and North America until the early years of the 20th century, and his concept of positivism - the idea that only that which could be proved by scientific fact was acceptable - was adopted by some intellectuals, and developed further by others.

xxxxxComte was born in Montpellier, southern France, the son of a tax collector. A gifted child with a rebellious spirit, he rejected his parents’ Roman Catholic faith and their royalist views, and after two years studying science at the École Polytechnique in Paris, was expelled in 1816 for leading a student revolt. Two years later he began working as secretary to the noted French socialist Henri de Saint-Simon (1760-1825) (until they quarrelled in 1824), and this association had a marked influence upon his thinking. Saint-Simon advanced the idea of an atheist society ruled by the leaders of industry, and this was closely akin to Comte’s own theory that science was the arbitrator of truth, and should be the positive means of studying and improving society.

xxxxxIn 1826 he began a series of lectures to private audiences on what he called his "system of positive philosophy”, but his work was soon interrupted by a severe nervous breakdown. At one time he came near to taking his own life by attempting to drown in the river Seine. However, he recovered in 1827 and continued his lectures before taking up a teaching post at the École Polytechnique. It was then that he began writing his major work. True to form, however, he fell out with the school’s directors in 1842 and lost his post. From then onwards he was largely dependent upon the generosity of his disciples, among whom was the English social philosopher John Stuart Mill. In the last years of his life he suffered from a recurrence of his mental illness.

xxxxxThe main thrust of Comte’s philosophy was the contention that humanity developed in three stages. The first could be termed the Theological Phase when man naively explained his existence by accepting the presence and the will of fictitious gods or demons. Politically speaking, the idea of the divine right of kings was a legacy of this acceptance. The second was the Metaphysical Stage in which reality was explained in vague, abstract terms such as the will of the people, the social contract, and the equality of opportunity. The third and final evolutionary phase - and the one which mankind was in the throes of entering - was the Scientific or Positive Stage. Here, Comte held that irrefutable observations which had been discovered by scientific logic and experiment would be used to investigate and form a new “science of man”. This would discover the laws of human society by which a new social order, led by a scientific and business élite, could be created. Thus Comte saw this final branch of scientific learning (sociology) as the key to a total reorganisation of society in accordance with the rapid advances then being made in industry, politics and science. The result of this reorganisation would be the establishment of a stable society in which human problems would be solved and social conditions improved by the application of proven scientific method. The “right thinking” thereby created would sweep away war and social conflict. 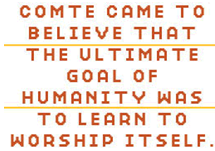 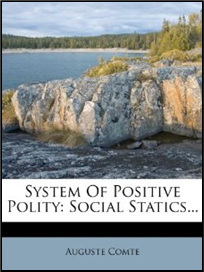 xxxxLater, however, in his four-volume System of Positive Polity, completed in 1854, Comte appeared to abandon his dictate that the empirical sciences were the only adequate source of knowledge. In this work, having become convinced that religion encouraged good social behaviour, he came out in favour of a non-theistic religion which worshipped humanity, the “Great Being”, together with a band of secular “saints” such as Dante and Joan of Arc. In this “Religion of Humanity”, he envisaged a priesthood which, trained in sociology and with himself as the high priest, would guide the people in matters of education and morality and bring an end to war. This departure from his earlier beliefs earned him a great deal of criticism. Such ideas were seen by many as a betrayal of his positivism, and by some as verging on the absurd.

xxxxxComte’s philosophy was not totally convincing in every detail, but he genuinely saw sociology as a tool to make the world a better place. And whilst his immediate disciples were few, his doctrines were later adapted or developed - and especially so in England - by the likes of John Stuart Mill and Herbert Spencer. Furthermore, his contribution to the social sciences was influential, as was his positivism, a concept which was developed over the years, and survives to this day, particularly in the empirical sciences.

xxxxxIncidentally, in 1849 Comte put his mind to calendar reform. He proposed a calendar of 13 months, each with 28 days, and an extra day (a “Year Day”) inserted at the end of December and with an additional leap year day when required. He also suggested that each day should be dedicated to a champion of humanity, an idea he later put forward in his System of Positive Polity. ……

xxxxx…… Comte also created the French word altruisme (altruism in English). Made out of the Italian word altrui, meaning “of or to others”, it is used in philosophy to describe a theory or course of action that has as its ultimate moral aim the good of others. Selfishness is the opposite.