xxxxxAs we have seen, for many years the leaders of Algeria had made a good living out of piracy. The Americans, British and Dutch increased their naval action against their Barbary pirates from the beginning of the century, but in 1830 France went one step further and invaded the country. The French army quickly took Algiers and the coastal strip, but with the fall of Charles X in the July Revolution of that year, the new government had no set plan. Eventually in 1839, after an Algerian force, led by the Amir of Mascara, Abdelkader, had managed to advance near to the coast, it sent in a large army, and by 1847 had gained control of the northern region. However, the eastern region was not subdued until 1857 and the Saharan areas not until 1900. By then there was a growing independence movement, and this received a boost with the defeat of the French in the Second World War (1939-1945). When an Anglo-American force landed in Algeria in 1942, they were seen as liberators by the native population. However, there was a large number of French settlers by that date, and it was not until after the so-called Algerian War, beginning in 1954, that Algeria gained its independence in 1962. The French war in Algeria also spilled over into Morocco. The Sultan gave assistance to Abdelkader in 1844 and, as a result, the French invaded Morocco and soundly defeated the Sultan’s army at the Battle of Isly. By the Treaty of Tangier in 1844 (Va), he had to recognise France’s claim to Algeria. At that stage he managed to preserve his country’s independence but, this was to change with the First Moroccan Crisis and the Algeciras Conference that followed in 1906.

THE FRENCH INVASION OF ALGERIA

xxxxxAlgeria, situated in north-west Africa and with a 600 mile coastline along the Mediterranean Sea, became part of the Ottoman Empire in 1518. However, as part of the Barbary States, its rulers enjoyed a great deal of local autonomy, and for many years they grew rich on piracy. As we have seen, it was not until the early years of the 19th century that naval action by the Americans, British and Dutch began to put an end to these attacks by the Barbary pirates. Then In 1830 France, with a view to permanent occupation, took an even more positive step and launched an invasion of Algeria.

xxxxxIn fact, the French had made a number of earlier attempts to gain control of this North African territory. Over the previous three years they had tried to persuade Muhammed Ali to attack the country on their behalf - though this was hardly an attractive proposition for the Egyptian leader - and they had 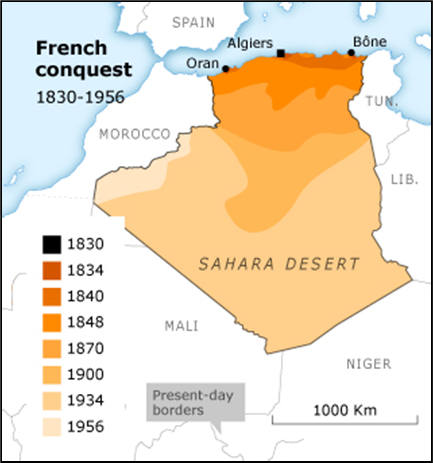 also attempted, unsuccessfully, to impose a naval blockade along the Algerian coast. Eventually convinced that direct action was the only answer, they sent a military force across the Mediterranean in July of 1830. It landed in Algeria and quickly seized the capital city of Algiers. As expected, the local forces were no match for the professional soldiers of the French army. Husayn, the last dey or leader of Algiers quickly surrendered and went into exile, bringing an end to Algeria’s three hundred and more years as a province within the Ottoman Empire.

xxxxxBut, as it turned out, the conquest was very far from over. Just a few days after the French had gained their victory, the July Revolution in Paris toppled the reactionary Charles X from his throne, and replaced him by the more moderate Louis-Philippe, the “citizen king”. As far as Algeria was concerned, it was a recipe for disaster. There followed a prolonged period of governmental indecision followed by an equally prolonged period of military ineptitude. Final conquest of the northern region of the country was not to be achieved, in fact, until 1847, after a period of seventeen years which included years of inactivity, an occasional clash of arms, and a short war with Morocco, Algeria’s western neighbour. 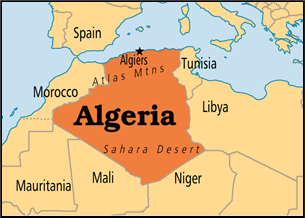 xxxxxThe new French government of 1830, having inherited the Algerian problem, tried to come up with a solution short of complete withdrawal. One was to appoint princes imported from neighbouring Tunisia to govern various parts of the country, but with the French in overall command. This proved impractical. Another was to confine occupation to the coastal areas, where control could be easily maintained, but it was feared that this would encourage rebel attacks from the hinterland. Indeed, such resistance had already begun. The Ottoman Algerian leader Ahmad Bey held out for a number of years from his base at Constantine, a city in the interior. He repulsed a French attack in 1836 before being driven from his stronghold the following year. Inxthe meantime, a more formidable opponent, Abdelkader, the Amir of Mascara (1808-1883), had emerged in western Algeria. The French managed to occupy his territory and force him to come to terms in 1834 and 1837, but two years later he returned to the attack and drove them back to the coast.

xxxxxIt was at this point that the French government opted for all-out war. The French army was increased to 100,000, and Abdelkader and his guerrilla forces were eventually forced to surrender in 1847. Resistance was to continue but on a much smaller scale. Nonetheless, the eastern region was not subdued until 1857, and the Saharan areas were not fully controlled until 1900. Furthermore, the long years of conquest had seen a steady increase in the number of French settlers (colons) arriving in the territory. Given time, as we shall see, their determination to see that Algeria remained firmly under their country’s control was to clash with an ever-growing independence movement, put into fast forward with the defeat of France in the Second World War. When, under “Operation Torch”, Anglo-American forces landed in Morocco and Algeria in November 1942, they were seen as liberators by the native people. From that time onwards the Algerian War, beginning in 1954, was almost inevitable, as was the proclamation of Algerian independence in 1962.

xxxxxAndxto complicate matters, the French war in Algeria had brought neighbouring Morocco into the conflict. In 1844 Abdelkader had taken refuge in Morocco and forced the Sultan to support his cause. This brought about a French invasion and a convincing defeat of Moroccan forces at the Battle of Isly. Thexresult was the Treaty of Tangier in October 1844 (Va) by which the sultan was obliged to 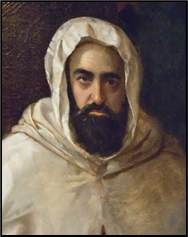 recognise France’s claim to Algeria. This settlement preserved Moroccan independence for the time being, but this was to change with the First Moroccan Crisis and the Algeciras Conference which followed in 1906.

xxxxxIncidentally, today the Algerian people regard their military and religious leader Abdelkader (illustrated) as the saviour and founder of their state. Not only did he lead his nation in its struggle against French domination, but during a period of truce in the 1830s he unified much of the country, and laid the first foundation stone of a nation in the making.

xxxxxThe French Foreign Legion, a corps open to volunteers of all nationalities, was founded in 1831 during the French war in Algeria in order to help control France’s colonial possessions in Africa. At first it attracted a large number of undesirables, such as criminals on the run, but it is now recognised as a well-disciplined professional fighting force, and has seen service all over the world. Its headquarters in Algeria was moved to Aubage, near Marseille, in 1962. Most of the officers are French, but allegiance is to the legion, not to France. Spain has a similar corps, with its base in the Canary Islands. 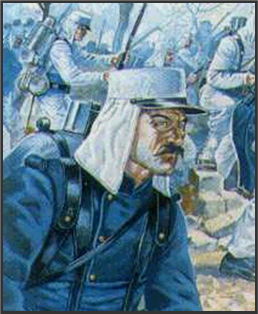 xxxxxIt was in 1831, during the French war in Algeria, that the French Foreign Legion (now generally known as the Foreign Legion) was founded. Established in the reign of Louis-Philippe, it was formed to assist in the control of France’s colonial possessions in Africa, and was provided with headquarters at Sidi Bel Abbes in Algeria. A volunteer force open to all nationalities, it at first attracted a large number of undesirables, such as army deserters and criminals on the run (a fact which provided good material for books and films!), but it very soon gained a reputation as a well disciplined professional army, and it has seen service in many parts of the world.

xxxxxThe majority of officers are from the French army and those who are not French - about half the corps - can apply for French citizenship after five years of good conduct. Allegiance, however, is to the legion itself, not to France. When Algiers gained its independence in 1962, the corps’ headquarters was moved to Aubagne, near Marseille, and its main base was established on the island of Corsica. A distinctive piece of the corps’ clothing is the white kepi head-dress, and Kepi Blanc (White Kepi) is the name given to the Legion’s monthly magazine. The Spanish army has a similar corps, based in the Canary Islands.